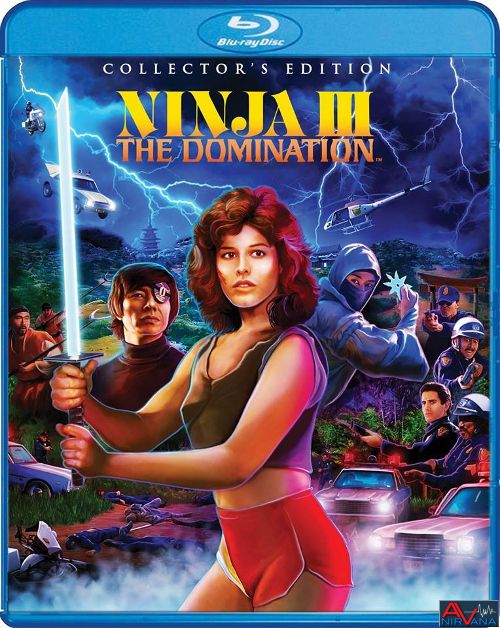 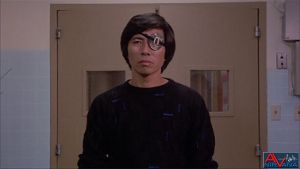 Movie
The 80s was a time of great turmoil among studios. Little indie places like Cannon Films were churning out movie after movie in epic fashion (watch the documentary about them, it’s absolutely incredible) and they were one of the driving forces behind the “ninja” craze of the 80s. Sho Kosugi never really made it big in the states compared to others, but the Japanese martial artist had a fairly lucrative career in Cannon Films library, pushing out films like Black Eagle, Enter the Ninja, and Revenge of the Ninja. Tying up the Ninja trilogy in 1984, he came back one final time to co-star in Ninja III: The Domination, a sequel that’s really not a sequel per se. Each of the three “Ninja” movies star Kosugi as a lead, but he plays a different character in each one, and sometimes not just a hero (in Enter the Ninja he played the villain opposite Franco Nero), but Ninja III is by far the most hilarious bit of ineptitude in the entire trilogy. It’s one of those movies that you sit around with friends, drink a TON of whiskey and have an epic bad movie night around.

Ninja III: The Domination was actually released by Scream Factory several years ago, but this time Shout/Scream has gone back to the drawing board, giving it a brand new 4K master and collector’s edition status by upgrading the 2 special features on the original Blu-ray, to a hefty array of brand new ones. Sadly I never actually picked up Scream’s original 2013 Blu-ray, and hadn’t even SEEN the film since since the VHS days, so I can’t compared video between the two, but Scream’s 2013 release was given high marks for video, and this 4K mastered collector’s edition is no slouch in that department either!

It’s almost difficult to really categorize Ninja III. It’s part Flashdance, part The Exorcist and part Ninja film all in one crazy wrapper. The film genre bashes and bends itself back and forth along the spectrum, starting us out with a ninja going crazy on a golf course in a murderous frenzy, only to be gunned down by 30 police officers minutes after escaping. There’s no explanation why this ninja is over here in full traditional garb. No knowledge of who sent him. Just the knowledge that this ninja has gone berserk and slaughtered a good 20 or so people (in hilarious fashion). Stumbling away getting shot 30-40 times (yeah, I’m not kidding) and showing no signs of bullet wounds, the dying ninja comes across telephone worker Christie (Lucinda Dickey), wherein he passes his Ninjato sword on to her. 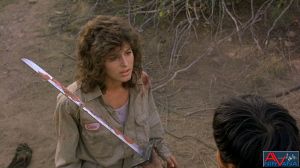 Poor Christie goes back to her daily grind as a telephone worker and Aerobics instructor (this IS Lucinda Dickey, there had to be dancing in her somewhere), but the sword has a mind of its own. Calling to Christie, the blade’s magical powers imbued on it by it’s dark ninja master transport the spirit of the black ninja INTO her body begins to transform her into him. At first Christie doesn’t know what’s going on, but she begins to lose memory time and time again, and more and more dead cops (the same cops who killed the black ninja) end up dead. However, there is hope, as only a Ninja can defeat a ninja, and a mysterious Japanese man (Sho Kosugi) is watching the proceedings with intense interest.

Does it really matter what happens in the movie? We all know what’s going to go down. Christie becomes the black ninja in part, kicks some serious cop butt (who are all walking clichés), and Sho Kosugi comes in to stop her. This is one of those movies where the lunacy maxes out at +15, and you just hang on for the ride to stop. Ninja III has it all. Hot dancing girls, hokey dialog out of 1970s exploitation film, bad cops, good cops, Aerobics outfits, Ninjato swords, AND an arcade game that transmits a ninja’s soul into Christie to boot! Yes, this is the kind of film Ninja III is, and the cult following behind the movie has proven the absolute insanity of it all is just plain fun. 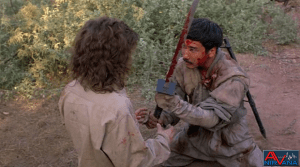 As I mentioned above, I never got around to picking up the 2013 Blu-ray so I can’t compare to the two encodes, but supposedly Scream Factory is touting a brand new 4K master from the source elements, and I have to say. It looks REALLY nice. The opening shot is a bit heavy on the grain, but once the ninja heads out into the golf course, the movie cleans up very quickly. Being that this is an 80s movie shot on a shoe string budget, there will be a nice grain layer to the film, with some scenes looking heavier than others, but the overall clarity is a FANTASTIC upgrade from that beat up old VHS I used to own, and a super impressive example of how good and 80s film can look. Colors are bright and well saturated (even that fake orange blood that was so common in the day), and the contrast is evenly balanced on the disc. Shadows are intricately detailed, and we can even see the little makeup and eye liner marks on Christie’s face with impeccable details. Simply put, this is an EXCELLENT looking disc by Scream Factory, and really shines on Blu-ray. 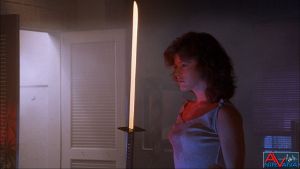 Ninja III has transferred over the same 2.0 DTS-HD MA track from the 2013 disc, and it is a solid representation of the film. The dialog is well placed in the front of the room, and the movie’s minimal sound effects come through with razor sharp audio clarity. The sounds of clanging blades, or the techno pop synth music of the day is given amply room to shine, and there’s even some decent baked in LFE in the track. Being that the movie was shot without 5.1, I’m glad Scream has decided to keep the original stereo mix instead of trying to upmix it to 5.1, as the movie sounds great on its own, just without the trappings of a typical surround mix.

Shot in just under 9 weeks, Ninja III: The Domination is the perfect example of an awesome awful movie. There’s very little technically redeeming about the film, but it works on a level where bad is so bad that it’s just plain awesome. Sho Kosugi actually plays a fairly laid back role in the film compared to the previous two, but we still get to see several ninja scenes where he and the black ninja get to go toe to toe (including a zombie ninja scene…. Yes, you read that right. Zombie ninja scene) and get it on. Scream Factory’s new 4K mastered Blu-ray looks amazing for such a low budget Cannon film, and the new extras are a real tread. I haven’t personally compared the new video encode to the highly touted 2013 disc, so I can’t tell you just how good an upgrade it is, but the new extras, new packaging (which includes the original art on the reverse side of the insert) and the 4K master makes this a VERY enticing package to buy.

Man I need to watch it again. As a kid it was a fun watch. Loved watching Lucinda
Revenge of the Ninja was also awesome.
Thanks for the review!

Michael unless I am wrong Sho started in Revenge of the Ninja not Return of the Ninja like you mentioned in the first paragraph. I looked it up to make sure and I don't see any of his movies with a Return title. Just in case you need to edit my friend

lol, you're right. that's what happens when you go by memory instead of double checking. fixed

Thanks for the review. I missed this when it came out. Will look for it.

Michael Scott said:
lol, you're right. that's what happens when you go by memory instead of double checking. fixed
Click to expand...