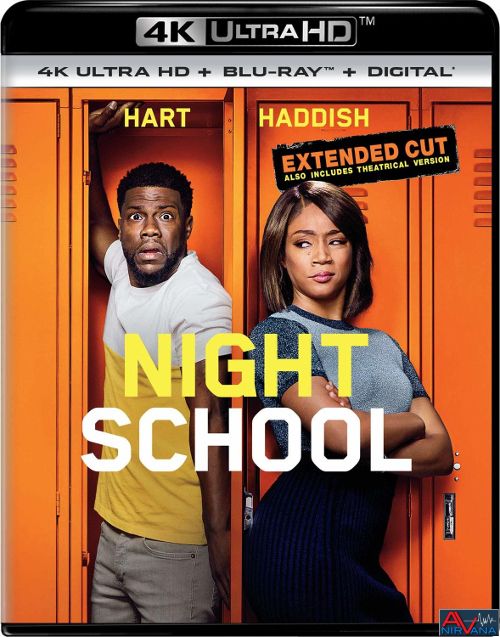 Movie
Kevin Hart is a “love him or hate him” type of comedian. When he first burst out onto the comic scene some years back he was reasonably funny and had a great schtick as the “little guy” (quite literally in fact). It was funny, decently fresh, and I liked his stand up routine. However his style hasn’t really changed at all over the course of the last decade and his admittance into film acting means he’s bringing the same tired old jokes into each and every movie. He’s loud, obnoxious, and completely unfunny in this humble reviewers opinion. I’ve chuckled here and there, and if offset with a good leading partner (or put in a side roll) he’s actually not that bad. I loved Central Intelligence due to his and The Rock’s chemistry, but everything the man has done in a leading role has been underwhelming at best.

With Night School we are getting more of the same. If you’ve seen one Kevin Hart film, you know exactly how this one will play out. Kevin plays a veritable man child, obnoxiously vehement about his lack of social and physical stature, and dating WAY over his pay grade (both in looks and finances). He has to go prove something to the world and himself, complete with shrieking and squealing like a 12 year old until he inevitably comes out on top. Cue the credits rolling, the end.

Teddy (Kevin Hart) is not your greatest student. The day of his SAT test he panics and runs out of the building, becoming the only person in his immediate family to have not graduated high school. Years later he’s got a great girlfriend named Lisa (Megalyn Echikunwoke), a fancy Porsche, aaaaaaaaaaaaaaaaaaaaaaaaaaaaaaaand is barely making ends meet as a BBQ salesman. He’s over stretched, over stressed, and over compensating as he’s getting ready to make his highly successful girlfriend into his bride. After he destroys his boss’s BBQ company (literally), Teddy is offered a finance position by his best friend. The only catch is that he has to get his GED in order to be considered for the job, and that means that Teddy has to buckle down and get it.

Thinking he can just go back to his old high school and schmooze his way into a diploma, the high school dropout returns to his old haunt only to find that his high school nemesis Stewart (Taran Killam) is now principal. This means that Teddy has to actually do what he never wanted to do. WORK for his diploma the old fashioned way and take night school to do so. Not wanting to let Lisa know that he’s slumming it at night school, Teddy enrolls in hopes of schmoozing the lovely Miss Carrie (Tiffany Haddish) in another unsuccessful attempt at passing without work. Instead Teddy has to dig down deep within himself and find out if he actually has the will to make it in a subject that he declined over a decade ago.

Night School doesn’t bring much new to the table. You know exactly what you’re going to get before going into the film, and you get exactly that. Kevin Hart is an annoying man child, and Tiffany Haddish is the most over rated comedian of our times. I honestly do not understand the appeal of the woman as she can’t tell a joke to save her life. Even her last stand up gig bombed so horribly that it was actually news worthy for a week or so this last month. Rob Riggle does his normal goofball schtick, and it’s really only Mary Lynn Rajskub (everyone’s favorite tech nerd in the Kiefer Sutherland series 24) that made me crack a smile every once in a while. In fact, this is probably the film’s worst flaw. It’s not that it’s painful to the extreme. It’s not that it’s bad script. It’s just that the actors aren’t FUNNY in their roles. I think I cracked a smile twice, and the rest of the time I spent looking at the screen with a puzzled look on my face wondering if this was actually supposed to be a comedy.

Rated PG-13 for crude and sexual content throughout, language, some drug references and violence (Theatrical) / Not Rated by the MPAA (Unrated Cut)

Sourced from a 2K digital intermediate, Night School is on the upper end of the 2K – 4K upscales. Usually these products show mild increases in clarity and detail levels, and rely solely on the advantages of HDR (or Dolby Vision) to get most of the “wow” factor in there. This time there’s actually quite a tasteful increase in sharpness and clarity, giving us a brightly colored film that just looks that much better than the Blu-ray. Kevin Hart’s facial tics and details stand out as very organic and textured, while the Night School office type setting shows wood grain, nicks in the chairs, and even little bits of hairs and fibers on clothing. Colors are bright and shiny with lots of pop. The oranges, pinks, and various shades of clothing really standout to the viewer, and even backdrops with cherry red cars, or the yellow lines of a street divider all pop with visceral power. Black levels are deep and inky, with great shadow detail, and I couldn’t detect more than a light kiss of black crush. There’s some soft wide angle shots here and there, as well as the night time raid which doesn’t exactly lend itself towards incredible clarity, but overall this is a very impressive looking 4K UHD disc and a healthy upgrade over the Blu-ray.

For being a comedy, Night School is surprisingly robust and energetic. Instead of the usual DTS-HD MA or the more popular Dolby Atmos, Universal has once again gone with the less common DTS:X competitor to Atmos. While I’m always puzzled about what prompts a studio to use Dolby Atmos for one film and DTS:X for another, the results speak for themselves. Like a usual comedy, Night School has plenty of front heavy dialog centric portions of the run time, but it is mixed in with plenty of heist like hijinks and stupidity to fill out the surrounds and overheads with more than their fair share of activity. Explosions are punchy and powerful (yeah, car crashes and booms DO show up), as well as the graduation night party adding some heft to the room’s dynamics. The musical score adds a lot of low end to the track, and keeps things pumping from beginning to end, but I was actually surprised at the use of the overheads in a dumb comedy flick. The explosion really shows off the overheads, but there are ambient noises when someone falls from a building, or the creaking and groaning of the school with ambient effects. It’s not a Transformers level of immersion, but Universal’s object oriented track is more than good enough to be exciting and engaging. Way more than I honestly anticipated of the film.

• Extended Cut
• Feature Commentary with Director Malcom D. Lee
• Alternate Opening
• Deleted Scenes
• Gag Reel – Prepare to laugh (or cry) yourself silly through this hilarious montage of behind-the-scenes antics performed by the cast of NIGHT SCHOOL.
• NIGHT SCHOOL'S In Session – Ring the bell as we introduce you to NIGHT SCHOOL's band of misfits.Who's the Student? Who's the Teacher? – Fans were thrilled to see friends Kevin Hart and Tiffany Haddish starring in their first film together. In this piece, the comedy titans give us their backstory on how they became ride-or-die friends more than a decade ago.
• Prom Night Revisited – Take a trip down memory lane as the cast of NIGHT SCHOOL looks back at their own high school proms. You'll never guess who dressed up as a famous movie character and who never made it to the dance at all.
• Cap 'n Gown 'n Giggles – Teddy may deliver a heartfelt graduation speech, but behind the scenes cast and crew were exploding with laughter as Kevin Hart's speech turned into a full blown standup comedy show.
• Making of the Dance Battle – Take a sneak peek into the dance rehearsal of the infamous prom night dance battle.
• Christian Chicken – When Teddy gets a sign from the Lawd to sell precious poultry, it only makes sense that he take it global. Check out this never before seen Christian Chicken commercial that was simply too delicious to air.
• Game Over – Our favorite misfit, Teddy may be the class clown but he's not fooling the ladies who keep him in check. Watch as Kevin Hart joins cast mates Yvonne Orji and Megalyn Echikunwoke to discuss the complicated relationship between Maya and Teddy.
• Extended Performance "El Sueno" – Every prom needs a hit song and this extended version of Luis's original "El Sueno" is sure to make you swoon.

​
Night School boasts some great technical specifications here. The Blu-ray is great, the 4K UHD looks even better, and the extras are pretty solid considering how poorly they’re usually treated on home video these days. However, it can’t get past the one major flaw of the entire package, the movie itself. Kevin Hart’s one trick “schtick” has long since worn out it’s welcome, and while I did love Central Intelligence (pretty much only because of Dwayne “The Rock” Johnson), the man just doesn’t hit my funny bone. The same thing goes for Tiffany Haddish, who is being rammed down consumer’s throats even though she can’t tell a joke to save her life. Rob Riggle’s inclusion automatically means the movie is going to be dumber than a brick, and with Kevin Hart playing his normal “shrieking man child”, I couldn’t find much to like about the movie. Personally, it’s a low rental at best, and skating really close to an auto “skip it” rating as it is. Proceed with caution.