Night of the Creeps: Collector's Edition 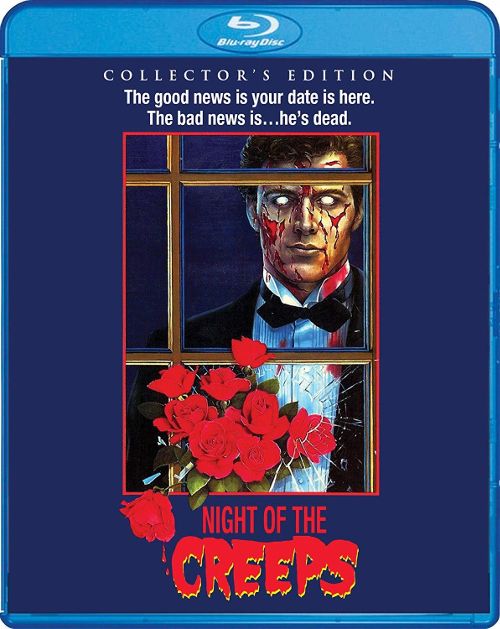 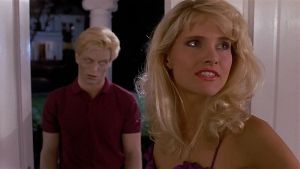 Fred Dekker is an interesting one hit wonder from the 80s and nineties. He wrote a handful of 80s movies and 90s TV shows (including a couple of episodes from Star Trek Enterprise around the turn of the century), but largely vanished from directing and writing up until last year when he wrote the screenplay for The Predator. However, he directed some interesting movies in the early 80s with films like Monster Squad and the horrific Robocop 3. But his crème de la crème will always be 1986’s The Night of the Creeps, a sort of mishmash of science fiction, horror, comedy and throwbacks to the 1950s (the opening scene is a black and white sequence set in 1959 that sets up the big bad monsters of the movie). Of all his films this is probably the most fun and the most inventive of his movies, and also happens to be his feature film debut as director.

Sony released Night of the Creeps 10 years ago (almost to the month), but it was sadly ONLY the director’s cut of the film. A faux pas that fans were a little sore about, but most of us got over it considering the Director’s Cut was not that much longer than the theatrical and wasn’t a WILD amount different. Now, in true form, Scream Factory has decided to give the old film a new release, complete with the missing theatrical cut (on it’s own disc I might add), as well as restore the original poster art for the slip cover, AND a whole bevy of new extras that really make this jam packed with goodies.

Night of the Creeps is one of those movies that is so good at being a BAD movie that those who aren’t familiar with the horror and science fiction influences of Dekker’s time may not completely grasp where the film is going. It has a goofy script that is all over the place, but somehow works. Is full of 80s nudity and crassness while being sweet and romantic. It plays loosely with the horror genre, and while it has a some guts n’ gore moments, tends to play heavily towards the science fiction genre more than scares and thrills. Lets just say that Dekker’s first film is a romantic love letter to the monster movies of the 1950s, updated with 1980s sensibilities and R ratings, while still playing fast and loose with the popularity of science fiction and gore that was prevalent at the time. The entire film is winking and nodding at the cameras, from the opening shot of the alien spaceship, to the brain bugs skittering across the lawn (something I think that Slither copied some 15+ years later) and if you’re careful at picking out the genre influences, the humor is more than a bit obvious. 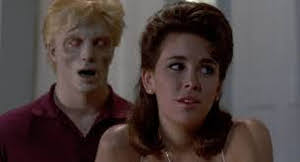 In 1959 California, and alien experiment gone awry crash lands in the surrounding hills, and ends up infecting a young man at the time. However, his alien infestation is cut short when an axe murderer hacks up his girlfriend and leaves him for dead. 27 years later (1986) the alien infested youth has been unknowingly cryo-frozen at the bottom of a university medical lab for science’s sake, where he is found by two nerdy frat pledges named Chris (Jason Lively) and his roommate J.C. (Steve Marshall), who are tasked with finding a cadaver and putting it on a rival fraternity as a prank. Unknowingly they stumble upon the 1959 frozen human Popsicle and end up awakening him. Unfortunately for them, the human popsicle’s alien infestation isn’t just relegated to being in his body, and soon incubates and bursts forth to reign terror on the entire campus.

In typical 80s fashion, Chris is nerding out over the lovely Cynthia (Jill Whitlow) and figuring out a way to woo her away from her jock boyfriend Brad (who hams it up as the typical 1950s style “Biff” or “Chad” type of boyfriend), and the invasion of the brain munching creatures who turn people into zombies are a way for the boy to shine. Teaming up with an aging police detective (Tom Atkins), who happens to be the old boyfriend of the 1959 girl murdered by the axe killer, Chris sets out on a mission to rid the campus of undead monsters before its too late.

Fred Dekker’s Night of the Creeps is a bonafide classic and cheesy to the core. Dekker spends copious parts of the run time interjecting little winks and nods to the camera, and infuses each scene with a sort of nostalgic feel to them. Even the opening scene with the rubber suited aliens is subtitled (for the viewer) with classic sci-fi fonts, and then shoots us straight to a black and white 1959 on Earth where we get to see the old white picket fence style culture get invaded by the little buggers. The 1980s part of the movie is much more brash and confident, complete with 80s one liners, random nudity (a staple of the time) and touches of gore and paint colored blood everywhere. The film could be written off as a movie that was of “the time”, but it has grown into a kitschy classic that much like Slither, is just so good that it’s bad, and so bad that it’s watchable time and time again.

Rated R By the MPAA 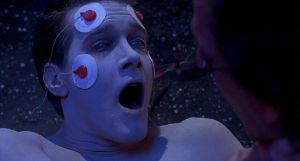 The 1.85:1 AVC encode for both the theatrical and Director’s Cut (both are given their own dual layer BD-50 discs) seem to be sourced from the same master that the 2009 transfer was cut from, and mostly likely due to the fact that Sony hasn’t updated the master in quite some time. Comparatively the two are very similar, with only slight tweaks to the contrast levels and colors to show any perpetual differences. The old 2009 disc was considered very good at the time but it is a bit dated compared to other catalog titles who have been upgraded to 2K and 4K masters. There’s some speckles and debris on the print, and the grain levels can spike a bit in certain scenes (when Cynthia is looking out the windows it gets really obvious). Blacks are very solid, and the movie generally is a very clear and precise looking film. Primaries pop off the screen, such as the orange/red blood that spurts up now and again, to the bright yellow of J.C.’s black and yellow shirt. Facial details are crisp and clean, and the overall presentation looks quite good outside of the speckles and noisy grain.

Like the video, the 5.1 DTS-HD MA track appears to be a direct copy of the 2009 disc as I couldn’t tell a lick of difference between the two when A/Bing them. However, there is a nice addition of a 2.0 DTS-HD MA downmix for night listening on the 2019 disc from Scream Factory. The mix is clean and clear, with good vocals most of the time, but ever so often I noticed a dip in dialog volume that would come and go. Surrounds are active with the sounds of flame throwers and shotgun blasts, and even the subs get a bit of a workout now and again. The track is typical of the 80s low budget horror films in that it sounds a bit thinner than normal, and has a few crackles and hisses in the background, otherwise this is a very solid mix that delivers the goods.

Night of the Creeps is a fantastic genre mashup of horror, comedy and science fiction, and Scream Factory has done a fantastic job with this collector’s edition. Sadly the video isn’t given a new 4K or 2K scan like they usually do (I’m assuming it’s because Sony tends to give them the masters they have on hand and not allow Scream/Shout Factory to do their own master), but the inclusion of the theatrical cut as well as a TON of brand new extras (and the fancy new artwork) really do make it worth the upgrade over the 10 year old Sony Blu-ray. A totally fun cheesefest that is worth it in every way, Night of the Creeps: Collector’s Edition gets a hearty 2 thumbs up from this 80s boy.

Thanks for the review. I remember watching this one long time ago. Will have to revisit this one.