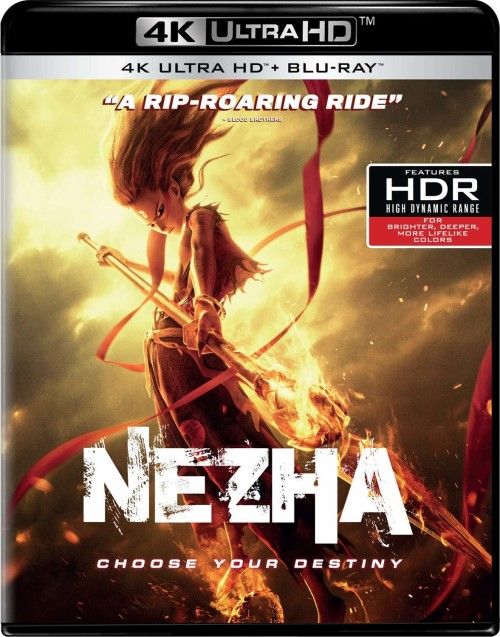 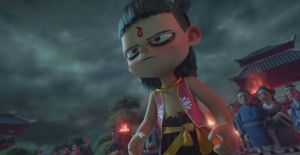 Movie
I’ve been excited for Ne Zha for a while now, as this was Well Go USA’s second 4K UHD release (the first being the awesomely stylistic period piece film Shadow) and it looked to be a GORGEOUS looking film from the trailer. Sadly this is another in a long list of Chinese films that were shot in 3D (the stand out effects pretty much clue you in to that fact) that will never see a 3D release in the United States home video market. That’s mainly because 3D TVs and the 3D Blu-rays/4K UHD discs are pretty much dead in the U.S., while they’re alive and well across the pond in China. Not really much we can do about that as the fans have spoken in the U.S. home video market, but it would have been really neat to see this lavishly animated film in all its 3D glory. That being said, the movie is still quite a bit of fun in the “flat” 2D presentation, with the 4K UHD and Blu-ray discs both being stunning visually and audio wise.

The story starts out with an epic battle between immortals, as immortal disciples of the most high Taiyi Zhenren and his “brother” Shen Gongbao battle a powerful entity known as the Chaos Pearl. With the help of their master, Yuanshan Tianzun they are able to separate the Chaos Pearl into it’s two parts. The first part (the good) known as the Spirit Pearl, and the other (the evil part of the Chaos Pearl) into what is dubbed the Demon Pill (though I have a sneaking suspicion that translator misheard the word for “pearl” and instead translated it as Pill, because Demon Pearl would make much more sense in the setting). A curse was laid upon the pearl, where the two halves would be reincarnated in the future, but the Demon Pearl had a lifespan of only 3 years before it was to be destroyed by heavenly lightning.

Fast forward a few years and the drunk, pig riding Taiyi Zhenren is watching over the birth of a local Lord’s child in hopes of unleashing the spirit pearl and reincarnating it through the newborn so that it could be a hero of mankind. However, Shen Gongbao has plans of his own and instead unleashes the Demon Pill (pearl) into the newborn, stealing the Spirit Pearl in the process. Realizing that what has been done cannot be undone, Taiyi puts a charmed bracelet around the newborn’s neck, controlling his demonic power to a mere minimum of what it is in hopes of giving the two new parents some time with him before the 3 year mark strikes, and heavenly tribulation strikes down the Demon Pearl

In that time period the young boy, Ne Zha, begins to grow up, but he is sequestered behind a magical barrier. His only hints of joy are sneaking out and terrorizing the villagers who are obviously afraid of him, and having fun with his worried parents. In an effort to break the curse around him, Taiyi offers to train the young man in the ways of the immortals in hopes that he can do enough good deeds in his life to alter his fate. Or at the very least, keep the young boy happy and distracted before the inevitable 3 year mark hits. However, no matter the training, Ne Zha’s dark powers keep trying to seep through, ruining whatever plans Taiyi and his parents have for him, until he runs across another young man. This one with powers opposite of his own and a secret that is just as deep as the mysterious powers that fuel Ne Zha.

Ne Zha deals with the classic discussion about nature vs. nurture. The idea that just because you were born with inclinations or bents doesn’t mean you can’t change yourself for the better, and hopefully change your destiny. As both Ne Zha and the mysterious Ao Bing (the other boy with powers) being their friendship, they learn the burden of having people depend on you, as well as the realization that their destiny is their own. No matter what others have put upon their shoulders, and no matter what they WERE on the surface.

The story is pretty straight forward, but it’s fun and light hearted. The movie thrives off of silly humor and stunning visuals more than super deep narration. We’ve seen the idea of “I make my own destiny” before, but the cheeky Chinese humor and the absolutely stunning action pieces make for a jaw dropping watch. The film itself is far from perfect, but I found my self really enjoy the lush visuals of the movie, as well as the stunning action set pieces. The end 25 minutes with the giant battle between dark and light was probably the most fun I’ve had in weeks, and the unique characters from Chinese mythology makes for a very engaging film.

The already stunning Blu-ray release is overshadowed by an even better looking 4K UHD disc. Many times animated films don’t show a whole lot of increase in clarity and depth when moving from 1080p to 4K UHD (usually due to animation not having enough detail levels to really show much improvement due to source animation), but Ne Zha is a great improvement, with even more detailed backgrounds, and the use of HDR really REALLY making a difference with all of the colors. Everything just pops more, and the slightly rubbery characters (a side effect of the animation) look a little more robust and sharp around the edges than the Blu-ray. Black levels are superb, and the banding I saw in the Blu-ray release is pretty much eliminated here. All in all, a fantastic 4K UHD release, and a great looking film in general.

Here’s the strange thing. Usually Well Go USA is VERY good about putting both the original language track and the English dub (if there is one) in the same lossless mix, but for some reason they put the English dub in Dolby Atmos, but relegated the original Mandarin track to DTS-HD MA in 5.1. Now, this isn’t the end of the world, but it does create a slight conundrum. The English audio dubbing is not that great, while the Mandarin track is decidedly better on the voice acting. However, the better SOUNDING audio mix is going to be the Atmos track, as it adds a really great sense of dimensionality, pushing the 5.1 mix slightly down the food chain. Both are good mixes, but it’s sort of give and take here.

The Atmos track is stunning, creating a powerhouse effect with the constant battles and training of Ne Zha, and is a bass lovers dream. The crashing down of the ice that Ao Bing creates is earth shattering, while the surround usage is amazing. The overheads are used quite a bit with some of the aerial battles, and the dialog is always clean and clear. The 5.1 mix doesn’t have that airy and light directional shifts that you hear in the Atmos track, along with some slightly crushed dynamics (in comparison, because the dynamics in the 5.1 mix is still incredible). I’m giving the audio score a 5/5 rating for the Atmos mix, while a 4.5/5 rating for the 5.1 DTS-HD MA mix. Either one is great, but your choice of which language track you choose will be dependent on if the more intense Atmos mix is more important, or if voice acting is more important. 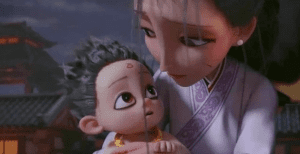 For those of you who watch a lot of Chinese fantasy you may notice the name Ne Zha sounds familiar. That’s usually because he’s a side character in dozens of Chinese fantasy films, with the most notable ones being The Monkey King series (I’ve reviewed a few of those here as well). But here we get to see a full animated film with the character, and despite some reservations about character development and rote story tropes, the film turned out much better than I though (film wise). The 4K UHD is nothing short of fantastic, with great video, AWESOME audio, and of course the typical anemic extras that we’ve come to expect from a Well Go USA release. Definitely a fun watch.