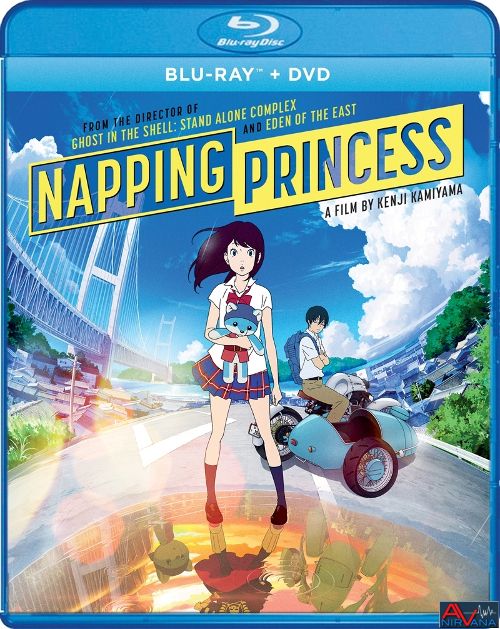 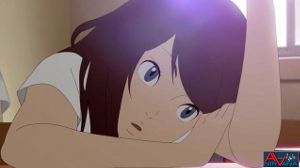 Movie
Kenji Kamiyama is a legend among Japanese “anime” culture, having spent years in the animation department for countless hits (Akira, Blood: The Last Vampire, Jin-Roh: The Wolf Brigade) and then moving into the director’s chair some years ago. You might remember that he was the major director for Ghost in the Shell: Stand Alone Complex (and the associated feature films based in that timeline), Eden of the East, and the new 009 Cyborg series that has made him an icon to the anime community. So naturally I was more than a bit eager when I heard that Ancien and the Magic Tablet was coming to fruition. Months and months went by after it was released in Japan and I was getting ANTSY to see it. I resisted the urge to pick up the VERY expensive import and then I noticed when browsing the upcoming movie releases for Shout Factory that there was this film called Napping Princess on the front page, and it looked EXACTLY like Ancien and the Magic Tablet. Yup, it looks like it got a remake for the English speaking audiences (although Ancien and the Magic Tablet is still a tag line on the cover) and Gkids was finally releasing it through Shout Factory.

Digging in, I am not at all disappointed with the movie at all. Kamiyama has a masterful take on down to earth drama, and the blend of fantasy makes it so much sweeter. The story opens up with a monologue about a fantastical world called Heartland. There everything was about new cars, following the rules, and a little princess, named Kokone, who has magical powers. Locked up against her will because of her sorcerer abilities, Kokone has to to watch as a giant monster is set to ravage the world of Heartland, and only her magical abilities can save them. Jump out of the magic kindgom for a bit and we get to the meat of the story. Kokone Morikawa (Mitsuki Takahata) is a bubbly girl living outside of Tokyo, and just about to step out into the real world for the first time. Her father is a kind hearted mechanic who forgoes much of his profits to help out the elderly and poor folk of the community with this skills. When her father is arrested for having a tablet with some important information on it, Kokone and her friend Morio (Shinnosuke Mitsushima) have to escape the clutches of a bearded man intent on capturing the tablet as well as unravel the mysteries of her own past. 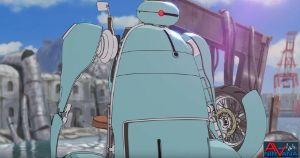 I’m not going to go TOO deep into what happens, as part of the fun of the movie is following the strands of the fantasy world and the “real” world back their origination. Kamiyama crafts and incredibly complex, yet simple, tale that acts as a stepping point for the legendary director’s career. He’s usually known for his hard sci-fi and crazy fantasy films, but Napping Princess is a much more lighthearted and whimsical affair. It weaves traditional fantasy in with real life drama in a way that is actually rather clever and innovative. It’s not obvious from the get go, but as the viewer watches the film you start to see why the fantasy element is what it is. Kamiyama lovingly paints a tapestry that uses the fantasy as an allegory for the real life drama and pain that is under the surface of Kokone’s real world experience. Without that the movie becomes a much darker and much less poignant story, in my opinion.

What makes the film so well done is not the high flying fantasy, nor the down to earth drama, but the subtle nuances to the characters. Kokone is a sweet and lovable girl, but there is an underlying thread of pain and longing that she has over the knowledge that she never knew her mother. As she comes closer and closer to the truth about the tablet you see her character unfold with this newfound longing and desire. Kamiyama never makes it overly heavy handed, nor does he treat it flippantly either, instead allowing the story to slowly unveil the little underpinnings that make it so moving. All of the other characters are well acted as well, but besides Kokone’s father, Momotaro (Yosuke Eguchi), they are just their as support for Kokone’s journey.

The 1.78:1 AVC encoded Blu-ray from Shout Factory looks absolutely magnificent, with a brightly colored film that just sparkles on Blu-ray. The animated movie looks very similar in many ways to how Eden of the East looked, so the animation style and the bright colors that just pop off the screen will be easy to love. The CGI animation looks nearly flawless, with no signs of banding or other anomalies to mar the picture. Lines are smooth and clean, while individual detailing of the characters and locals are spot on. It’s not as sharp as a perfect 5/5 film, but overall the clarity is quite appealing with the bright colors and well done animation. The scene where Kokonu goes into her napping fantasy world look incredible, as does the final battle with the Colossus. Blacks are deep and inky, and I really couldn’t spot more than 1-2 instances of banding.

Just as exciting and well done is Shout Factory’s 5.1 DTS-HD Mixes. Like usual, the Gkids sourced film is given a 5.1 lossless Japanese AND English mix, as well as a 5.1 Dolby Digital track in French as well. A/Bing between the two tracks shows very little dfiferent besides the dub itself, and the track features English “Dubtitles” as well as traditional Japanese to English translated subs as well. The Japanese track naturally (duh) gets my vote for the better of the two due to the original voice work used, but either one will be more than servicable for the listener, as the lossless tracks are fantastic. Vocals are crisp and cleanly locked up in the center of the room, while the surrounds are given a lot of heavy lifting with as the fantasy action really puts the listener in the center of the immersive track. The Tokyo train station is full of wild activity, and the battles show off some nice LFE (not too overpowering, but still great and punchy).

Napping Princess is a sweet and enjoyable story that emotionally resonates with people of all ages. Much of the allegorical nature of the story won’t be understood by younger audiences, but the fantasy elements and the adventure of the movie will easily allow them to stay just as engaged as the older generation. Shout Factory’s Blu-ray releases of the animated film is amazingly done, with great audio and video, and even a healthy dose of extras added in as well (something sorely lacking in modern anime movies). I had a blast with the movie, and really do give it a solid two thumbs up. Highly recommended.