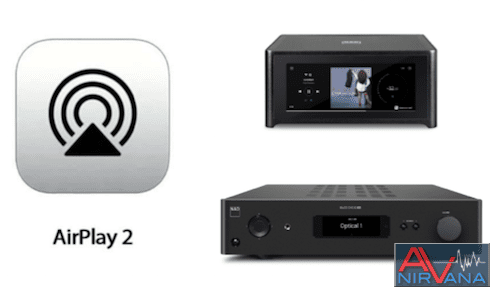 (July 30, 2019) Buckle your seat belts; the AV news machine is about to kick into overdrive as we approach CEDIA 2019. Today, NAD Electronics officially introduced Apple AirPlay 2 functionality to several models in its lineup, including its high-class C 658 BluOS Streaming DAC and Masters Series M10 BluOS Streaming Amplifier. That means owners can stream audio content from their Mac, iPad, or iPhone to either device, while also reserving the ability to control playback using Siri voice control.

First introduced nearly a decade ago, Apple’s AirPlay has remained one of the industry’s most popular streaming technologies. Relying on a local Wi-Fi network, AirPlay has a maximum bandwidth of 36 Mbps and offers notably stable lossless audio transmission. And its second-generation AirPlay 2 protocol further boosts performance by introducing the ability to stream and control music to multiple AirPlay 2 devices spread around a home.

Owners of both the C 368 and C 388 Integrated Amplifiers can also hop on the AirPlay 2 wagon by purchasing a newly available BluOS 2i MDC module designed to be installed in a rear upgrade slot. For more information about pricing and availability, contact a local NAD dealer.

“We are proud to be able to offer Apple AirPlay 2 compatibility to our NAD users,” says Cas Oostvogel, Product Manager for NAD Electronics. “And we are especially proud to be able to do so with the BluOS 2i MDC module, since AirPlay 2 technology has never before been implemented in a modular solution like this, where owners of older NAD units like the C 368 and C 388 Integrated Amplifiers, which were first launched in 2016, can receive a new technology many years after their original purchase.”

NAD’s AirPlay 2 upgrade is packaged as part of a BluOS 3.4.20 firmware release, which is available for download today. Owners of C 658, M10, and updated C 368 and C388 gear will be prompted to download this update upon power-up.

Kudos to NAD for catering to popular music formats. Streaming compressed files via iDevices will go a long way toward introducing many people to better sound. The highest sample-rate MP3’s are close to CD quality, so they should sound great through this equipment. And if they haven’t already, I read that iTunes plans on making hi-res music available.