(September 9, 2020) NAD Electronics has officially unveiled yet another piece of high-class kit. This time, it’s an amplifier of the two-channel variety, set to be offered for $1,999 this coming October.

Much like NAD’s recently announced M28 Masters Series Seven Channel Amp, the C 298 utilizes Purifi’s Eignetakt amplifier technology as part of a manufacturing agreement between the two companies. Eigentakt is a re-imagined amp design that benefits from proprietary PCB layouts and advanced mathematical modeling for audio output with less noise and lower distortion. The resulting sound, says NAD, is laced with refinement at the lowest and highest volume levels.

If power demands are even greater, the C 298 can be used in Bridge Mode, which transforms the amp into a massively capable monoblock. Bridging converts 185 watts per channel output (8 ohms, 2ch) into an electric 620 watts per channel. 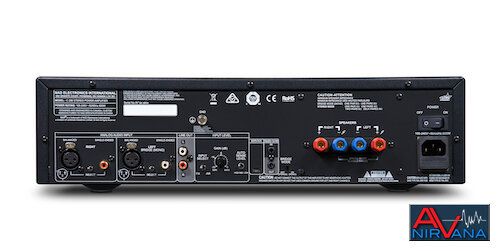 The C 298 carries quite a few additional features that make it more than just a power amp. Selectable balanced inputs provide for compatibility with studio-grade and high-end equipment alike, and a rear-mounted trim control allows owners to accurately match other components. Additionally, the included line out introduces the ability to daisy chain extra speakers or a sub. There’s also convenience features such as auto-sensing and an included ground lug for eliminating ground loops and other noise in larger multi-component systems.

“With our recent introductions of the award-winning Masters M33 and shortly afterwards the M28, we knew there would be great enthusiasm for a pure two-channel amplifier using Purifi Eigentakt technology”,” explained Cas Oostvogel, NAD’s Product Manager. “The C 298 will find many applications wherever one desires a state-of the art, two-channel amplifier or a high-power Monoblock. Within the NAD brand, the C 298 is the perfect complement to the critically-acclaimed C 658 or as an additional two channel amp for reference home theater systems.”