Myths and Legends Regarding Positive-Gain Filters when Equalizing Subwoofers ​

Disclaimer: The following relates to the use of outboard, stand-alone equalizers such as the miniDSP and other equalizers and digital speaker processors from the pro audio field.


Reduced Dynamic Range and Increased Noise in Digital Equalizers
We see it stated all the time on the various home theater forums: Never use boosted (positive-gain filters) when equalizing a subwoofer. It’s one of those myths that just won’t go away, and it’s based on a number of flawed theories.

One misconception is based on the premise that boosted filters will require the input signal of the digital equalizer to be cut back, and that will decrease dynamic range and increase noise in the A/D converter due to bit loss. This is an old-school idea that dates back to the days of 16-bit digital converters.

If a 24 bit A/D converter has a theoretical dynamic range of 147 dB, is reducing the input level 10 or 15 dB below full scale going to have an appreciable effect on its dynamic range? Of course not – not when the equalizer itself only has a dynamic range of 105 dB or less. Bottom line, modern 24-bit processors function just like analog processors, and input levels are a moot issue – hence the reason they don’t have the handy front-panel level controls they used to.

The common situation is that there are one or two peaks in the room. Those hot frequencies are what determined the volume level you set the sub to before equalization. Eliminate (cut) those peaks and you’ll now perceive that your sub is too quiet. So, you have to turn it up to compensate. Well guess what? Now you’re driving the sub harder than you were before. Well – say goodbye to any headroom you thought you conserved by not using any boosted filters.

Also, consider what happens when you make a series of cuts. It shouldn’t take much to figure out that you now have peaks in between them!

For instance, consider the graph below, which depicts the equalizer’s electronic response after equalizing. In other words, the equalization changes the electrical signal, which was originally flat. So, did we make three cuts here... 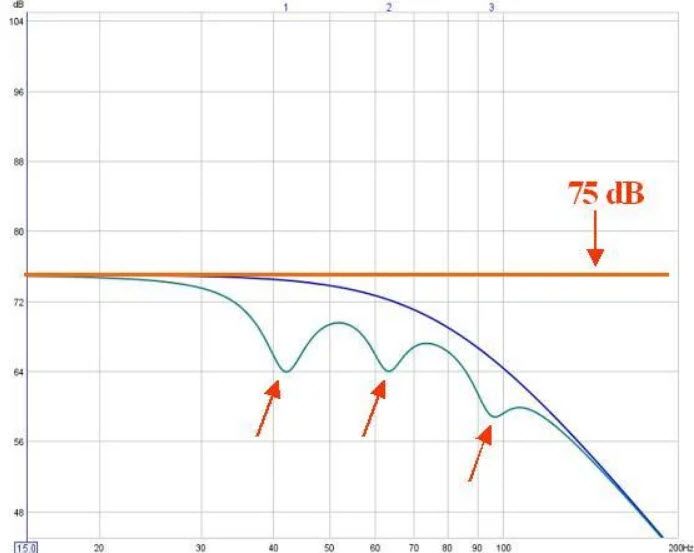 ...or did we make three boosts with a shelving filter? 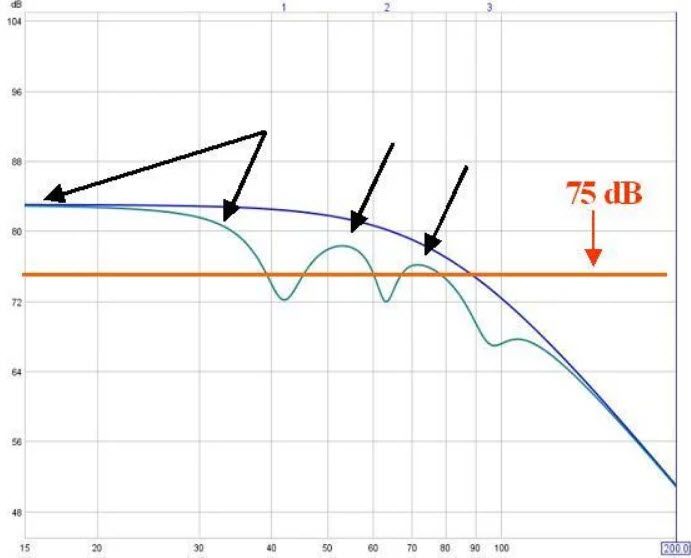 See what I mean?

Bottom line, there’s no free lunch. In most cases, equalization requires that you have ample headroom going in, because you’re going to end up with less than what you started with. If you don't have ample headroom, you shouldn’t equalize, or at best only equalize minimally.

Nullifying Nulls
Now that we know that using only negative-gain filters gets no benefit, what about trying to correct depressions? Common wisdom holds that you shouldn’t boost troughs or nulls in response because it doesn’t accomplish anything. We’re told that nulls are caused by phase cancellations, where the sound reaching the measurement point is a combination of the original direct soundwave combined with a reflected soundwave that is 180˚ out of phase (one half wavelength). When you add a gain filter at the depressed frequency, not only does the direct sound increase by the number of dB of the filter, but unfortunately the 180˚ out-of-phase signal also applies an equal and opposite signal to counteract. The result is that your dip is still there and you have wasted the gain you've thrown at it.

This theory is technically correct, but it’s based on the silly expectation that bass emanates from a subwoofer like a laser, with the primary “sound beam” reflecting off a perfectly-perpendicular wall and meeting the original “sound beam” half-way in between, 180˚ out of phase, causing cancellation.

Of course, the theory falls apart with the realization that bass frequencies are omnidirectional, not directional. They discharge from the subwoofer in all directions and in like manner bounce around the room in all directions. A quote from this article explains things nicely:

These nulls are related not only to the distance from the rear wall, but also from the other walls, the floor, and the ceiling. So in order to create a deep null a precise balance is needed, and that balance is easily disrupted by the many other reflections bouncing around the room.

In other words, since bass is omnidirectional, sound is reflecting at every angle from every boundary in the room. So while there may well be a point and / or frequency that exhibits wholesale cancellation due to a reflection being 180˚ out of phase, there is no shortage of other, non-canceled reflections present for an equalizer to work with. Plus, the equalizer introduces phase changes itself . This is why you’ll seldom see a case where a depression won’t respond to EQ.

The other problem with the “never boost nulls” theory is that it presumes all depressions, dips, troughs etc. in response are nulls. The explanation above should be sufficient to show that true nulls are pretty rare. When they do occur, it’s usually the result of a poor subwoofer location.

It’s pretty easy to identify nulls: Typically they are deep and narrow and won't respond to equalization, as we see with these graphs: 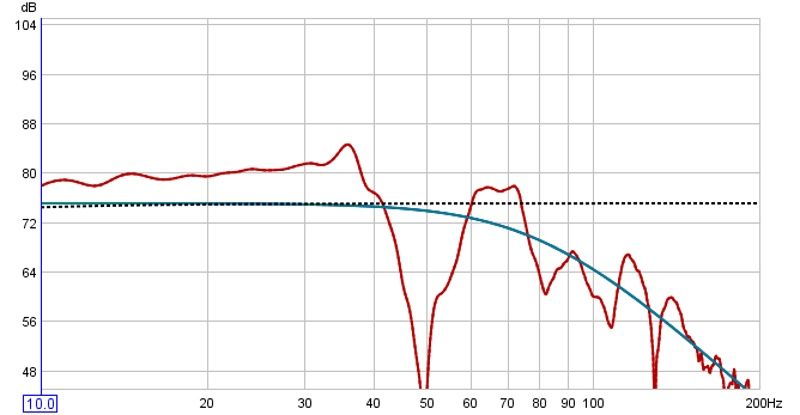 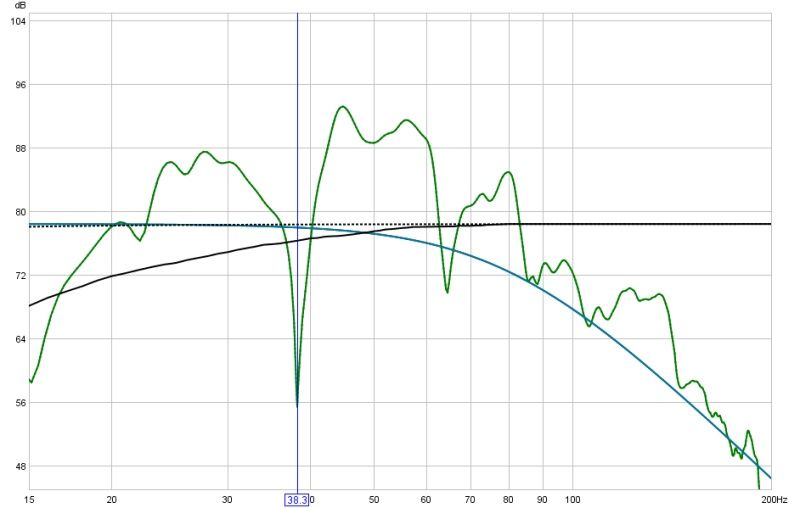 Here’s the second graph, but with EQ. As you can see, the nulls didn’t budge. By contrast, here’s a graph of a sub with a rather severe depression that boosted just fine with equalization. Obviously it wasn’t a null.

Readers may note the extreme amount of equalizing needed to achieve a nice graph in this comparison. The sub in question was a vintage little 8” M&K model I once had with my computer system. After that much EQ, it didn’t take much to over-drive it. Further evidence that ample headroom is a requirement going in. Not to mention, trying to wring 30 Hz extension out of a sub that’s essentially “done” at 60 Hz is a lost cause. Dinky subwoofers need not apply.

Wrap Up
So there you have it. Except for the case of trying to correct true nulls, which is a hopeless cause, subwoofer equalizing can be accomplished with either positive-gain filters, negative-gain filters, or preferably, a combination of the two. Either way, ample headroom is a requirement.

Really, “best practices” is to move your Target Curve to a half-way point between the worst peak and depression. That way you can minimize the amount of boost or cut, as well as the number of filters. Trying to equalize the entire curve to a sky-high Target, or a really low one, essentially amounts to using the equalizer as a volume control, which is exceedingly poor form. The graph below is a sad example of "worst practices." 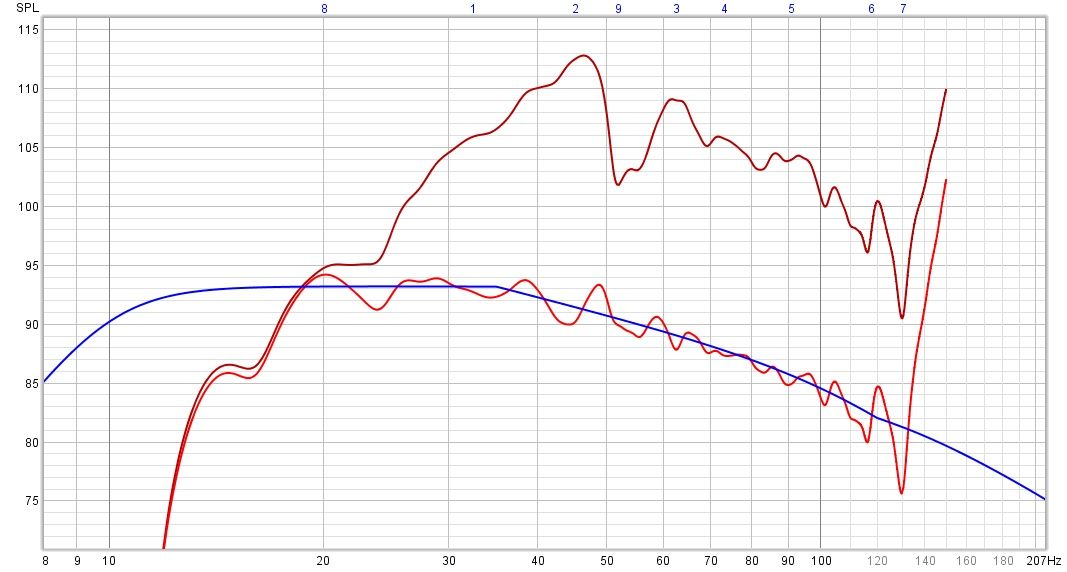 All this above is the reason why since a couple of year I use the moving mic measurements method (https://www.google.com/url?sa=t&rct=j&q=&esrc=s&source=web&cd=&ved=2ahUKEwjB5p3zg8fuAhVPmuAKHfvSB6IQFjADegQIAxAC&url=https://www.audiosciencereview.com/forum/index.php?attachments/mmm-moving-mic-measurement-part-1-pdf.66154/&usg=AOvVaw1D9-HHr1YplTkX2jzMRLPl).
I am just an amateur and not so able to identifie true nul on a graph. See the difference for my only sub in a 5.1 system.
And I use the following filters found with REW generic EQ which are the same Q and gain that the filters that I can set manually into my Rotel RSX-1562 avr. The result is a not so bad looking graph and good earing sound experience for one sub in a too small room!