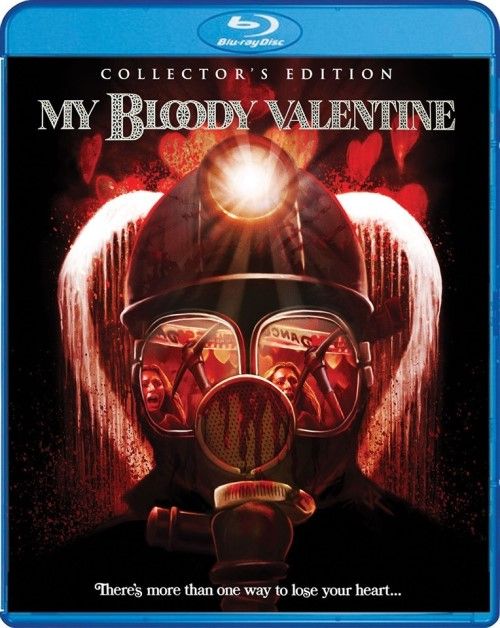 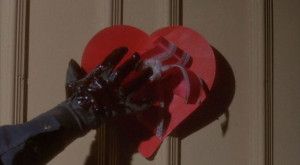 Movie
What says the joy of Valentines day this coming up week than a good old fashioned slasher film!? Much like Silent Night, Deadly Night, My Bloody Valentine is kind of a guilty pleasure for me. The film was right on the cusp of the 1980s slashers, just coming off the wave of low budget 70s horror films, and kind of paved the way for the more gory and bloody films that were to come in the next 20 years. The film was originally funded by taxpayer dollars up in Canada (the film is so obviously Canadian, as you can hear the Nova Scotian twang of “sowry, downtcha know” coming from the actors voices at every turn), and we got a strangely raw, strangely gory, and strangely entertaining horror film. Now I actually got introduced to the film when Lionsgate released their 2009 special edition of the film to coincide with the 2009 remake with Jamie Presley and Jensen Ackles, so I grabbed it along with the sequel on Blu-ray to be the completionist. Well, I ended up falling in love with the original (as is usually the case with horror sequels, as they never really live up to what came before it) and have gotten rather used to the low budget enterprise, despite it not having as smooth a story, or as good of special effects as the 2009 film.

Films like Halloween and Friday the 13th had just come to cinemas a few years earlier, and audiences were just getting used to the over the top gore and ultraviolence that would define the 80s horror genre, and at that time the MPAA and parents weren’t overly fond of the gratuitousness of these films. As such, hey went on a campaign to reduce violence in films and Paramount was forced to cut out the really gory on screen kills, shuffling most of the actual violence off screen. Thus audiences really didn’t get the full experience that George Mihalka intended. Years later during the resurgence of home video in the DVD days we were able to get the unrated cut for the very first time, which was created using the cut footage spliced back into the theatrical release. According to Director George Mihalka not EVERYTHING made it back in due to elements not being perfect, and changes he had to make for the theatrical cut negating other scenes, but the unrated cut is described as being 95% of what he wanted to originally do.

The story is really rather raw and amateurish in some ways, but also ahead of it’s time in regards to the inventiveness of the kills. Mihalka takes a slower approach than most, spacing his kills out over the 90-93 minute run time (depending on which version you’re watching), and various up the different deaths quite a bit, keeping the audience on their toes. It’s fun, a bit cheesy at times, and while not AS gory as many of the 80s slasher films, it was intensely disturbing for it’s time, and shocked more than a few movie goers. 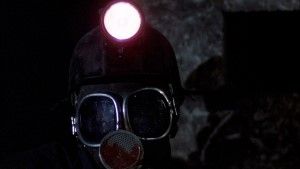 The plot revolves around a Canadian town called Valentine Bluff where a horrible string of murders happened 20 years ago due to a mining accident that trapped 5 men under the rubble. After 6 weeks of digging they finally found one survivor, Harry Warden, who had survived by eating the bodies of his co-workers. Crazed and insane, Harry start slaughtering people just before the next Valentines Day dance that the town always had (supposedly a tradition for 100 years), only to be taken to an insane asylum after it was discovered. Now, 20 years later the town of Valentine Bluff is about to have their first V-day dance since the murderous incident.

The miners have gotten off work, their girlfriends are raring to go, and the whole town is excited to party, only for the Mayor to receive a gift basket with a human heart in it with a warning to stop the party or else more deaths were to occur. However, shutting down a town wide party that has attracted tired and weary miners is not going to go over well. The libido crazed 20 somethings decide to have a party of their own in the mines, without knowing that Harry Warden (or what SEEMS like Harry Warden) has returned and slowly killing people in his iconic miners outfit, complete with breath mask and pickax.

Mihalka said in an interview that the gore would sell itself, but he was intent on making this a character drama. In some ways he succeeded as there are several sub plots revolving around a love triangle, a sheriff looking to protect his town, and a psychological aspect due to PTSD about the past. However, most of this subtext gets lost midst the gore and 20 something partying, as the audience cheerfully looks forward to the next gruesome murder. I honestly love the film to death, but I fully admit that the acting is a bit amateurish at times. There is a distinct gusto and exuberance that the actors exude, but you can’t help but notice how raw and awkward the dialog and direction is. That, however, doesn’t make the gory little murder mystery any less fun, as almost 40 years later the kills just work, and the bright red “blood” gets everywhere.

Scream Factory proudly announced that both the unrated and theatrical cut have been given new 4K scans for this release, and instead of being squished on one squished on one BD-50 like the Lionsgate release, has each version of the film presented on it’s own dual layer BD-50 with expanded bitrates. The two versions look virtually identical to each other, with only minute differences noticed in a couple of the kill scenes where the extended footage was added, even though those differences are largely nitpicking. The results are fabulous, as the 39 years old movie looks exceptional on home video. The bright red/orange blood and garish Valentine’s Day decorations pop off the screen, as does the bloody kills, and various nuances to Valentine Bluff. Greenery and shrubbery is nice and sharp, and skin tones (while a bit ruddy) look very balanced. Fine detail is exceptional, from the cheap special effects to the rough hewn miner’s outfits that the boys wear. Blacks and darkness are exceptional, and even in the under ground cave I couldn’t detect more than a few grain spikes and some mild crush to mar the image.
.

Scream Factory has decided to present the film in it’s original 2.0 Mono format instead of using the 5.1 DTS-HD MA track that the Lionsgate version supplied. While that may seem like a downgrade it really isn’t. The 5.1 track from the earlier release was REALLY sub par, and couldn’t overcome it’s very meager and low budget roots. It was basically a 2.0 track in a 5.1 shell, as the mix was very VERY front heavy, and rather thin. The 2.0 Mono track on this edition is largely the same, giving a rather humble, but accurate presentation of the audio. The dialog is a bit detached form the actors, and you can see some of the ADR dubbing be off slightly if you listen. Voices are still crisp and mostly clean, and the sound effects for the mine actually have some solid presence. The low, shoe-string, budget really doesn’t give us a lot to work with, but the mix is more than amenable and is about as good as the 39 year old film is really going to sound. 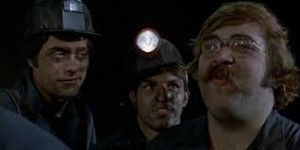 My Bloody Valentine actually holds up well for being a largely niche horror movie compared to others of it’s generation. The film lacks some cohesion and acting quality, but the cast makes up for it with exuberance and some rather creative kills for a slasher film. My only real complaint with the movie is that it sort of telegraphs the kills coming from a mile away and the audience automatically knows what they’re in for during that scene. Still, it’s a fun movie that is inventive for the time and is gleefully and guiltily fun for sure. Scream Factory’s new release is chock full of new extras as well as legacy ones, and the new 4K scans for the rated and unrated editions are a welcomed addition. Recommended for any gore hound.

Thanks for the review. As a fan of Friday the 13th as well as other similar slasher films, will check this out. I don't remember seeing this when it came out so will take a look now.

Thanks for the review. I preordered the movie from SF over two months ago for the February release and got it last week. Mine has two slipcovers and came with two posters.
I plan on watching it this Friday on Valentine's day. I loved watching this movie growing up.

I owned the 2009 remake, I will have too see if it’s still on the shelf....I think i sold it when I purged my 3D collection.
There are only like two or three horror cult movies I have ever added to my collection, the remake was one of them.
You must log in or register to reply here.
Share:
Facebook Twitter Reddit Pinterest Tumblr WhatsApp Email Share Link