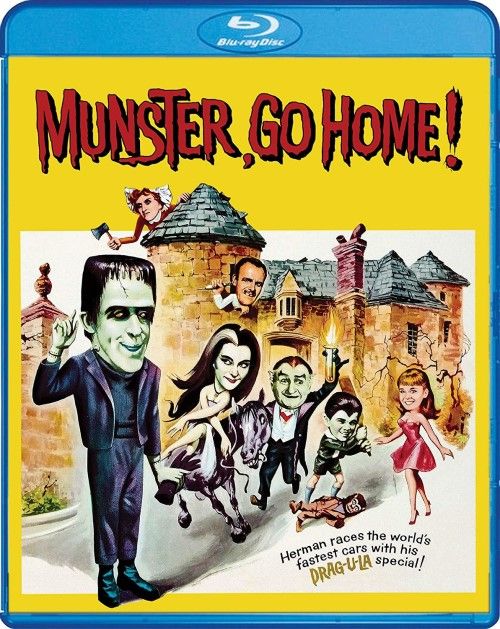 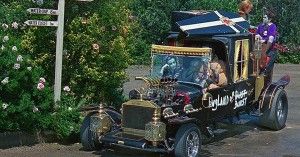 Movie
The Munsters lasted a fantastic 70 episodes on television and in 1966 the show was just winding down its run. Lasting two full years it had milked that sort of silly Addams Family meets the classic universal monsters, and pop culture was starting to shift off in another direction. Just before the show was sent off to syndication Universal decided to pop out a feature film for the series in hopes that there might be some spin offs of the Munster name, and hopefully might even see a resurgence on television. While Munster Go Home did decent at the box office, it wasn’t enough to revive the series, and is counted as a nostalgic sendoff to the classic characters from TV.

Scream Factory has gone back and pulled not only Munster, Go Home!, but also the 1981 film that tried to bring everyone back together once more as an extra on the disc (1.33:1 framed for TV). As such, this set is the perfect accompaniment for those who have the TV series, as it finally makes it complete (and we’re not going to included those horrible 1990s films with recast actors that bombed as they rightfully should).

The lovable family from 1313 Mockingbird Lane are off for one last adventure before being retired from TV. After learning of a distant relative in England who has just died and left them a lordship, the Munsters decide to pack up their bags and head over to jolly old England to see what they have acquired. Herman (Fred Gwynne), wife Lily (Yvonne De Carlo), Grandpa (Al Lewis) and son Eddie (Butch Patrick) along with “normal” cousin Marilyn (Debbie Watson instead of series star Pat Priest) get to England only to find out their not exactly wanted. Cousins Freddie (Terry Thomas) and Grace (Jeanne Arnold) are resentful of their father leaving the estate to the simple American Munsters, and are willing to do what it take to get rid of their foreign cousins. 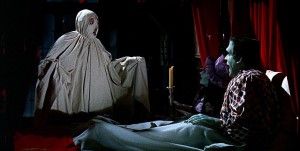 Scaring the family does them no good, as the simple Munster family gleefully take in the frights as entertainment, and every attempt to dissuade the Americans only flies right over their simple heads. Now it’s up to a mysterious benefactor known as “The Griffon” to come in and get rid of the Munsters before Herman and his family decide to take up permanent residence.

The movie really tried hard to get the Munster family out of California and into new waters, and this was just the ticket. The movie is almost like an extended episode of the TV series in a way, as it’s so close on the heels of the show finishing that everyone involved hasn’t had time to wind down and get out of the “groove” of the show. It’s lighthearted fun at 1960s finest, and just that. Simple, lighthearted, and fun. The 1981 TV film Munsters Revenge is a bit weaker, and while it definitely tried to recapture the magic, 15 years had gone by and the general populace had forgotten about The Munsters by then, outside of syndication. The movie just didn’t really catch much outside of long time fans, and as such was the last time Universal would try to bring back the old cast and reinvigorate the series once more. 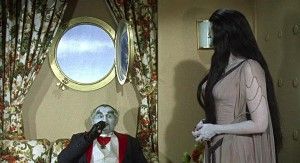 It doesn’t look like Universal has given Scream Factory a new scan of the film at all, but rather given us a slightly aging one. The image is certainly striking enough, with a strong color scheme and good saturation levels. Details are generally good, but the 1.85:1 AVC transfer is plagued with some very chunky grain that looks very unnatural. Almost like macroblocking but not really, the chunky grains gets in the way of many of the details, and while there are plenty of visually striking scenes, the mildly soft look and chunky grain keep this from being a GREAT looking transfer. 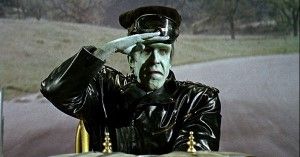 Munster, Go Home! Features a very straight forward and basic 2.0 Mono sound track, and does everything really rather well. The track can get a bit raucous during some of the adventures, and holds even in the front two speakers. Dialog is clean and clear, and there’s only some VERY minor hisses that I heard in the background. It’s a basic track, but a very well done one that is clean and clear. About all you can ask for in a 2.0 Monorail mix. 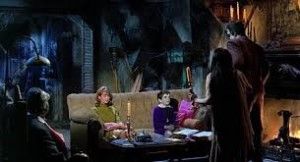 ​
The Munsters has always been a light and airy version of The Addam Family, and it’s fun to watch the characters interact on screen together. Growing up watching the TV show as a treat, and Scream Factory being able to rescue not only Munster, Go Home!, but also the made for TV film Munsters Revenge is just awesome. The cast is really the appeal of the film, and I still enjoy Gwynne hamming it up as Eddie Munster to this day. The Blu-ray looks and sounds good, and the extras are impressive. Definitely worth checking out if you’re a fan of classic Munsters material. Recommended.

Thanks for the review. I loved the tv series and didn't know about this movie. Will check it out.