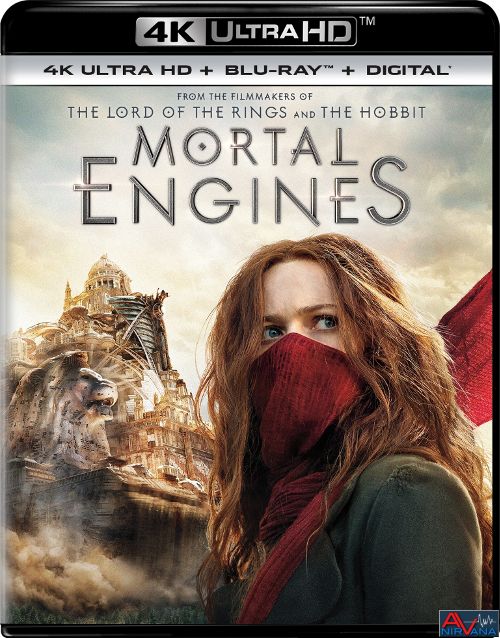 Movie
The young adult genre is pretty easy to spot these days. They’ve littered the landscape of film with all sorts of projects ranging from the really bad (Mortal Instruments: City of Bones) to the really good (The Hunger Games) as well as all sorts of middle of the road fare to enjoy (Divergent). The big claim to fame for the steam punk film Mortal Engines wasn’t really it’s subject matter, but WHO was behind it. The marketing push behind the film was all about putting it in your face that this was the next big thing by Peter Jackson. A movie that naturally garnered a lot of support by fans of the Phillip Reeves novels, as well as piqued the interest of the critics everyone after this slam dunk success with The Lord of the Rings trilogy. So you can imagine their shock and disappointment when Mortal Engines ended up being a middle of the road young adult film instead of an epic movie, leading to the absolutely HORRENDOUS ratings the film got during the theatrical run. The truth of the matter is, that Mortal Engines doesn’t deserved the scathing hatred that many turned on it in their disappointment and rage after the initial shock wore off. It’s nothing great, but it IS a rather entertaining young adult film that suffers from some of the flaws inherent to the genre, but one that has a few neat twists in it’s style and execution that makes it solid popcorn fare for those of you who aren’t expecting another cult classic.

A thousand years in the future, mankind has been brought to our knees. After the “60 Minute War” hundreds of years ago, mankind has had to rebuild after we nearly extincted ourselves with next level “nukes” (or at least the doomsday equivalent somewhere in our future) and left the earth in pieces. However, humanity has survived by using old world technology to create giant moving cities that get by on scavenging for resources, with the larger cities preying upon the weaker ones. The largest of these cities is London, who preys upon the smaller cities in warlike fashion, absorbing all of their resources to fuel their dwindling population. However, Thaddeus Valentine (Hugo Weaving), head of the History Guild is tired of living off of the scraps. Instead of living on a dying earth and looking the future, he is looking at the past. In particular the weapons that the “ancients” used to nearly annihilate themselves with. He’s convinced that with access to the massive quantum energy weapons that they had, he can rule the new world and bring order to chaos.

However, his plan is slightly altered when they take in a small mining town named Salzhaken in the film’s opening act. You see, Salzhaken is housing one Hester Shaw (Hera Hilmer) who has lived her entire adult life seeking Valentine down for murdering her mother. With Valentine on the rampage and NO ONE standing in his way, Shaw and historian Tom Natsworthy (Sheehan) have to be the ones to stand in the gap and keep the maniacal historian from recreating the same swath of death and destruction that the old ones did hundreds upon hundreds of years ago. With the aid of rebel Anna Fang (Jihae), they set out to kill valentine and stop the deploying of the Medusa quantum super weapon before the city of London wipes out all those who stand in its way.

Mortal Engines doesn’t really bring anything new to the young adult genre besides the repopularization of steam punk visuals. The idea cities powered by coal and steam that can move about on wheels is pretty nifty on screen. Not to mention that the budge was POURED into the CGI in massive quantities, leaving us with a stunning visual treat no matter if you enjoy the actual film or not. However beyond that it’s a fairly run of the mil post apocalyptic young adult film. The main problems stem from the most typical of all faults in the young adult genre. That of having so much rich backstory from the books and only 2 hours to tell it in. We get inundated with SOOOO much information and contextual backdrops that you can only briefly flit over those items for a few scant moments and go on to the next one. The stalkers and the Lazarus brigade are briefly touched upon, but then left alone for most of the film, as is the detail into the resistance and backstory between Valentine and Shaw’s mother. As a result the film feels overly bloated with NEEDED information and ends up being a cliffs notes of the actual backstory.

On the flip side of the coin, director Christian Rivers manages to pull out a visually entertaining film that takes a steam punk approach to classic fantasy/sci-fi, borrowing elements from Star Wars, Star Trek, classic steam punk lore and mashing it all together into an entertaining popcorn film that really just asks you to leave your brain at the door. The traditional lone hero steps up to save the world from almost obliterating itself again, and does so with a huge CGI as we have martial arts battles, air battles, and loads and loads of steam punk visuals to oooo and awwww over.

Rated PG-13 for sequences of futuristic violence and action

Usually with 4K UHD releases I’m expecting a moderate-impressive increase in visual clarity, which is saying something considering the Blu-ray release of Mortal Engines is about as perfect as you can get. However, the 4K UHD release shows some rather startling increases in clarity and quality that actually took me back a bit. It’s been a while since I’ve seen this big of a jump, especially coming from a Blu-ray that I consider just about perfect as it is. The sharpness and crispness to the picture is noticeably better than the Blu-ray, boasting some incredible increases in facial details as well as the intricate nuances found on the steam punkesque mobile cities. The CGI for things like Shrike are amazingly realistic and while you can see some CGI meets real world scenarios, the blending of the digital world with the real world is not that shockingly different. The colors are rich and vivid, ranging from the bright red of Fang’s ship, to the evil orange glow of the London incinerator, to earthy tones down on the surface. It’s so rich, so vibrant, so lusciously colored with the HDR that I really was taken aback when A/Bing the two discs. The 4K disc just stands out as so much sharper, so much more colorful and so much CLEARER that I have to give this one of my best scored 4K discs that I’ve seen to date. The film seems to have been shot on 8K sourced RED digital cameras and given a 4K master for this home video release, and that higher end mastering really shows with the disc.

The Dolby Atmos track found on both the Blu-ray and the 4K UHD disc is a stunner for sure, giving us a MASSIVE sound stage that fully takes advantage of the steam punk world to draw the listener in. The listening position is awash with all sorts of activity, with overheads and surrounds active near 100% of the time as the rolling cities rumble, gnash their “teeth” and flex all around you. The swoosh of Fang’s light ship moves from one side of the sound stage to the next, and the constant explosions rock the listener back in their seats with deep weaves of punishing bass. With all of the crazy activity one would expect a loss in vocal clarity, or having issues with imbalanced dynamic range, but the track’s front end maintains a healthy clarity and a strong symbiosis with the wildness of the surrounds and low end activity. It’s another perfect audio mix from Universal, and one that really thrives on directionality thanks to the whole steam punk world of machinery blasting from all directions.

​
As I said above, Mortal Engines doesn’t deserve the abysmal reviews that the film got during its theatrical run. My opinion is that too many expectations were let down considering this was marketed as Peter Jackson’s next big thing, and people were hoping for something epic to unfold. Instead it’s a rather middle of the road young adult novel that is more than entertaining enough for a movie night. The visuals are top notch, the action fun, but also mired down with some of the tropes and pitfalls that the young adult genre is kind of known for. Universal did a stunning job with the technical aspects of the film, giving us a perfect pair of scores for the audio/video and a moderate array of extras to choose from. All in all, It’s a fun escapist piece of entertainment that is really nothing more than the sum of its parts. Recommended for a fun watch.

Thanks for the review. I will check it out once it is on amazon prime/netflix.

I don't think I've flipped back and forth more often on a film, between buy/rent, than this one.

Thank you Michael, I have been wanting this for awhile but forgot about the movie. This is a buy for me.

Well I bought it and I agree completely on all accounts. Not a great movie, but I’ve watched much worse. To me the biggest problem was predictability.

But oh my goodness the visuals, and the soundtrack. This disc was stunning.

Oh yeah. It was eye and ear candy for sure

Thanks for the review. I will rent this one.

My copy came today and as Michael said, this is quite the mixed bag. Wonderful story, imagination for miles, a visual/aural presentation that made my body feel like it was doing the hippy hippy shake without my permission. I agree the problem lies with the compression needed to make this much information into a 2 hour movie. I am reminded of Ready Player One.
I did enjoy this and time went on fairly quickly in the second half of the film but did drag a bit early on. But oh those visuals, they almost gave me goose bumps.
You must log in or register to reply here.
Share:
Facebook Twitter Reddit Pinterest Tumblr WhatsApp Email Share Link