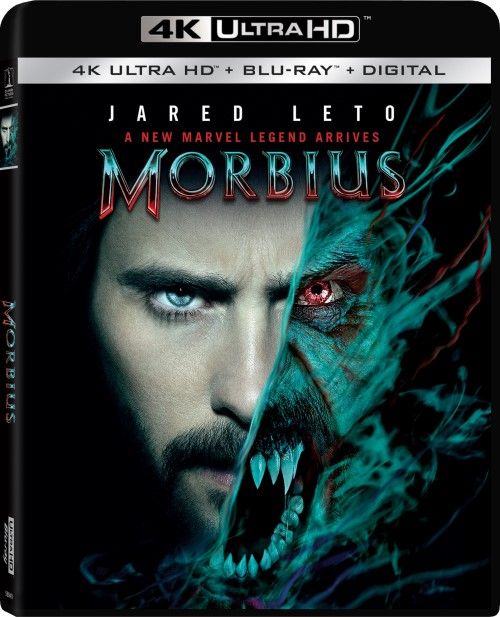 Ahhh, Morbius, the 2022 super hero film that I wanted to love, depressingly hated, yet ended up liking it through all of the abject hatred. I really feel sorry for Jared Leto. The man is a talented actor, but every time he tries to make a go of things as a main character, or as a lead in a super hero film, his movies just BOMB. I originally was VERY excited for Morbius. Michael Morbius the living vampire is one of my favorite anti-heroes, as I grew up reading Spiderman comics and still have the issue where Morbius was introduced to the Marvel Universe. He’s a fantastically brutal anti-hero, and while he’s not as popular as Venom, made a successful run as an antagonist for both Blade and Spiderman alike. Not only that, the movie’s initial trailer a year or so ago intrigued me as I was getting bored with how cookie cutter the Marvel produced films were getting. It looked dark, spicy, and I had high hopes for it.

Lo and behold the first cracks in the armor of my hope was when I noticed that the writers were the same pair who wrote Gods of Egypt, The Last Witch Hunter, Power Rangers, and Dracula Untold. Lets just say that their writing history is not exactly something that inspires confidence. Then came the theatrical run a few months back where the movie just got CREAMED critically. Then the impossible happened. Morbius became a meme on the internet, and Sony believed that the “cult” meme following was enough incentive for them to re-release the film back into theaters. Only for it to make a hilarious $85,000 on the re-release. So yes, Morbius is more akin to Venom: Let their be Carnage than Spiderman: No Way Home.

The one thing that really frustrates me is that the pacing is all over the place, with most of the hinted at story line from the trailer being rammed down our throats in the opening 30 minutes. We’re introduced to Dr. Michael Morbius (Jared Leto), a man with a rare blood disease that keeps him weak and frail. However, he has been searching his whole life for a cure, and believes he has the answer in the DNA of vampire bats. Capturing a whole bunch from Costa Rica, the good Doctor slowly incorporates the bat DNA into a serum, and finally has the breakthrough he needs. Due to the ethics and legality of the situation Morbius has to use himself as a test subject and with the help of his partner, Dr. Martine Bancroft (Adria Arjona), injects himself with the serum.

You don’t even have to guess what happens next. Morbius acquires strength and stability due to the bat serum, but a huge price. Not only does he gain speed, strength, and a myriad of vampire bat like abilities, but it is all contingent on the need to feed on human blood like the mythical vampires. As such he is a sort of “living vampire”. Trying to satiate himself on his own invention of synthetic blood that he devised years ago, Morbius works at trying to reverse his curse. But a hiccup arrives in the form of his best friend Milo (Matt Smith, who is so heavily telegraphed as the eventual villain from the first few moments of the movie), who suffers from the same blood condition and DESPERATELY wants the same cure from death that Michael has given himself.

Morbius is a giant cluster bomb of horrible pacing, CGI that looks like it came from the early 2000s, and a storyline that literally side lines Jared Harris and Tyrese Gibson (who plays the obligatory cop). It’s silly, goofy, and while it tries to use Spiderman: No Way Home as a way to tie itself into the Marvel regular Universe, I just don’t see a sequel happening. Not after it bombing so badly at the box office. However, I guiltily admit that I actually kind of like the film. It’s better than Venom: Let Their Be Carnage for sure, and the internet memes that BLEW UP afterwards has solidified the film in a sort of weird cult “so awful that it’s awfully entertaining” status. It’s hammy, cheesy, but ultimately not the train wreck that it was critically lambasted for being in the theaters. It’s just not top tier super hero stuff.

Morbius was shot using digital cameras at 6.5K and finished at a native 4K transfer for the 4K UHD and Blu-ray discs. It does have some low budget CGI that does hamper clarity at times, this is otherwise a top notch Sony transfer. Resplendent with the ever popular teal color tinge, it maintains razor sharp clarity throughout the movie (CGI issues outside of that) and only one or two moments where I noticed some noise spikes (such as the 2nd chapter when you’re looking at the towers). The black levels are HEAVILY enhanced with the HDR10 and DV color grading, and while primary colors like the orange jump suit get some color saturation boosts, it’s really the black levels that really shine here. Much of the film is shot in low lighting environments, and despite said low lighting, you can see everything perfectly. Shadows are deep and inky, and no signs of crush anywhere to be seen. Simply put, Morbius looks amazing in 4K UHD, and just as stunning in the accompanying Blu-ray disc as well.

As they are prone to do, the 4K UHD disc gets the upgraded Atmos track over the Blu-ray’s 5.1 DTS-HD MA mix. Luckily the 5.1 mix is stellar, and the Atmos track is just an enhancement of that mix. That being said, the constant shifts in position as Morbius flys around the city really make use of the overhead channels as well as directional shifting. The final battle between Milo and Morbius is AMAZING, with the entire room literally shifting and moving around the listening position. Bass is deep and powerful, with lots of superhero “booms” and crashes as Morbius and Milo tear up the town. Dialog is crisp and clean as always, and this is just simply a top notch audio mix on par with Ambulance.

While I would have loved a top tier super hero movie, Morbius is more akin to your typical Sony super hero movie fare (Spiderman not withstanding). It’s goofy, shot on a super low budget (the CGI is evidence of that) and Jared Leto doesn’t deserve the heat he got for his Morbius portrayal (although Matt Smith is so gloriously hammy that it’s awe inspiring). The 4K UHD disc is absolutely fantastic on a technical standpoint though (Sony is on point as usual) and while this isn’t exactly high brow art, it was a fun hammy watch.

I actually ended up enjoying this much more than I thought it would (I rated it 3 stars out of 5). While not a great movie by any stretch, it's not horrible either.

Epoxy1 said:
I actually ended up enjoying this much more than I thought it would (I rated it 3 stars out of 5). While not a great movie by any stretch, it's not horrible either.
Click to expand...

yeah, it was by no means a true train wreck. it just had some very obvious writing issues (coming from the guys who made Gods of Egypt + The Last Witch Hunter it's not shocking). I honestly was entertainined on a "check your brain at the door level.
Last edited: Jun 21, 2022
You must log in or register to reply here.
Share:
Facebook Twitter Reddit Pinterest Tumblr WhatsApp Email Link