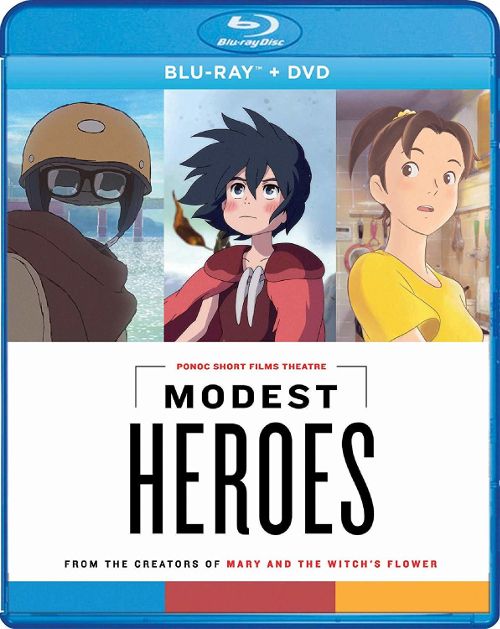 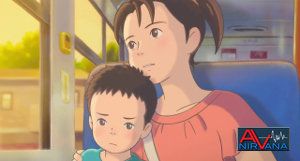 Movie
I was actually really excited to receive and review Modest Heroes. Short film making in Japanese animation is really not a big thing for their culture. Most animated sources are either TV shows (traditional Anime) or full blow movies ala Studio Ghibli. Short films are very rare and not very encouraged, as they really aren’t wildly encouraged over here in the states as well. The few short films that exist are mostly the Studio Ghibli short films, and those only are allowed to be played at the Studio Ghibli museum, and aren’t distributed anywhere else, meaning that it’s VERY hard to get a hold of, and there are about a dozen short Ghibli films that I’d LOVE to see, but we have no access to in our homes (The Studio Ghibli Museum is a bit out of my way). According to the special features and an interview with the cast and crew, Studio Ponoc (who are basically Studio Ghibli 2.0 in many ways) was exhausted after doing Mary and the Witches Flower and wanted to do something else, but they were drained from being a tiny start up studio and weren’t up to doing a full feature film. Thus they decided to go ahead and craft a bunch of short films and create an anthology collection (this is labeled only as “Volume One” so it looks like we may get several more of these anthology short film sets if this makes enough money).

The shorts are farmed out to several big name directors, with the director of When Marnie Was There helming the first one, called “Kanini to Kanino”. This is a little short about a family of river dwelling river folk who are forced to have a little adventure while the mother goes off to give birth. The father is inadvertently swept away with a stormy current trying to rescue Kanini and both Kanini and Kanino have to go rescue their father, which includes a harrowing experience with a hungry fish. This short was probably the weakest of the three story wise. Visually it was absolutely stunning, but the story was the least impactful. It was sweet, charming and simply whimsical, but I just didn’t feel any emotional impact out of it outside of simple enjoyment (which is not a knock on the film. It was actually pretty fun).

The second short was called “Life Ain’t Gonna Lose” which revolves around a young mother and her child’s life threatening egg allergy and all of the fear and close calls that stems from having to literally revolve your life around figuring out what has egg in it and what doesn’t. It’s awesome to watch the child Shun struggle and fight against his condition, refusing to let his “handicap” keep him from enjoying life to the fullest. This was my second favorite short of the 3 films, and I absolutely ADORED the animation. It had that watercolored and slightly smeared look to it like Princess Kaguya and story itself was really heartwarming. My wife was sitting next to me snuffling on the couch when we finished it up and I have to say that it was an exceptional film. 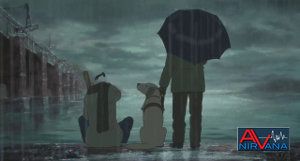 This brings us to the final, and best, short film of the anthology. A little 15 minute short called “Invisible”. Now this is probably the most ambiguous, but the most powerful and enthralling short in the series. This one revolves around an unknown man. This man gets ready for work, goes to work, goes about his boring day, but is completely invisible. And I mean that literally, he’s completely invisible. The audience can see his clothes, see his hat, see his glasses, but behind them there is nothing there. He goes about his day in depressed silence as no one recognizes that he’s even there, with the only person who can actually “see” him is a blind man he encounters. It’s one of those stories that can be taken as a more allegorical story rather than straight forward literal, and can be taken in many different directions. I personally took it as a person who is isolated and lonely, cut off from the rest of the world. He carries a fire extinguisher on his back to keep himself weighted down, and if that leaves his body, he floats away. Basically something to keep him “grounded” to reality in a sense. My wife, on the other hand, took him and the blind man to symbolize a physical disability, and his invisibility being the side effect of a culture so obsessed with perfection that they become invisible to those around him (his fire extinguisher symbolizing some form of disability, while the blind man’s cane symbolizing his). It’s a great little short and easily my favorite as it allows the viewer to figure out their own interpretation of what makes him invisible and WHY. It’s lovingly animated and a great little story that had me smiling from ear to ear.

The only “downside” to the anthology is simply that it IS short. There are only 3 short films on the disc and they only make up 54 minutes WITH credits between each short. Sadly there was supposed to be a 4th short for the film done by the legendary Isao Takahata, but he sadly passed away last year and we were left with only 3. Otherwise it’s a great little anthology and well worth checking out if you’re a fan of classic, hand drawn, animation like Studio Ghibli used to be known for.

Rated PG for some thematic elements and peril 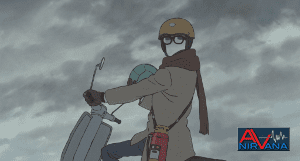 As expected from Studio Ponoc and Shout Factory, this is an AMAZING visual treat on Blu-ray. The 1.85:1 framed Blu-ray looks stunning in each of the three short films. “Kanino to Kanini” is the most “classic” looking of the three, with bright primary colors and a massively detailed hand drawn backdrop for the river folk. The water itself was INCREDIBLE and several times had me wondering if they actually cut in REAL water over the animated background (for all I know they did, as it was jaw dropping at times). “Life Ain’t Gonna Lose” was more of a surreal watercolor, but was warm and inviting, with strong yellows and blues as it’s primary colors. Details were a little bit less simply due to he animation style and blurring used (a technique, not a flaw), while “Invisible” was the most textured and surreal of the three. It’s a grim and gray looking image (meant to blend with the grim and depressing feeling of the main character), but it has splashes of color here and there, although in a more muted setting. All in all, this is only a 54 minute film, so the disc seems to be artifact free as it has plenty of room to breathe and looks amazing all around. 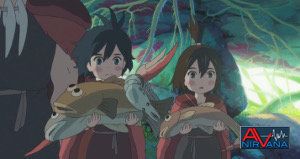 Like usual, Shout Factory offers a 5.1 DTS-HD MA track in both the original Japanese and English, and I naturally liked the Japanese track better. Both mixes are perfectly fine, I just prefer the voice acting for the Japanese track a little bit better. Just warning you as it caught me by surprise. “Kanini to Kanino” doesn’t have subtitles because the language they are speaking isn’t meant to be heard. Meaning they’re speaking, but there is no Japanese or English translation, and is meant to be viewed as a “mime” story so to speak. However, the vocals for all three tracks are clean and clear, and the surround usage is amazing. You can hear the whipping win as the invisible man gets lifted in the air in “Invisible”, as well as the rushing current coming from all sides in “Kanini to Kanino”. LFE is punchy and strong, but usually is more of an addition with the score more than anything.

Modest Heroes is fun little anthology that really is something I’m enthusiastic about supporting. Animated anthologies is not a big thing in Japan and actually seeing someone go out and not only making, but distributing to home video, these releases is extremely refreshing. The series starts out with a good little story and only gets better from there, with it’s only main limitation being that it’s so (don’t laugh at the pun) “short”. The audio and video are stunning as expected from Studio Ponoc, and they have some really in depth extras to dig into as well. Recommended as a good buy.

Thanks for this review and the historical perspective in the beginning. I saw a little of 'Mary and the Witches Flower' on Netflix a while ago and I kept thinking it was a Studio Ghibli film when it actually wasn't : )

Grayson Dere said:
Thanks for this review and the historical perspective in the beginning. I saw a little of 'Mary and the Witches Flower' on Netflix a while ago and I kept thinking it was a Studio Ghibli film when it actually wasn't : )
Click to expand...

many of the Studio Ponoc employees and creators are actually from Studio Ghibli. It's kind of Studio Ghibli 2.0 after Miyazaki left his creation a few years back and retired