MMM mouving measurements method, which one is best with REW?

Hi,
I saw this video:


And I was surprised how fast they seem to move the mic.

I am only an amateur here, but I followed the following method instead:


Hold the mic at the main listening position at ear height with the tip pointing either up or down. Click "Reset averaging" and start moving the mic slowly through the listening area at a speed not faster than about 10cm (4 inches) per second. Try to cover as many different points as possible within the listening area. The area should cover a volume of about 60cm (2ft) or wider around the main listening position to avoid over-optimization by EQ later on. After about 60 averages click save. 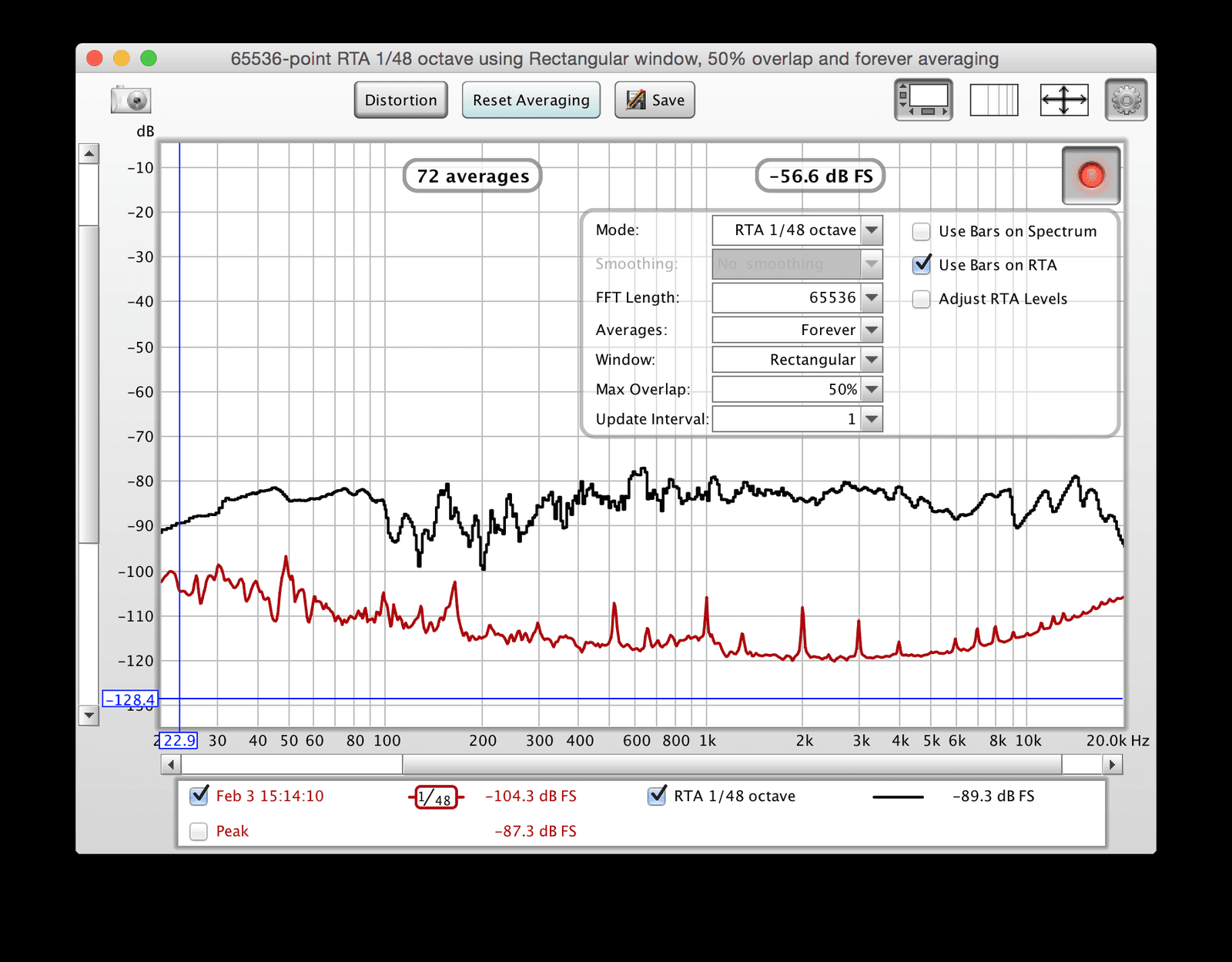 Which one is the best if any? Or do you have others methods about how to do that. Or is there a common "best practice"?
I compared "my" method with a 9 positions measurements I did with Rew for my 6 channels. If there were differences in the average 9 measures for one speaker or an other, it was trivial, IMHO.
Last edited: Feb 3, 2020

Have to watch that video.
What are the red and black traces?
The webpage you linked is a member here. @markus

I have extensive MMM experience in the 9 years that I have been using this method for manual EQ. I experimented with many different techniques of taking the measurements for EQ purposes and settled on using MMM for all the reasons suggested in the video. I have taken roughly a thousand MMM measurements including early experimentation and with ongoing EQ trials.

Notes on my experience:

> I also use ‘forever’ averaging. I see no reason to weight the later measurements.​
> The other REW settings you posted above are basically the ones I use. I do use maximum overlap (93.75%) and update interval of 4, but expect they are not significant differences. My thinking was that the higher overlap may help if a faster mic motion was used. I never tested to confirm that idea as I found no problems with that setting.​
> In my 2 rooms (~10 ft LP distance), I found no significant difference using a measurement window volume of maybe 2-4 cu ft vs maybe 5-8 cu ft. I thus settled on the smaller window. The video looked fine to me as shown for that situation. I do emphasize the horizontal and verticle directions. My window depth is maybe 1 ft. and does not really impact the results in my situation. I reduce the measurement window size when I use a closer LP position or when average a main speaker SPL over a 30° window at 1 m.​
> I find no difference moving the mic slow or at a more natural speed. I sometimes am in a hurry and move faster than I intended but have never seen it make a difference. The video mic speed looked natural to me.​
> I traditionally placed the mic on a stand in the LP area. The REW measurement was started on the PC 10 ft. further away. It's then necessary to move to the mic and remove it from the stand to start the motion. After the motion the mic was replaced on the stand and I returned to the PC to stop the measurement. This took enough time to collect about 160-180 averages, maybe a little less time than shown in the video. It is not really necessary to use that much time however.​
Note that, on some days an small unnoticeable static discharge occurs when first touching the XLR mic. That results in an artificial boost to the bass range <100 Hz.] More recently in my new room I just hold the mic in my hand at the PC located 3 ft. behind and to the side of the measurement window. That way I can start the measurement avoiding any static discharge issues. I move to the measuring window and start the motion and then return to the PC to stop the process with the mic still in hand. The results are not impacted as the low-level SPL measurements taken behind the LP have a trivial impact on the overall average of the relatively large number of measurements within the LP window that are at a significantly higher SPL level.​
> With MMM the resulting SPL response will rolloff at high frequency due to the mic displacement. It will drop starting around 2 kHz and fall maybe 3-4 dB at 20 kHz in my case. It will be very dependent on mic distance and window size. The only impact is that if you have previously adjusted to a house curve based on LP measurements you may be inclined to add a little extra high end EQ shaping to reach that target. That is not needed as the sound has not changed. Just adjust the target house curve as needed to suit the new measuring method.​
> I point the mic generally in the direction of the speaker being measured and use the appropriate compensation curve. Mic direction doesn’t matter when EQ is limited to <200 Hz as stated in the video.​
Every room setup is different so what works for me may not apply to other situations. My advice is do some experimentation with this method to first confirm it is repeatable and not sensitive to the exact method used to take the measurement. If there is significant variability there is something wrong.

Experts emphasize that EQ should not be used above about 200 Hz based on the published technical studies. EQ to address speaker direct sound flatness is also appropriate. My DIY mains require some significant baffle step compensation to flatten the direct sound and I also prefer addressing some other minor room influences in the 200-600 Hz range. Adjustment to a preferred house curve rolloff above 600 Hz is also needed in my experience.

Below are some old charts showing the repeatability of MMM:

7 sweeps in the listening area 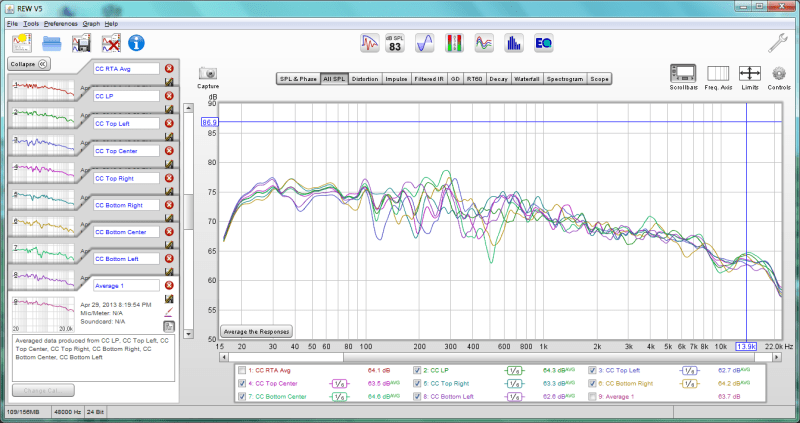 6 MMM measurements in the same area: 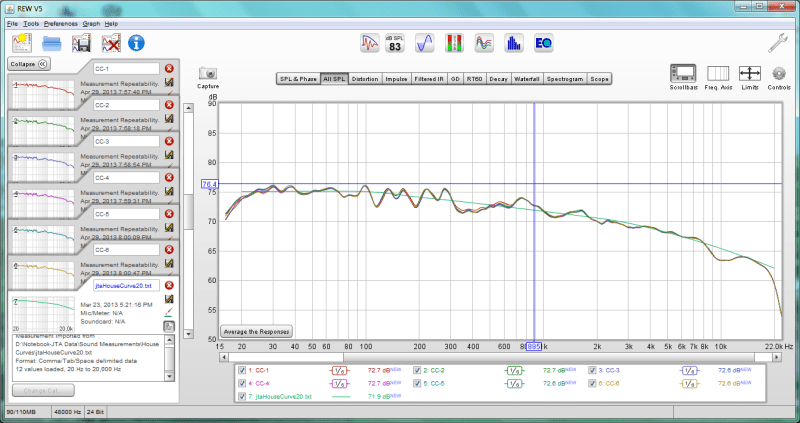 After looking at all the alternatives and having very poor results with single-position measurement sweeps in general, I discovered that paper on MMM and tried it out. It took a while to learn to conduct the test consistently so that I got repeatable measurements, but once I got there, I was really happy with the result. I even tried taking single measurements with the RTA at several positions within the "space" of the MMM pattern, averaged them together and got a graph which was in excellent agreement with the single moving measurement. Most importantly, it gives a result which seems to match what I hear at the listening position which is centered on the MMM traverse. That's a win.

I too start by holding the mic and manually reset averaging, using no weighting, and move the mic at a comfortable speed. I haven't seen the speed of motion make a significant difference. I feel that as long as the MMM volume covers the locations of significant frequency deviations due to room effects and speaker interaction close to the listening position, the exact volume isn't critical. Every so often I re-run the test with some variations on the traverse pattern, just to see if I get a surprise. So far, no - it just seems to work every time and gives me a good indication of how the system response "sounds" to me.
F

I must to say that since I use the MMM I will never come back to 1 measurement only when I want to PEQ. My receiver has a set of 10 filters possible. Since I use the MMM average it is very easy to find filters to do the job and to avoid overkilling the corrections. It sounds good with much less filters.
N

When measuring for EQ purpose should I run L or R or L+R from REW Tone generator?
F

Niklasmagnus said:
When measuring for EQ purpose should I run L or R or L+R from REW Tone generator?
Click to expand...

one channel at a time IMHO
N

FargateOne said:
one channel at a time IMHO
Click to expand...

Evan if its for sub only?
Should I take measurements in all seats first for L and then for R speaker. And create average for input to EQ or how to best to this?
G

I have done L+R measurements, as well as L. R, sub, and averaging them because I was curious about this. In fact, I did single speaker measurements at each extreme of positioning around the LP before averaging them all. The differences, in my room and system are not significant. In fact, I wonder whether there are dynamic interactions (phase, positioning, etc.) between speakers which show up better when measuring both channels simultaneously. My speakers are extremely wide and tall, so they're probably more subject to weird FR behavior at the LP with both of them being driven.

It's probably worth doing a test to see if it matters on your system, but on mine it doesn't seem to be worth the extra effort. I can EQ my system based on a single 30-second MMM run at the LP with both channels active and get a very good result which agrees with what I think I hear. What's nice is that we can experiment with different techniques rather simply and see what happens, rather than take someone else's word for it.
You must log in or register to reply here.
Share:
Facebook Twitter Reddit Pinterest Tumblr WhatsApp Email Link