Mermaid: Lake of the Dead

Mermaid: Lake of the Dead 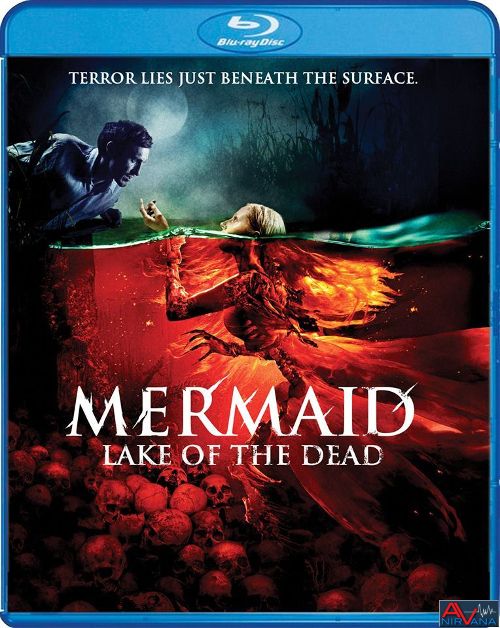 Movie
Most people’s images of Mermaids are those of Disney and cute women on top with fish halves as bottoms. Even the darker tales we have of mermaids usually has them as sultry seductresses who lure sailors to their dooms, but even then it’s considered a “well, I wouldn’t mind dying like that!” scenario rather than a truly evil monster that sucks the love and energy from a human being for fuel. I honestly didn’t know ANYTHING about Mermaid: Lake of the Dead before watching it, much less that it was a Russian film. My brain looked at the cover and said “sure, why not, I haven’t reviewed a day and date horror film from Scream Factory in a while”. My first instinct was that it was going to be your average low budget IFC productions film, but I was a little surprised to notice the Russian language track, which made me check my expectations at the door and look at the film with a little more interest.

I feel like I’m going to be going against the grain of a lot of other reviewers out there, but I rather like Mermaids: Lake of the Dead. It’s not a wildly GREAT horror film, but it is leagues better than any other Russian film I’ve seen (they’re kind of low on the totem pole for quality film makers) and the use of Russian lore and their unique view on mermaids made for an intriguing and different watch. The film starts out with a young woman losing her life to a mysterious creature in the nearby lake. The husband sits powerlessly off to the side as his bride is dragged into the deep, as he seems to be under some sort of trance. Fast forward to modern times and we’re introduced to ANOTHER young couple about to get married. Roma Kitaev (Efim Petrunin) is a swimmer by nature, and is getting ready for championships, while his pretty fiance Marina (Viktoriya Agalakova) is worrying about their future. Luckily for the pair of them, Roma’s estranged father has given them a lakeside cottage (hint hint) with instructions to sell, and the duo believe that they can fix it up and live in it.

During a bit of a bachelor party getaway, Roma walks down to the lakeside only to be confronted with a beautiful girl who completely bewitches the young man. After returning home Roma realizes something is wrong. He’s getting sick and has flashbacks to the woman in the lake. Bit by bit he’s inexorably drawn to that lake house once more and there seems to be nothing that can get in his way. Desperate to figure out what’s wrong, Marina accompanies Roma back to the house in an effort to rescue him from the clutches of the water dwelling beast.

Mermaids: Lake of the Dead is an interesting twist on Mermaids, blending in your regular old ghost movie, blended with hints of Russian folklore, and the classic water dwelling seductress looking to entrap those who fall under her gaze. The first 1/3rd of the movie is actually a bit boring, as the setup is slow paced. It’s not until Roma meets the girl at the lake for the first time that things start picking up and I started paying more and more attention. Underneath the surface there really is not a whole lot of horror ingenuity, especially with the ghost story, but I really started to enjoy the very different feel that Russian movie had. I’m usually not a fan of Russian film making, but this one was so visually and texturally different that I actually had a lot of fun with it. The uniqueness of the mermaid’s powers and weaknesses made for a fascinating twist, and the whole fixation on love made it heartbreaking and rather sickening if you sit down and think about it.

The ending is a bit anti-climactic, but I have to admit that I really liked the traditional ENDING to a film, instead of using the cliched “oh my goodness!” twist at the very end just before the credits roll. That may have been unique and scary back in the 80s, but nowadays it’s almost as over used as the Wilhelm scream in films. Roma and Marina are believable enough for a horror movie, but while it’s unique and interesting in many ways, the horror tropes that it utilizes are actually rather basic upon further inspection. As such it’s not a GREAT horror film, but a rather fun one that uses cultural quirks to make it intriguing.

The digitally filmed picture is solid for most of it’s runtime, with some really strong color grading that shifts depending on location. Outside in the dark, and at the lake house there is a really strong blue tinge that almost looks neon in nature. The home of Roma and Marina is more golden hued, while outside in the normal world daylight shots can be very neutral looking. The detail levels are usually very high, with the outdoor day lit shots being the most revealing. However, there is one major flaw that draws the score down dramatically and that is the inclusion of banding EVERYWHERE! Under the water and in complete darkness is the worst, where you can see layer after layer of banding. Sometimes it’s not very noticeable, but other times it can be downright blatantly overpowering.

Scream Factory provides both 5.1 and 2.0 DTS-HD MA tracks in both English dub AND the original Russian language as well. Personally I way preferred the Russian track as it sounded more natural (the English dub is pretty mediocre for the voice acting), but both tracks are about equal sonically. The mix is strong in the front of the room, but it allows for some really creepy ambient effect jump scares with the back channels and LFE off and on throughout the movie. The creepy score flows effortlessly through all 6 speakers and dialog is clean and clear for the most part (there’s a few times where their friend Ilya speaks that I had a hard time understanding, but I suspect that was because of his mumbling more than anything). It’s a standard fare mix for a jump scare horror movie, and it does it well.

I’m not sure if this is a Russian thing, or a mistake in the creation, but the creature in the film is less a Mermaid (at least by our standards), but your typical haunted ghost. There’s a few moments where she sprouts some amphibious features, but mostly it seems like she’s a departed spirit rather than a half fish, half human type creature. Ah well, it’s still a fun movie with a few neat twists near the end. Scream Factory’s Is solid across the board with video and audio scores, but sadly there is no extras. Worth a solid watch if you’re into foreign monster movies.

Huh, seems interesting. I'll put it on my list you watch. Thanks for the review.

Thanks for the review. It has my curiosity so will see once available on amazon prime/netflix.

Great review as usual. I think you caught a bit of the movie humor in your review, for example..

"The classic water dwelling seductress looking to entrap those who fall under her gaze."

I dont think I have ever met one of those, but will look to this movie to check one out.