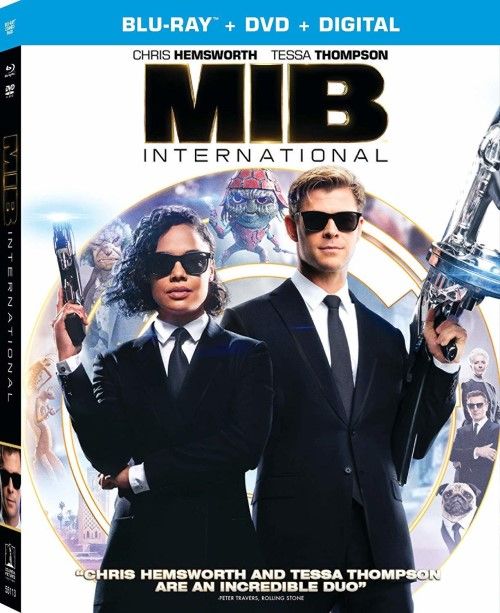 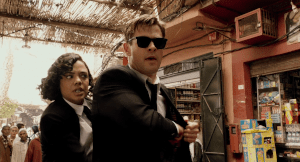 Movie
After 2012’s Men in Black 3 I honestly thought Sony was through with the Men in Black franchise. It was a smash hit that brought Will Smith back for one final ride on the alien train, and actually did something I didn’t think was possible. Make a film that was as good as the first one (almost) and brought the entire series back full circle for a wonderful ending that just worked as a bookend to the trilogy. Will Smith has since moved on and stated several times that he’s probably not going to ever come back to a Men in Black film (and Tommy Lee Jones is a bit too old at the moment. He was getting up there when the 3rd film came out and looked it too), and it seemed that the series would be laid to rest. That is until this year when Sony announced that they were making a FOURTH film in the franchise as a spinoff.

Dealing with the London branch of MIB, the movie stars Chris Hemsworth and Tessa Thompson, both fresh off of the Marvel Universe roller coaster, and summarily flopped in theaters, barely making back it’s budget and skating the line on making an actual profit. I was a bit reticent to see it from the bad word of mouth, but I like Thor..errrr… Chris Hemsworth, and the trailer looked fun so I decided to give it a whirl since I’m a fan of MIB enough that even Men in Black 2 was entertaining to me. Well, after giving it a spin I can understand why it got some lukewarm responses theatrically, but still ended up enjoying it is a popcorn puff movie.

Molly (Tessa Thompson) is an upstart young woman who knows that there is something out there. As a child she had an “experience” with an Alien (and subsequently the Men in Black) and has spent her entire life searching for the mysterious agency. Stumbling upon them finally, Molly catches the eye of Agent O (Emma Thompson, pretty much the only tie to the original trilogy) and is recruited much like Agent J was in Men in Black. O puts Molly (now Agent M) on assignment to the London office as her probationary assignment, where she meets up with Agent H (Chris Hemsworth) who is investigating an alien disturbance. Naturally things go awry quickly and the two agents are disavowed and considered spies when the alien they were investigating gives them the most powerful weapon in the galaxy. 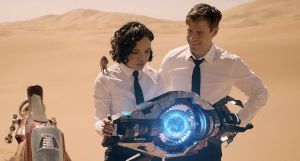 Hunted and on the run, H and M have to figure out whom to trust within the MIB agency, as someone is obviously feeding them false information and a mole is probably running amuck in the government group. Not to mention the fact that a strange race of aliens are hunting them down for the weapon as well. Aliens which seem to have ties to the mysterious “hive” that Agent H once defeated years ago.

Men in Black: International is a film that screams of corporate money grabbing. The franchise was officially dead 7 years ago, and without any of the original cast outside of Emma Thompson returning, this is definitely spinoff material. Chris and Tess give the film their all, and are actually pretty good together. They have a good friendly chemistry going on, with M being the straight laced one ala Agent K (Tommy Lee Jones), and Hemsworth’s H carrying the comedic timing of the film. However, the script is kind of meandering as it wanders through the 2 hour run time, and there are some awkward pacing moments, including a romance hinted at near the end of the film that just doesn’t seem to fit. The movie itself is decent enough, but it’s nothing special and the end battle is kind of anticlimactic. All in all, a decent popcorn film that really doesn’t strive to be anything more than that (outside of trying desperately to create a spinoff franchise that most likely won’t see a sequel).

Rated PG-13 for sci-fi action, some language and suggestive material. 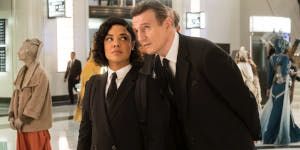 The 2.00:1 framed Blu-ray sits at the top of the heap visually speaking, giving us a stunning transfer in 1080p that just is about as flawless as one could hope for. The digitally shot film was given a 2K digital intermediate for home video, and except for a teensy bit of digital noise that crops up in the Eiffel tower scene, this image is just about flawless. Skin details and tones are clean and natural, and the details levels are jaw dropping. Ironically this is not a wildly flashy and gaudy film despite having some splashes of bright colors strewn throughout (mostly from the aliens), but it is almost boringly reliable and accurate to a fault. Fine details in clothing are readily available to the eye, as well as the laugh lines on Chris Hemsworth’s face in up close and personal shots. Black levels are silky black with great shadow detail and once again, I couldn’t find a glimpse of any major artifacting such as banding or crush to mar the pristine image. 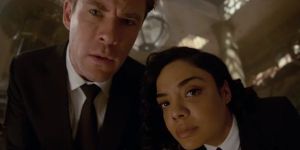 As usual, Sony has given the Blu-ray the “downgraded” 5.1 DTS-HD MA track instead of the Atmos track found on the 4k UHD, but rest assured it is not some measly little 5.1 mix. This is a powerhouse track that really latches on and doesn’t let go till the credits roll. Dialog is crystal clear at all times, locked firmly in the center channel and set in the middle of a massive dynamic range. One minute you can be listening to Agents M and H talking and arguing in the desert, only to be broken up by laser fire and high powered bass the next. Surround channels are wildly active with the sounds of MIB space gear or the copious battle scenes, and the bass is just a non stop sonic assault on your ears. It may not have the spaciousness of the Atmos track, or the light and airy use of panning effects with the overheads, but this is still a rock solid mix that hits hard and takes no prisoners.

• Deleted Scenes
• "Alien-cestry.com": Everyone has a little alien in them! Trace your roots with Alien-cestry.com!
• "Neuralyzer: Like It Never Even Happened": As NOT seen on Alien TV, order now to get your very own Neuralyzer and erase life's embarrassing moments like a pro.
• "Gag Reel": Even top MIB agents forget their lines. See their bloopers in this unforgettable gag reel.
• "New Recruits, Classic Suits": Anchored by the delightful chemistry between Tessa Thompson and Chris Hemsworth and supported by icons like Emma Thompson & Liam Neeson, the cast of MIB International is truly out of this world!
• "Let's Do This! Inside the Action & Stunts": MIB International is packed with action and stunts, go behind the scenes with the team to see how they pulled it off.
• "Look Right Here: Gadgets, Weapons, & Rides": From the iconic Neuralyzer to a tricked out Jag, check out the amazing arsenal of gadgets, weapons and vehicles.

Men in Black: International is a solid movie, but one that seems to lack a purpose for existing. Without Will Smith and Tommy Lee Jones the series feels a bit hollow and empty. Not to mention the fact that the script for this one meanders all over the place and doesn’t seem to have the high stakes that any of the first 3 movies in the franchise possessed. The action is fun enough, and Tess and Chris have some good chemistry, but at the end of the day it’s a decently entertaining flick that isn’t anything more than that. The Blu-ray disc is simply stunning through in terms of specs. The video is amazing, and the audio is nothing short of perfection, and the extras are solid enough as well. Solid rental for a decent watch is my personal take on it.