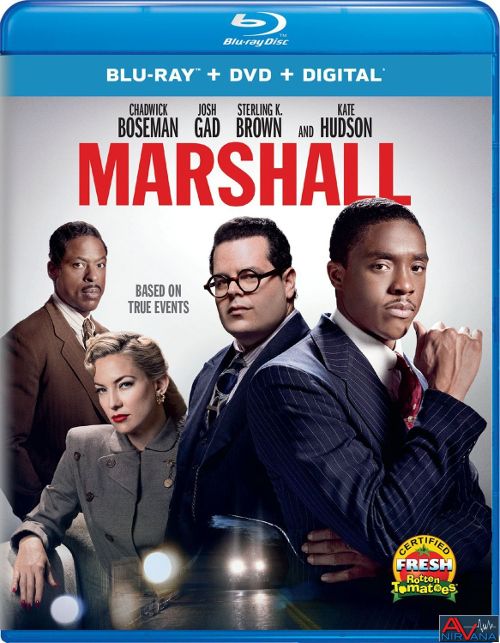 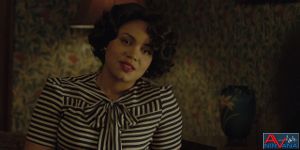 Movie
Marshall is a unique film in that it doesn’t give us the traditional heroes story. Now, that’s not to say that Thurgood Marshall is not a hero to many. He was the FIRST supreme court judge to ever be an African American (the only other one since his tenure from 1957-1991 has been Justice Clarence Thomas, who resides on the bench today), the man to argue “Brown vs. Board of Education” that outlawed segregation in the school system once and for all. His life is legendary, and he has been hailed as one of the NAACP’s most valued attorney’s many times over. It’s just that while this story is ABOUT Thurgood Marshall, he’s is not the star. Marshall takes us back to the 1940s where he tried an unassuming case regarding a black man being accused of raping a white woman in the state of Connecticut. The thing is, he wasn’t allowed to speak or conduct court room questioning by judges orders. He was only allowed to be there and give silent council to one Sam Friedman (Josh Gad), an inexperienced criminal lawyer whose specialty was in insurance claims.

Chadwick Boseman has become Hollywood’s “go to guy” for the black man in important historical roles. Jackie Robinson in 42, James Brown in Get on Up, Jacob King in Message from the King, and most notably the new Black Panther in the Marvel cinematic universe. So it comes as no surprise when he is considered for the role of another important historical figure in cinema, Thurgood Marshall. What I like about Marshall is that it doesn’t take the Oscar bait and go for a huge case like “Brown vs. Board of Education”, or the like in making it a huge, heart swelling drama. Instead it takes an unassuming case at the beginning of his career in the 1940s, just after he had started his tenure as the legal director of the NAACP (the National Association for the Advancement of Colored People), and just makes an interesting story about a great man.

Joseph Spell (Sterling K. Brown) was a colored man accused of rape down in Connecticut by a rich married woman by the name of Eleanor Strubing (Kate Hudson). Naturally Spell was adamant in his denial of the charges, but in the 1940s a black man accused of anything was not exactly believed by the general populace. Stereotypes and bigotry was at one of the strongest parts in history, and the NAACP sent down their most noted lawyer (Marshall) to handle the case for him. The thing is, a visiting attorney from outside of the state has to be vouched for by an attorney in good standing within the state bar association, and this man happened to be one Sam Friedman. Now Sam wasn’t exactly delighted for this, as his partner had started the paperwork without his knowledge, so all the unassuming Jewish lawyer wanted to do was get Marshall accepted by the Judge (played wonderfully by James Cromwell) and be on his merry way. However, Judge Foster is a bit perturbed by an “outsider” coming into his courtroom and only allows Thurgood Marshall into his courtroom under the conditions that he not speak, or examine witnesses during his stay, and act as secondary council to Friedman.

The two men are forced together under odd circumstances, but form a rocky coexistence that very well may be the only chance that Joseph Spell has to make it out of the courtroom without shackles on. What seems like a tough case at first turns incrementally tougher, as the prosecution Loren Willis (Dan Stevens) handily deflects and seemingly anticipates their every move. Doing so at a startling pace and leaving the two lawyers wondering one question. How is this happening? That is, until an epiphany strikes Mr. Marshall. An epiphany that gives Friedman and the NAACP lawyer the ammunition they need to make this one of the most talked about milestones in their burgeoning careers.

As I said above. Marshall is not an Oscar bait film. There are no long speeches with impassioned Jury pleas while the Hans Zimmer score soars in the background. In fact Chadwick Boseman, who is the namesake of the film, plays second fiddle to Sam Friedman. A move which is seemingly confusing. With that being said, Gad really does steal the show. Boseman is excellent as the hard nosed African American attorney, but Josh Gad’s Sam Friedman is the highlight of the film and for good reason. Josh Gad used to be this nerdy little fat comedic character who played in comedies like Pixels, Ice Age, Marmaduke and the like, but he also has tried his hand at dramas. Something has been successful at, but not overly popular. But in recent years the man has really come into his own and has the ability to just absorb himself into his roles in ways that has made him one of my favorite actors of the last 10 years for these types of movies. He has a way of shifting from Olaf in Frozen, to La Fou in Disney’s Beauty and the Beast live action, to dramatic roles like this at the drop of a hat, and doing so with impeccable ease. In history Friedman has always been important as a masterful lawyer, but this shows his start from small time civil cases to full on criminal and civil rights cases in a dramatic way. His boyish charm and frustrated sense of honesty makes you feel like you can see his heart right on his sleeve. Thurgood is his foil by being cold, calculating and completely confident, but you get to see the heroes journey with Friedman. He’s a nobody who wants to stay a nobody. Then he’s given the impossible task to try a case in a system of law he’s never tried, and acting as the front man of someone else. By the end of the film he is cool, calculated, and shares the same confidence that Boseman exudes throughout the entire film.

According to IMDB, Marshall was shot on the Arri Alexa 65, which means it was a 65mm film source and not a digital production. A move which greatly enhances the authenticity of the movie’s look with a filmic texture to it. Marshall is wonderfully lit, and a revelation on Blu-ray as the 65mm source gives off stunning definition and clarity. The movie has been stylized with a brownish hue to simulate the period piece look of the 1940s, with lots of earth browns, strong yellows and pale blues, with softer undertones of amber on the side. The contrast looks to have been boosted ever so slightly to give off that “sunny” look, but the detail levels are superb. Watch as Thurgood Marshall changes the channel in Friedman’s car, paying very special attention to the exquisitely detailed dash. Facial tones are balanced and even, with a warm look to them, and you get to see every little bit of minute details on said faces and intimate clothing bits. Blacks are deep and inky, though the brownish hue and boosted contrast seems to wash a few of the scenes out ever so slightly, but those are few and fleeting.

The 5.1 DTS-HD MA track is subtle and demure, but also very accurate to the genre and style of film at hand. The courtroom drama is excitable and full of the more bombastic moments, with jurors mumbling in the background, and audible whispers and scraping of chairs in the backgrounds. The other portions of the film ARE rather front heavy, with long portions of nothing but dialog, but when Friedman and Marhsall are attacked by racist goons in the bar and out on the street (each a separate event) things get a bit more encompassing, with some bass drops and good use of surrounds in a crowded environment. Vocals are crisp and clean and the track does everything required of it without missing a beat. A commendable drama based audio mix that follows the standards to a T.

Marshall slide under my radar this year, but it did so with a lot of good “word of mouth” on its coat tails. The film can be completely unassuming, simplistic in its nature, but completely enthralling as a societal and court room drama. Everyone involved (even Kate Hudson) was magnificent (I still think Dan Stevens is under utilized in Hollywood). The story is never one that will be some legendary court case, but it makes for a very intriguing STORY, which is much more important in my humble opinion. Universal’s Blu-ray/DVD combo pack is given great video, very nice audio, but sadly NO extras whatsoever. Something which ALMOST made me give the package a 3.5/5 instead of a 4/5 rating as I would have liked to have seen some of the real life discussions about this case. BUUUUUUUUT, it was a teetering vote and the movie more than makes up for the lack of special features on the disc at the end of the day. A great watch is my recommendation.