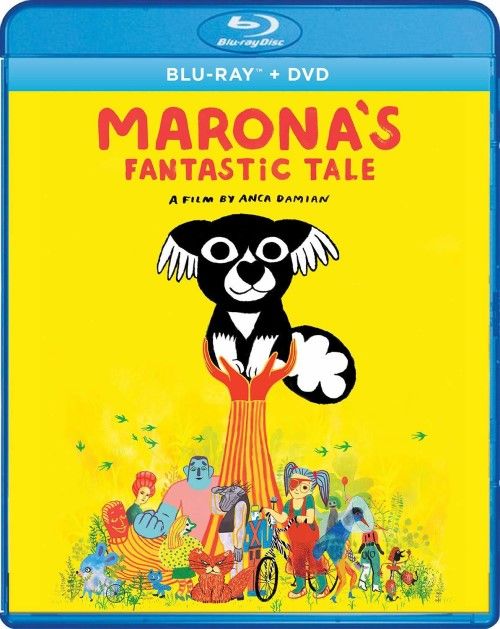 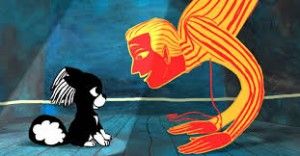 Movie
There’s a plethora (si jefe) of sappy dog movies out there that are designed to pull at your heart strings. Films like A Dog’s Journey, Marley & Me, or Racing In the Rain all are designed from the ground up to hit that sappy note that has you crying about man’s best friend. Luckily French writer/director Anca Damian’s Marona’s Fantastic Tale isn’t one of them. That’s not to say that it doesn’t have it’s tear jerking moments, but the French animated film is adamant about about just showing the audience a pup’s life as seen through the eyes of a canine. There isn’t a whole lot of joy in the film’s story, but not only is it meant to depress you and having you sobbing from sadness. Anca deftly weaves a story of confusion, love, despair, and ultimately peace as a single pup named Marona lives her life from a rough up bringing, to the her final resting spot as a loved pup.

Marona (just named 9 at the beginning of the film) comes from humble beginnings. She’s the ninth pup of a litter that was unexpected. After being taken from her mother and brothers/sisters to the owner of the father, poor Marona is thrust into a world of chaos and fear. Said owner (drawn to be a rich snob) tosses her out as soon as she’s been gifted the pup, and the little runt is soon picked up by a street performer and named Sara (voiced by Lizzie Brochere). Sara and her human are blissfully happy as can be, as she helps with his street act, and he provides her with a safe home and warm bed. After his greed gets the better of him and he’s pulled to a local circus that doesn’t want the dog, Sara runs away into the night, to once more scrounge for herself.

Soon after she’s befriended by a local construction worker at his local build project, and soon becomes inseparable. However, good things come to an end when said worker’s job is done and he’s forced to figure out what to do with a little dog. He tries to take her to his arthritis ridden mother, but that doesn’t work out, and even taking little Sara under his own wing isn’t as great as they would have hoped due to his horrible taste in girlfriends.
.

Once more the poor pup is thrust out onto the streets where she is finally rescued by a little girl and renamed Marona. This new home isn’t IDEA either, as Marona’s new owner is a squirrelly little girl who doesn’t know how to take care of a puppy, and her mother is an overworked single mom living with a bitter old grandfather. However, love comes in time and in many forms, and this home may very well be the peace that Marona has been looking for her whole, short, life.

Marona’s Fantastic Tale is a bittersweet drama that is more concerned about style over telling a cohesive story. The film is visually awe inspiring, using a mixture of various hand drawn and watercolor art styles blended with surreal visual aesthetics to tell the story of love and devotion, pain and sadness. Just watch each particular character that Marona/Sara runs across and watch their visual cues and art styles. Each character in the movie has a story to tell, and most of said story is NOT told through the dialog. It’s a fascinating project to watch unfold and really the only thing that keeps Marona’s Fantastic Tale from being truly AMAZING, is the fact that Anca Damian sometimes gets a little TOO involve with the visuals, leaving the written narrative a bit disjointed at times.

As I said, Marona is not an overly sappy love story about a puppy, but neither is it is a depressing drama either. Instead it tells it’s tale through the eyes and interpreted by a canine’s understanding of the world. It doesn’t understand human abandonment the same way we do, and neither does it understand happiness the same way. While the story isn’t intrinsically happy and upbeat, there is enough joy and peace to go around in the dog’s life as she finds her center and ability to hold onto the simple joys and pleasures of just living in a cruel world.

The world of Marona is brightly colored and lavishly animated with various types of styles in the watercolor and faux chalk variations. Much of the story is told through the animation and the lovely shades of red, blue, green, grey and every color in between makes the whole experience just the more visceral and invigorating. The 1.85:1 framed Blu-ray looks extremely well crafted, with no signs of digital artifacting or problems with line art. Blacks are deep and inky and the bright colors literally pop off the page. The only “down” side to the imagery is simple that the simple art style doesn’t always give away the most details. But that is more of an artistic thing than a problem with the encode so I really don’t fault Shout Factory for that.

Shout provides a 5.1 English Dub as well as the original French dub in 5.1 (both lossless DTS-HD MA) to enjoy with the film. While I’m usually ambivalent about which track the audience chooses I HIGHLY recommend the use of the French dub for this film. The English dub is rather flat and not very engaging due to the lackluster voice acting in English. That being said, the rest of the mix is pretty much identical to the French track, so if you can stomach the English dub than you won’t be disappointed with the rest of the sonics. Vocals are very clean and clear, with most of the dialog in the film being the narration by Marona throughout the film. The rest of the track is a mixture of background noises, ambient tones, and the small amount of vocals spoken by the human characters. Everything is blended smoothly and evenly, with the surrounds being very active with the chaos of Paris, as well as the haunting score. It’s not a wildly ambitious track, but it is well crafted and very impressive, especially when you realize you’re picking up on various background noises that bounce from one side of the room to the next.

Marona’s Fantastic Tale is a sweet, kind, bitter, sad, and totally mesmerizing film that relies heavily on surreal artistry. The movie is one you have to pay rapt attention to in order to pick up on all of the subtle visual story aids and actually benefits a lot from a second viewing. I really REALLY enjoyed the French film more than I expected to, especially after I got used to the non traditional animation style that took me a good 15 minutes to acclimate to. Shout Factory’s Blu-ray is lovingly done in the audio and video department with some sold extras to accompany the sweet film. Definitely something to check out if you’re a dog lover and looking for a “different” type of dog film.