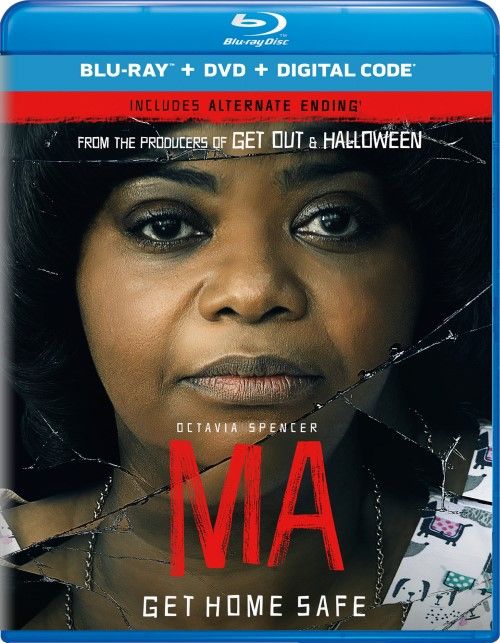 Movie
The best way to sum up Ma is a phrase from the movie itself. “The were out of fireball, but I got this thing called After Shock. He said it’s the same thing”. Tate Taylor’s overstuffed social message themed horror movie is just like that. It’s not exactly what you were hoping for, but it’s a knockoff that gets the job done reasonably well in a budget sort of way.

I initially went into the film with some rather high hopes as Director Tate Taylor has worked with Oscar winner Octavia Spencer before in The Help, as well as directed Jennifer Lawrence’s break out film Winter’s Bone and the Biopic Get on Up as well. Sadly, this is much more like Taylors last feature film, The Girl on the Train than it is his previous films, but it is really not a bad movie…...at least by schlock horror standards.

The trailer pretty much gives away most of the film, and there’s not a whole lot left to the imagination in this little revenge tale. Maggie (Diane Silvers) is the new girl in town and gets taken in by a group of the popular kids where they end up getting a bit baked and drinking out at the local teenage desert spot. After failing to get someone to buy booze for them, local vet assistant Sue Ann (Octavia Spencer) takes pity on the teenagers and offers to not only buy their booze for them, but give them a place to stay and party so they don’t have to drive around drunk and get in trouble. Soon it’s not long before “Ma” (as the teenagers dub her) becomes a little obsessed and creepy. She’s upped the ante by inviting teens over to her house multiple times a week, and by the time that Maggie and her friends realize something’s wrong with her it’s almost too late. They’ve all committed misdemeanors just drinking underage and with that leverage the creepy older woman coerces the kids to keep coming back for some innocent “fun”.

Ma is decidedly formulaic and contrived, and even the audience knows that they’re being manipulated throughout the 99 minute run time. You just can’t take the picture seriously, with Octavia Spencer gleefully hamming it up as the obviously traumatized Sue Ann and just waiting for the dumb teenagers to start getting hacked and whacked like they kind of deserve. The plot doesn’t seem to even TRY to hide the twists and turns, with the audience clued into the fact that this is some sort of revenge plot for Sue Ann from her childhood of being abused, and instead cheerfully just takes that in stride and runs with it. There’s a few moments in the third act where you think something truly different is going to happen (such as when the girls raid Sue Ann’s house looking for the stolen Jewelry and meet her “secret”), but then again, Ma doesn’t even TRY to take itself seriously as a horror venture.

There’s some awkward dialog exchanges between the characters here and there, but overall Ma does make you squirm with the quiet discomfort of is happening. ESPECIALLY when Octavia Spencer starts getting undone and her more unhinged nature comes out. The movie is pure junk food, and Taylor doesn’t even try to cover that up, instead piling on more cotton candy and super sized snickers bar to the point where the audience is gorged with the hammy nature of the plot. The best redeeming factors of the film is Octavia Spencer giving the role her very all, and the fact that the last 20 minutes goes into full slasher territory and with some nice death scenes and some gore.

Rated R for violent/disturbing material, language throughout, sexual content, and for teen drug and alcohol use

Filmed on the Arri Alexa mini cameras and finished at a 2K master for the home video release, Ma’s 2.39:1 AVC encoded image is probably the highlight of the film. Razor sharp and filled with warm colors (despite many of the underground scenarios), the image is crisp and just what one would want for a modern day horror film. Colors are deeply saturated, showing off bright maroon red blood, the pink of Sue Ann’s uniform and the dusty browns of Maggie’s grungy little home. Fine details are resplendent, with every crease and curve on a person’s face readily noticeable, and black levels showing off great depth without much crush at all (I didn’t really notice any major banding either). The flashback sequences look a bit soft and hazy with the earth colored grading, but that’s more of a stylistic choice than anything.

A horror movie tends to be enhanced or detracted from by the audio mix and Ma’s 5.1 DTS-HD MA track certainly does the movie better justice than it really deserves. There’s no Atmos or 7.1, but the 5.1 mix is more than healthy and aggressive, with several stand out jump scare scenes. The audio can lean towards the front of the room at times, but there’s plenty of wild teen partying to pump up the volume and increase the LFE and surround channel activity to make up for those quieter moments. Dialog is clean and clear, and the ambient surround usage during the crazier parts of the movie is quite impressive Lots of low end thump round it out for a fun and exciting audio experience, making it the h2nd best part of the movie right behind the video quality.

Is Ma the next Get Out or Halloween like the cover seems to want to imply? No, it’s most definitely not, but it is far from bottom of the barrel either. It’s a fairly formulaic and straight forward revenge thriller/horror film with a rather nice ending for the genre. The alternate ending in the special features is pretty nifty as well, but I do say the theatrical one seemed to fit better in the movie and I’m glad they kept it. The Blu-ray sports great audio and video, but the extras are just a tad thin to be really considered “good”. Worth it as a horror rental in my humble opinion.

YAY!, when I saw Ma pop up when I got on this site I was excited that you were able to review it since I have been looking forward to seeing this movie. I am sure your review is spot on. The trailer makes it look like it is a straight forward plot. I will rent this one as soon as it is available. Thanks for the review.
Last edited: Aug 22, 2019

Thanks for the review. I will also check it out once available on amazon prime/netflix.

I had the chance to see Ma. For some reason I enjoyed it. Yes you have your typical teens drinking and partying and looking for someone to do wrong to but I really liked Octavia Spencer's role. She keeps her cool until the very end and there is that little twist towards the end that I saw coming from the start but it was still interesting to watch and say ah ha I knew it.
Last edited: Sep 12, 2019