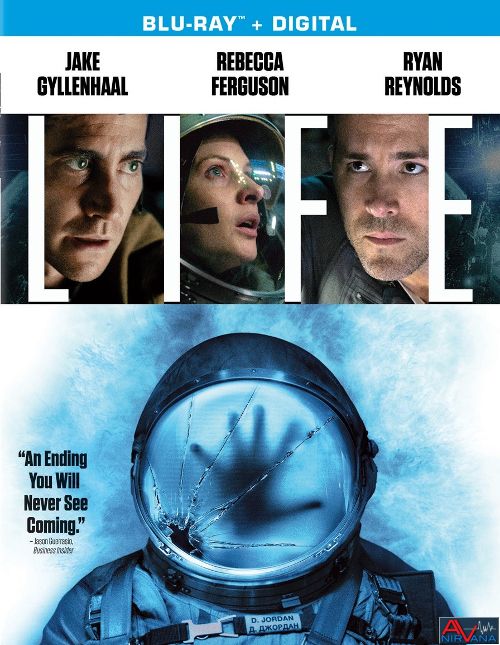 Movie
The first thing that you’re going to think of when you see the trailer for Life is “this looks a lot like Alien”. Well, that’s because it IS a lot like Alien in many ways. The theme of a big scary monster hunting the crew of a space ship in space is nothing new, even Alien borrowed it from other films, but most of us think back to that seminal film due to how insanely popular and influential Ridley Scott’s masterpiece has been on space cinema. I was initially rather turned off by Life due to the very obvious looking similarities. I didn’t want to “sully” my beloved Alien with a knockoff, but I LOVE my sci-fi, so there was no way around the fact that I WAS going to check it out. After watching the film a couple of times, I have to say that I actually really like it. There are some obvious clichés and sci-fi tropes that are re-used from a dozen other films, but it’s intense and rather creepy. Something that I didn’t think it would be after being so desensitized to horror and sci-fi films, but I can attribute much of the scares to the creators going back to the old-style use of horror (much like Alien) instead of your typical jump scares or blood n gore.

The international space station has just taken on a probe that has traveled all the way from Mars (everyone’s new “frontier” in the world of space travel due to the upcoming trip there in a few dozen years) with all sorts of samples to analyze, and the crew of the space station are MORE than eager to check it out. There’s the standard rock and mineral samples, but lo and behold, the crew actually finds life in the form of a microscopic entity. They and everyone on Earth are ecstatic, and while the champagne is being broken out back home, the crew are at work inspecting the little creature, dubbed Calvin. It doesn’t take a rocket scientist to see that this is going to turn south in a hurry, and south is exactly where it goes when Calvin starts replicating faster and faster, eventually causing a breach in their security.

Munching on the lead scientist (played by Ariyon Bakare), it starts to feed and grow, becoming more intelligent as it grows and more cunning in the way that it hunts down its prey. One by one the small crew is taken out, until there are only three left. CDC analyst Miranda North (the bewitching Rebecca Ferguson), Pilot David Jordan (Jake Gyllenhaal), and Sho Murakami (the ever present Japanese Hiroyuki Sanada). With a monstrous being of incredible power and cunning closing in on them, the three remaining survivors have to figure out a way to keep Calvin contained in deep space before he finds a way to overpower them all and ride the descending space station down into a decaying orbit, right into an unsuspecting world.

The biggest boon and biggest curse of Life is the simplicity of the film. There’s no massive backstory, no big romance to figure out. Instead it’s a very focused story about survival with a nasty bad monster chasing you. In that it really DOES remind me a lot of Alien and that is one of the biggest good things about the movie. On the other hand, that simplicity is also Life’s biggest downfall. The characters have a hard time being emotionally resonate, as they don’t have any big back story. Sho is an expecting father, David is the guy who’s spent too much time in space, while the other is the mysterious CDC operative with a hidden agenda. That really isn’t a big thing though, because those are just elements thrown at you over the course of a few minutes and the rest of the time they’re running from Calvin. As such, there’s very little time to bond with them and instead we’re left seeing the crew as expendables to be munched on by our resident alien visitor.

Despite those flaws, I felt the movie was surprisingly well acted. Gyllenhaal, Ferguson and even Ryan Reynolds did a great job and the energy they exuded helped make the rather generic space thriller a lot more fun that it should have been. My only complaint besides characterization is the fact that EVERYONE knew that there would be a twist at end thanks to the front cover having it splashed all over. A bit annoying as you’re constantly trying to guess what it is, and by the time the ending scene comes up you’ve already figured it out. Not a huge deal with the film being as simple as it is, but something I wish would have been kept hidden better.

Rated R for language throughout, some sci-fi violence and terror

Sony’s 2.39:1 framed space epic isn’t one that will jump off the screen at you, but it also wasn’t designed that way either. There’s a flat slate blue and grey filter applied to the film lens (which was filmed with Arri Alexa digital cameras at 3.4k and then mastered at 2K) that gives a sense of dimness and bleakness while still giving view to some impressive colors when needed. Usually that comes in the form of the CGI blood, or lights coming from the interior cabins of the space station. Facial detail is good, but never exemplary, as the flatness of the image translates over into facial details as well. There are some distinctly great looking set pieces though, such as the astronaut’s suits or the little shifting details on Calvin’s organic “cthulu” body. Black levels are very impressive at times, but also can fall pretty to crush and the occasional flicker of banding (the bane of most Blu-rays). It’s a good looking disc, and fairly clean of any digital imperfections, but the stylistic choices used for the colors make it so that the image doesn’t “pop” as much as other demo worthy films.

Wowza. That’s all I can really say. My jaw was hanging open after my first viewing of Life and by the second (when I viewed the 4K disc) I was truly impressed with the track Sony has a habit of putting DTS-HD MA on the 1080p Blu-rays while giving the 4K disc the upgrade to Atmos (dangling the carrot of upgraditis, so to speak), and while I do naturally give the nod to the Atmos mix, there really is NOT that much different between the two audio tracks on the two discs. That’s not in ANY way a knock on the Atmos track, but a really big pat on the back for the 7.1 DTS-HD MA experience on the Blu-ray. It’s just THAT good. Right from the get go we’re privy to some incredibly earth shaking LFE from the space stations creaks and groans, as well as a low engine throb that just pules and permeates the listening center. Dialog is always crisp and clean, locked up in the center channel like it’s supposed to, and the surrounds get an amazingly intense workout with all sorts of pings, dings, creaks, groans and screams as Calvin terrorizes the giant prison that is the space station. Sonically, this is about as perfect as you can get, and the sense of claustrophobia is intensely powerful and immersive. Easily a knockout track from Sony.

Life may not be the perfect clone of Alien that we might have wanted, but I was rather entertained and though it was a much better film than other critics give it credit for. There were some stereotypical space/horror clichés that got overused, and the front of the cover unfortunately gives away that there will be an obvious twist ending (one that is pretty easy to see coming if you KNOW that there’s a twist ending), but it was a nice throwback to a style of film making that hasn’t really been seen since the late 90s. The video is solid, and the audio is nothing short of incredible, making it the perfect audio demo disc for 2017. Recommended for a good watch.
.

Yes I hear the LFE is MASSIVE. I will have to rent this one.

it is pretty insane. Deep and POWERFUL

Michael Scott said:
it is pretty insane. Deep and POWERFUL
Click to expand...

I am waiting for my Dayton wireless link to arrive today to place one of my subs nearfield. Can't wait to watch Life then.

Wife and I saw it and we really liked it. Nothing new to the screen but enjoyable indeed especially the LFE.

Sounds interesting, although I never was a big Alien fan. I did like Alien vs Predator.