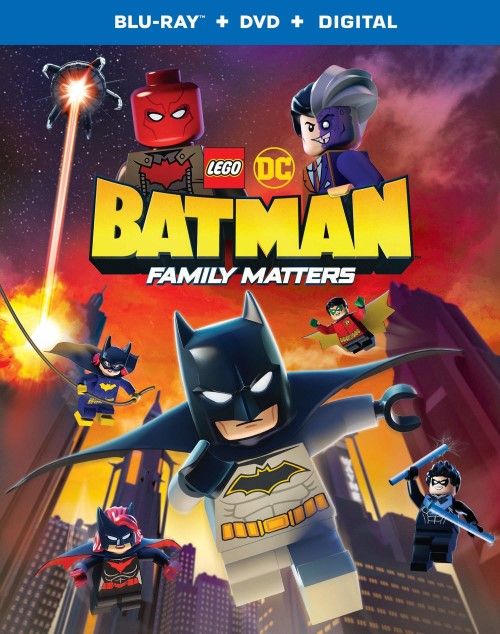 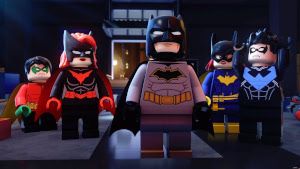 Movie
The Lego DC superhero films are not ones to be misconstrued as sequels of the hit The Lego Movie films or any of it’s spinoffs. Instead Lego DC films are really aimed at very young children and are based off of the Lego video game cut scene style more than the theatrical releases. They’re not exactly high art or meant for adults, with their silly themes and slapstick humor, but they are rather charming and certainly much more palatable than many of the other kids movies out there. Lego DC: Batman – Family Matters is the newest of these DTV adventures, and actually one of the better ones if you sit down and think about it.

Bruce Wayne (Troy Baker) is pretty much sick of his regular life personal. He’s always been Batman at heart with Bruce Wayne being just the mask he plays for the general public. Instead of being bored out of his mind with board meetings and the like, he’d rather be out fighting crime in body armor, kicking butt and taking names as he does so. In an effort to consolidate his time into a more streamlined nature, he sells Wayne Enterprises off and takes up crime fighting full time. HOWEVER, he ends up playing right into the hands of a new villain in town. One who knows their secret identities and has a play to capture them all and make them pay. This villain is the Red Hood (who we all know is Jason Todd, one of the first Robin’s come home to roost). 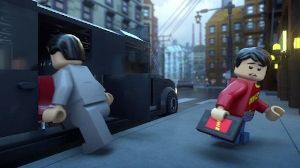 Simultaneously The Red Hood unleashes Two Face (Christian Lanz) on the city, who wreaks his own brand of terror as the Red Hood rounds up and captures each and every one of the Bat oriented superheros (Batgirl, Damien Wayne/Robin, Nightwing, BatWoman...who seems to be making an appearance due to the fact that she’s getting her own live action show on The CW). The only thing is, even though Jason Todd/The Red Hood has his own devious plans, they’re nothing compared to the mistake that Bruce Wayne has made by authorizing a rogue AI who only wants to make things more “efficient”, and this efficiency naturally comes in the form of a computer who wants to take over the world, leaving our intrepid heroes the only one who can stop it.

Lego DC: Batman – Family Matters isn’t nearly as goofy and silly as some of the previous Lego DC movies. Sure, it’s still got a lot of wink and nod humor and the jokes come fast and heavy, but it plays out much more like a traditional adventure film rather than a stupid kids movie. The inclusion of the entire “Bat Family” is especially nifty, and one of the highlights of the entire production is watching Will Friedle (who voiced the new Batman in Batman: Beyond ) ham it up as Nightwing. Will has always been a fantastic addition to the Batman animated universe, and with Batman Beyond coming to Blu-ray in the next few months, only acts to whet the appetite more even more. 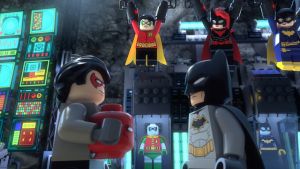 I was actually a little bit surprised by Family Matters. This was one of the best looking Lego animated films that I’ve seen from Warner Brothers (outside of the blockbuster Lego movies) and is sharp as a digital tack on all fronts. The colors are bold and brilliantly saturated, with the blues and blacks of Nightwing’s costume accenting the red and green of Robins. Or even the subtle grays and pale blues of Batman’s costume showing up with massive strength on screen. There’s almost no banding (just a little in a few background scenes, and those are fleeting), the simplistic Lego style animation is really well detailed all the way across the board. There’s a few scenes out on the streets where it’s obvious the budget was strained a bit, and some textures look a bit soft, otherwise this is an all around stellar looking Blu-ray. 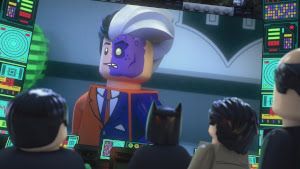 The 5.1 DTS-HD MA track is quite lively as well, albeit does show some of the limitations of the budget in the mix. The track has a really nice level of LFE to it, accentuating the action scenes with lots of rumbles and booms to excite the bass nerds in all of us. The surrounds can be a bit weak at times, with a definite front heavy sound to them for a good amount of the runtime. That’s not to say the surrounds are completely dead, as they do liven up with the action sequences, but this is not a mix that’s going to really stretch the limitations of the 5.1 lossless abilities.

Lego DC: Batman – Family Matters is one of the more fun of the kiddy friendly Lego Batman oriented movies that we’ve seen lately. It’s not nearly as silly and slapstick as some of the previous entries, and while it’s not some dark New 52 style reboot, it’s got a more mature feel to it than I was expecting. At the end of the day it’s still a kid friendly film that’s really designed for the 12 year and under crowd, but it’s fun enough that adults will get a kick out of the antics instead of wishing to hang themselves as their children press the play button time and time again. The Blu-ray itself is quite nice, with great video, good audio, but a sadly lacking set of extras to dig through. Worth it as fun watch if you’ve got kids.