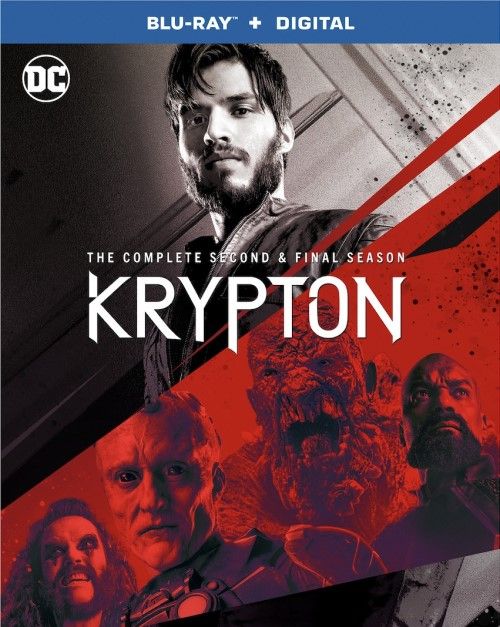 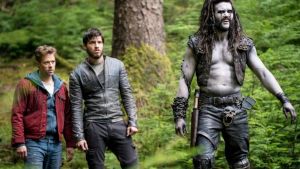 Movie
Ahhh the SyFy channel. Fans of science fiction who have stuck with them back when they were just the simple Sci-fi channel have this sense of utter dread when they start enjoying a new TV show on the channel’s lineup. First reaction is “hey, this is kinda good, I’m digging this” followed very shortly by the constant fear of “oh my goodness, this is actually good…..when are they going to cancel it?!”. A sensation that 50% of the time comes to fruition in the first 2-3 years max. There have been some long running decent sci-fi shows on the network like Stargate SG-1, Stargate Atlantis, The Killjoys etc, but only a person who has lived through the infamous cutting off Farscape before it’s final season, or screaming impotently at the screen when they announced Dark Matter’s extremely brutal demise after 3 seasons can understand the cynical acceptance that we had when Krypton got canceled barely 48 hours after it’s finale aired by SyFy. As someone who has watched them cut down show after show, I was pretty certain this one would get the axe early, simply because it got GREAT in it’s second season. Pretty much any show that I adore on SyFy and 20th Century Fox (I’m still bitter about Dollhouse and Firefly) gets cut off at the knees after 2-3 years and I was summarily expecting this one to end too. Especially when it got REALLY good this year and was amping up for a fantastic 3rd season. However, the show runners are not letting it die quickly, as the producers have been shopping around with Netflix , the DC Universe streaming service, and several others to pick up for the 3rd season, so hopefully we get a continuation of this great show.

As someone who is experiencing a bit of a “superhero show burnout” after falling in love with the Arrowverse, Krypton was a breathe of fresh air. It was a bit more dark, a bit slower paced, and didn’t have the copious amounts of teeny angst that The CW shows are normally known for. Not to mention that it shied away from making grandiose socio-political statements like Supergirl and Black Lightning were simply BATHED in. I know there’s going to be some spoilers ahead for the first season of Krypton, but it simply can’t be helped. The first season focused on the infamous city of Kandor in Superman lore back on the world of Krypton in the days of Seg-El, the grandfather of Superman himself (Kal-El). Back then nobody knew of the impending doom of Krypton, and he factions were still kind of at war with each other. What started out as a simple prequel about the life of Seg-El takes a complete 90 degree turn into left field with the return of General Zod from the future (Colin Salmon), shifting it directly into an elseworlds (alternate “what if?” type story) that really just opened up the possibilities. 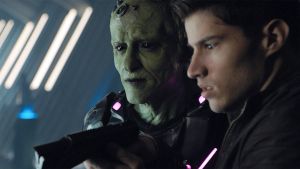 Last season Zod and Seg defeated Brainiac by sending him to the Phantom zone, but Seg was trapped in there with him. Doing what General Zod does best, Zod takes over as supreme leader of Krypton, pushing force his fascist rule in an effort to turn Krypton from destroyed civilization and technological wizards to universe and world conquerors. Now the resistance from the religious war they fought before has turned into a resistance from Zod himself, as the underground turns their attention to the monster in charge of their civilization. Seg is naturally pulled from the phantom zone, but he’s got a little traveler in his head with him. Brainiac has infused himself with Seg, and the two have become temporarily one. With the help of Seg’s returned form and with the help (barely) from bounty hunter Lobo (Emmett J. Scanlan), they look to destroy Brainiac once and for all, and keep Zod from destroying their civilization as much as Brainiac would have.

Season 1 of Krypton was a solid entry, but felt slightly conflicted with itself. The first half of the show felt like it wanted to be a sci-fi version of Game of Thrones, wile it’s second season turned into an elseworlds sci-fi bonanza. The show was kind of constrained, and it felt like the characters were just not given enough room to breathe. The second season unleashes those shackles and really expands the Krypton universe a lot. The show expands outside of a cave and a few small buildings into different planets, and into space combat as well. Characters that felt cliched and stale in the first year are given room to breathe and expand as well, and the show gets a MASSIVE boost in popularity and fun with the inclusion of Lobo (who was so popular they were even going to do a spin-off show about him until SyFy canceled it and Krypton in one announcement). Emmett J. Scanlan is PERFECT as the violent biker bounty hunter, playing him with a sense of bizarre gonzoesque brutality and crudity that fits his comic character to a T. I was literally loving every second of him on screen and was really looking forward to him in season 3 as well (which may or nay not happen depending on how the network shopping goes). When I say Krypton got a big boost in the second season, I mean it too. The first season was good, but season 2 is simply phenomenal. The characters mesh, the war with Zod is incredible, and the need to stick to Superman canon is completely thrown out the window as it moves into Elseworlds status. 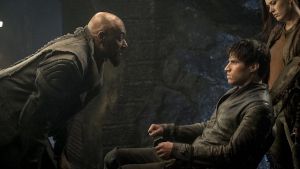 Season 2 of Krypton looks much like the first season in that it is bathed in darkness, with deep blues and a glossy look to it. The move to Wegnor for the resistance adds in some much needed color, with a sort of Mars like dusty red to it’s grading. The armor on the Sagitarious is still deep and inky, and the show feels very sleek and futuristic, even when running around the dark and gloomy city with stone parapets. Fine details are simply superb, ranging from the scruffy look of Lobo, to the curves and lines on battle ships and armor. Blacks are sickeningly deep and silky looking, but I did notice some banding that crops up here and there (the beginning of episode 9 is a very obvious one). It’s a great looking 1080p transfer, and even with five 45 minute episodes on each disc, the show manages to look excellent. 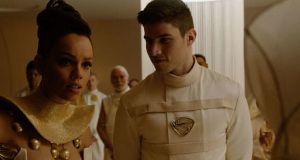 The show's audio is pretty much par for the course if you listened to last season. It's a great sounding track, but it's not going to shock and awe you with it's power and ferocity. The show is primarily a dramatic series with some good scoring. Action gets a little more heated and full figured, but the majority of the show is dialog driven and simply forward heavy. The surrounds do get to come out and play with the battle scenes, and the score flows nicely throughout, but this is not going to be a mix that blasts you from all angles. LFE is tight and punchy for the score, and adds some weight with the thundering of Doomsday's feet, or the rumble of an engine. Solid, simple, and good, Krypton's 5.1 DTS-HD MA track is more than adequate for the job at hand while not being tippy top tier.

The second (and final) season of Krypton is a great example of a show that really hits its stride in the sophomore year. The characters are more compelling (outside of Val-El), the action better, and the scope just widens up with the war between Krypton and Wegnor. Sadly the SyFy channel does what they do best and cancel the show just as it was getting good (seems a perfect copy of what happened with Stargate: Universe). I was actually worried that Warner Brothers was going to do what they normally do with shows that get canceled and relegate it to DVD only release, or maybe a Warner Archive Blu-ray set. Luckily the show goes out with a bang on Blu-ray, and even comes with a “complete series” boxset as well. While the show isn’t wrapped up as of yet (remember, they’re still shopping around for another network), but the show is compelling, filled with fun, and a HUGE breathe of fresh air for the glut of overly angstly and emo super hero shows that have been filling broadcast TV with for the last 7 or 8 years. Highly recommended.

Thanks for the review. I will check this out. Typically, for SyFy show, I wait to see if it survives to the second season or third to see if it is worth seeing. lol.
You must log in or register to reply here.
Share:
Facebook Twitter Reddit Pinterest Tumblr WhatsApp Email Link