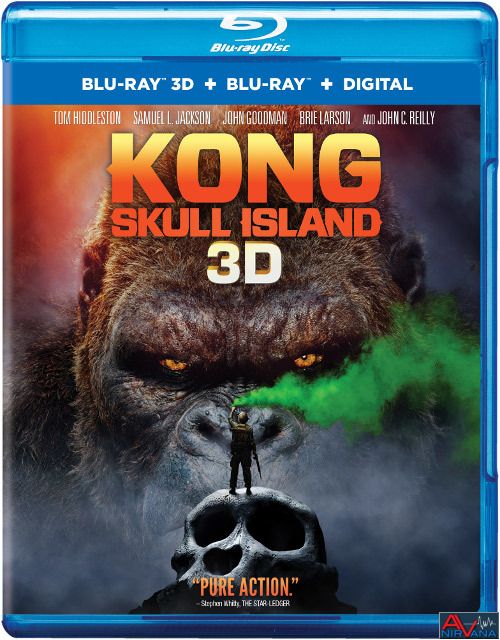 Movie
It seems that comprehensive shared world building has been a common theme among franchises ever since Marvel made it popular. More and more films sharing the same world as other films, with nods and winks to previous films as well as crossovers. As I said, Marvel really kickstarted the fad back into existence (it has always existed, just not in as large quantities as today it seems) with the proliferation of the comic book resurgence, and more and more franchises are following that pattern. DC has their own extended universe, and now Warner Brothers is following suit with the Godzilla universe. A lot of people weren’t very pleased with Gareth Edwards’ 2013 reimaging of Godzilla, but I actually enjoyed the movie immensely. It was a flawed film for sure, but there was lot of explosions, gunfire and Godzilla himself pulling off some muto crunching in the epic last battle. Now when they showed the trailer for Kong: Skull Island and showed Kong as this massive, building sized, creature and hinted that they were in the shared universe, we KNEW what WB was going for. It screams Godzilla vs. King Kong, and I personally can’t wait. Kong: Skull Island happens to fix a few of the flaws that we experienced in Godzilla, but introduces several of its own, making it ever so slightly less enjoyable than the afore mentioned film.

Kong: Skull Island takes place quite a few years back before Godzilla, right as the Vietnam war is wrapping up (in fact, the war is announced over on the TV in the opening moments of the film). We’re privy Bill Randa (John Goodman) and Houston Brooks (Corey Hawkins) of Monarch industries (little wink and nod to our underwater monster friend) begging the U.S. government for funds to go out to an uncharted “Bermuda triangle” like island known as Skull Island. They phrase it as a survey mission, but Bill and Houston have an ulterior motive. Teaming up with a military escort led by Colonel Preston Packard (Samuel L. Jackson), a war photograph named Mason Weaver (Brie Larson) and ex SAS specialist James Conrad (Tom Hiddleston), the clandestine organization heads out for some innocent site seeing. Well, we obviously know that the trip isn’t so innocent, but it doesn’t take long for the rest of the escort to know it too. The minute the helicopters make it through the bad weather surrounding the island, they are attacked by an enraged King Kong. Furiously crushing the copters out of the sky, Kong slaughters half of the armed escort, and leaves the rest scattered around the island, trying desperately to make it to the rendezvous point in time.

As the groups are split up, we get fractured pieces of their understanding. Colonel Packard and his men are incensed at the attack by the giant gorilla, and are FULLY intending to go back to one of the downed birds and get some serious firepower together. Mason, James and a few others stumble into a tribe of indigenous people who have been living there for thousands of years, and in their midst, is a slightly crazed WWII pilot who was shot down over 30 years prior (played by John C. Reilly). It seems that Kong isn’t the monster they thought he was. Skull island is a home to countless monstrous beings that have been frozen in time for centuries while the world moved on and the rest of their species died out. Kong is the last of his overgrown gorilla kind, and he is actually the protector of this little world. Protector you say? Against WHAT? Well, there just so happens to be giant lizard creatures who live under ground, and while Kong patrols the region above the surface, they live underground, unable to harm the creatures and humans up top. The thing is, the arrival of the humans has upset the balance of nature and their seismic devices have awakened the mother of all beasts. The most powerful underground dwelling monster that has ever lived on the island, and Kong may not be able to stop it alone.

Kong: Skull Island deviates drastically from the classic lore (much like the 2013 Godzilla did), and instead mirrors itself after the 2013 monster flick. While the tone and 1970s feel of the movie is quite different, the plot unfolds at a similar pace and takes beats from Godzilla in large quantities. I kind of expected that considering Warner is gearing up for Godzilla vs. King Kong, but sometimes this can act as a detriment to the movie. Humans interfere with the natural habitat, monsters get unleased on the world, and Kong has to go out and smash some monster butt while the human military machine is worthless in taking down said beasties. In fact, replace the term “Godzilla” with “Kong” and you’d have virtually the same movie. Now, on the other hand, there are quite a few good things going for the flick. One of them being so similar to Godzilla. Godzilla was a blast to watch (for me personally, I know a lot of people hated it), and the similar beats made for a lot of fun as Kong ravages the muto like “skull crushers” we watch on as the military can’t do jack to save themselves. The locale change and the shift to the 1970s gives a tonally different feel to the movie that works well and makes it feel a little different than Godzilla at times.

Acting wise, this is a mixed bag. In a monster movie like Kong: Skull Island we’re not so worried about the humans. In fact, they tend to get in the way more often than not. Tom Hiddleston is there to make the girls titter with glee, and Brie Larson and the rest of the cast are pretty much expendable. The only ones who add any spark of life to the human interlopers is the inclusion of John C. Reilly as the slightly loopy WWII vet, and Samuel L. Jackson playing his normal over the top character. Beyond that, we just want to see Kong smash.

Rated PG-13 for intense sequences of sci-fi violence and action, and for brief strong language.

Kong: Skull Island was shot using the Arri Alexa cameras at a 3.4K resolution and then mastered with a 2K digital intermediary for the final release on home video. Which means this 4K UHD disc is once again an upscale. Again, that's not a horrible thing, as many of the best looking 4K discs out there come from 2K upscales as the HDR 10 is the real treat. Kong: Skull Island enjoys a healthy upgrade over the Blu-ray in terms of visual clarity and crispness, with facial details and the lush jungle island backstop showing visibly more details than the Blu-ray. The HDR 10 is once again the real treat, with the bright colors of the island really popping off the screen. The almost puke green of the death valley "pit" where they battle the monsters is beautifully deep and hazy without showing banding or anything, while the orange/yellow tinge to the filter is vibrantly sharp. The island greenery itself is jaw dropping, with green leafy vegetation that is so realistic you can almost reach out touch them. blacks still maintain a good depth and show off plenty of shadow detail. My only real complaint is that besides the HDR coloring, the detail is not AS big of an upgrade as I would have liked.

I was actually really impressed by the 3D conversion in Skull Island. I'm always a bit cynical when it comes to 3D as I tend to see crosstalk and other artifacting in the presentation, but Skull Island is one of the best 3D presentations I have seen on the format. The colors are a teensy bit darker than the 2D version, but other than that there are some great instances of bright popping coloring, and the depth is incredible. There's the typical "slo-mo" action shots that are meant for 3D, but there's quite a bit of quick action stuff that really pops as well. Look at the final battle between the monster and Kong near the end, especially the blades of the old ship rotor that Kong swings around like a mace. Blacks sometimes do get a bit TOO dark (the curse of 3D), but overall its' a really awesome looking presentation.

Warner has been strangely leaving off the Atmos track on the last few 3D films that they have come out with (the first that I noticed it was Fantastic Beasts) and Kong: Skull Island follows in that same pattern. Now, the 5.1 DTS-HD MA track on board the disc (and on the 4K and 2D discs as well) is no slouch. It has just as much power and ferocity as the Atmos track, it just gives up a few slight points due to the fact that the lack of overheads and certain directional elements of an object based audio track boxes it in ever so slightly. Don’t think that I’m ragging on the 5.1 Mix though, it’s a REALLY close call, as the 5.1 mix is a rocking track. The LFE is punishing, and the surrounds are constantly away with the noises and sounds of the jungle paradise (or prison, depending on your point of view). Overall it’s not AS perfect as the Atmos track, but they’re really hard to differentiate between in certain aspects.

Kong: Skull Island isn’t AS good as the 2013 Godzilla, but I think it got far too much critical bad press than was necessary. Is it a great movie? Of course not. It’s a movie where King Kong runs around on an island and smashes thing while the human element watches on in terror. The downside is that, much like Godzilla, too much time is spent on the human conflict, and not enough time with Kong himself. The audio and video for the release are nothing short of jaw dropping, and the special feature are more than capable. Definitely worth it for a fun mindless romp. If you liked the 2013 Godzilla, I think you’ll get a kick out of Kong. If you hated the film, then Kong will probably not tickle your fancy as well. Now the 3D disc certainly looks amazing in that format, but the downside is that Warner decided to forego the Atmos audio that's available on the 2D and 4K disc and leave only the 5.1 DTS-HD MA track. Again, choosing between formats will depend on how much you like 3D, or how much you want the upgraded audio. The 2D disc in the combo pack will give you the Atmos, but sadly a choice has to be made. Still recommended as a fun watch no matter the format.

This makes for three different versions of this flick... does the 4K disc ship with BD and BD 3D?

You must be completely Kong-ed Out!

for some reason most of the studios have been doing that. Paramount did the same thing with their releases as well (ghost in the shell is identical in setup to Kong).... Sony has stopped releasing 3D alltogether,

Todd Anderson said:
You must be completely Kong-ed Out!
Click to expand...

Thankfully, I was able to get all three versions (2D,3D,UHD) of this in a nice little Best Buy exclusive steelbook package! Pricer, but worth the additional cost.