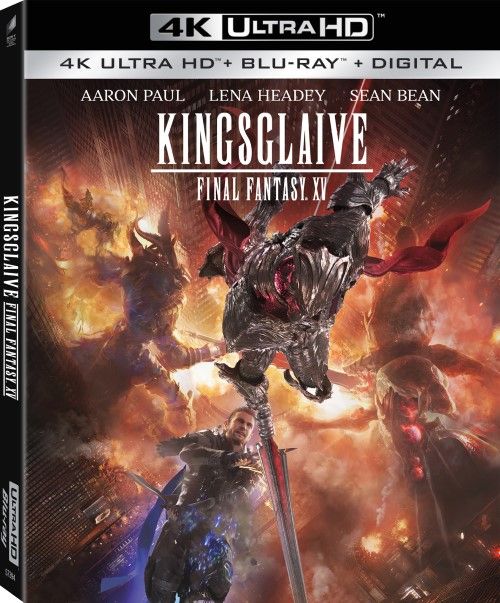 Movie
For those of you who are into videogames, the delay of Final Fantasy XV from months earlier to late November was the instigation of much concern in the gaming community back in 2016. The game had been anticipated for quite some time and it was heavily disheartening to have to wait for several more months to get my PS4 into a non-stop state of use for the next 6 months. However, the powers that be decided to make a prequel film to the game, much like how Final Fantasy VII: Advent Children was made some 10 or so years back. Hardcore fans of the games many not find the movie as engaging and exciting stories told within the very complex game world, but it makes for a fun little animated adventure companion material (much like the Sony animated Resident Evil films do. The movie goes on a bit too long at times, but still carries more than enough popcorn entertainment to be enjoyable.

The Kingdom of Lucis was once a great kingdom, but years ago the Empire of Niflheim strove to take the divine crystal (the heart of the Lucis’ power) and drove the once powerful kingdom back in near defeat. Using the giant crystal, King Regis (Sean Bean) raised a great magical wall around the city of Insomnia, effectively halting the advance of the Niflheim’s technologically advanced war machine. Still, the war has raged for 12 years, with the Lucis Kingdom refusing to give an inch, but suffering great casualties along the way. Now the war is about to be over as the Niflheim Emperor has sent over an envoy with a treaty of peace. If they will accept marriage between the capture princess Lunafreya (Lena Headey) and the son of the king, there will be peace. Well, that and granting the land around Insomnia back to the Niflheim Empire, giving all of the people inside over to another lord.

As with many medieval style treaties, there is to be no peace. The Emperor has set a trap for Regis, and the city of Insomnia is about to be attacked in a way that was though impossible up to this point. The Kingsglaive (a special group of special troops who feed off of the magical power that King Regis provides) has betrayed the city and only one of their own, Nyx Ulric (voiced by “Breaking Bad’s” Aaron Paul) has the will and the way to save the city and his friends from ultimate annihilation.

Kingsglaive: Final Fantasy XV is a technological marvel that needs no explaining. The advances in computer generated cut scene technology has come a LONG way from the days of the original Playstation. Now without the limitations of a game’s minute cut scenes, Sony was given full reign to take that incredibly detailed and gorgeously looking technology and turn it into a full length feature film with a bigger budget. The results are nothing short of spectacular. The ability to make digital animation and motion capture technology looks so photorealistic is enough to make any picture quality nerd drool with envy. The movie is gorgeously cut and animated to the point where you sometimes forget that you’re watch an animated piece of fiction. It’s a fantastically nuanced work of visual art and one that brings the game world to life on the screen, but there are some flaws along the way.

The problem with the movie stems from the fact that it’s TOO dense. The movie tries so very hard to stuff in backstory and plot devices for the game world and just ends up feeling overstuffed and under developed because there is not enough time to adequately flesh out the material needed to bring everyone up to date. Characters feel under developed being that you know so little about their backstory, and the movie seems to act like the casual viewer should know exactly who these characters are and what their motivations are. It’s a curse of having only 2 hours to tell 5 or 6 hours’ worth of material that should have been included to be as impactful as it could. The history of Lucis is easily told, but Nyx, the Niflheim general, the dark wall, it all wreaks of information that is known in the game world through expository telling, but just assumed to be the status quo in the movie. It’s a fun bit of entertainment, but one that feels like too much information and plot devices were included without the proper steps taken to keep the audience up to date which makes it a little less enjoyable.

Rated PG-13 for fantasy violence and action throughout

Taken from a 2K master and upscaled to 4K, Kingsglaive actually looks pretty good. It’s not the most massive leap from 1080p to 2160p ever, but it sports a stronger color saturation, as well as moderately upgraded detail levels. The 2016 animated film was FANTASTIC on Blu-ray, but the limitations of the animation style show its seams a bit more in 4K. The detail levels are moderately enhanced, with forest scenes, and nuances on armor showing the most detail. The backgrounds aren’t nearly as upgraded, and tend to look more like the Blu-ray than not. There’s also a bit of softness to the picture that I didn’t notice in the Blu-ray. That being said, there’s a noticeable improvement to the black levels, and even though the second half of the film doesn’t have a whole lot of “pop”, the HDR enhancements do wonders for the silky blacks and the few primary colors that do pop through the silver/gray/stone looking world.

The 5.1 DTS-HD MA audio track is nothing to poo poo either, despite being the exact same 5.1 mix that was on the Blu-ray. Aggressive and fierce, the track’s main ingredient is a liberal helping of unrelenting bass that just pounds away nearly every second of the film. Dialog is always strong and clean, with no major distortions, and even with the heavy duty LFE channel going nuts, there is still quite a bit of time where front heavy dialog centric scenes take precedence. The high flying magical action is where all the surround and fun comes from, with the cacophony of battle lighting up all 6 channels with a ferocious and well nuanced audio experience. The surrounds get a lot of play with the sounds of shrieking metal during a ship wide explosion, or the whistling of Glaive’s knife cutting through the air before a transport. Immersion is very high in this release, and creates a singularly impressive audio experience that really makes the decent movie that much more fun.

The Ten Commandments is one of the best biblical epics out there, and still a classic to this day. The new 4K UHD encoding of the stunning 2011 master is nothing short of breathtaking and WELL worth the cost up upgrade for those with 4K equipment. My only quibble with the set is the lack of extras from the 2011 release. The 4K disc is a standalone, but it includes discs 1 and 2 of the 2011 release with it's extras, but forgoes the 3rd disc with the extra supplements as well as the supplementary1923 film. So for fans of those you'll want to keep your old Blu-ray sets around for the legacy features. But for the main feature alone, you really can't do much better than this. Definite recommendation.