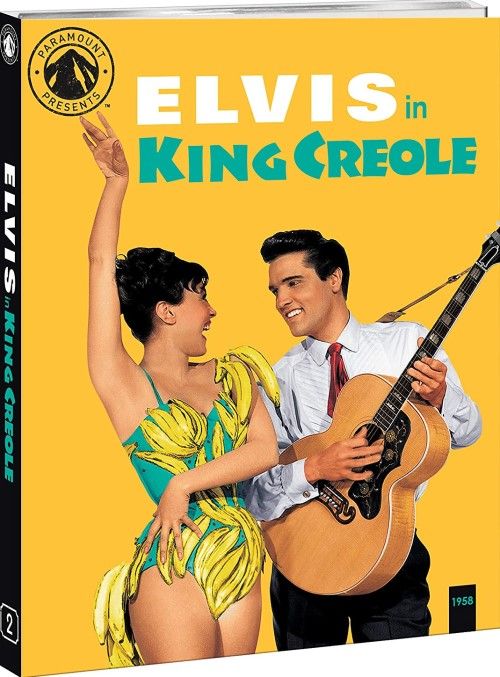 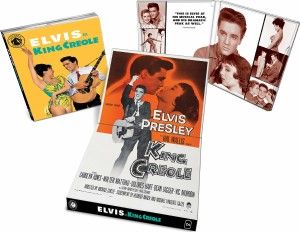 Singers moving to film is nothing new in the entertainment industry, and good old Elvis himself made the attempt back in the 50s with some moderately well received fluff pieces (the most popular of those early works being Jailhouse Rock) before he actually got cast in a GOOD film. I know I may attract the ire of some Elivs fans, but Elvis movies were generally garbage. They were nothing but a vehicle for his singing and most of them were the cheesiest thing you will ever see. While King Creole still uses a musical twist to the story (you can’t have an Elvis movie without him gyrating his hips and singing), it has the distinction of being a good movie in it’s own right, devoid of Elvis’s singing. The movie is fairly deep for the time, a bit dark (for a PG 1958 film), and was a completely serious coming of age/stardom movie complete with love, betrayal, and hint of violence to season things up.

Jimmy Fisher is all set to graduate high school and make his father (played by Dean Jagger, most notable for playing the Major General in White Christmas) proud, only to get held back ANOTHER year thanks to him getting into a fist fight with another student. Bitter and angry at the breaks, Jimmy falls in with the wrong crowd, ultimately robbing a 5 and dime store in an attempt to make a quick buck. Before long his singing talents catch the eye of Mr. Charlie LeGrand (Paul Stewart), the owner of the King Creole night club. Against the will of his father, Jimmy begins a career on stage, singing for the nearly broke club owner and revitalizing it’s popularity due to his unique vocals.

However, Jimmy’s life has a bit of an anchor on it. The King Creole may be a safe haven for Jimmy, but it’s not without it’s bullseye either. You see, Maxie Fields (Walter Matthau) wants what he can’t have, and what he can’t have seems to be Jimmy and his career. Using every bit of trickery, skulduggery, and brute force he can muster, Maxie turns Jimmy’s life into a living nightmare as he tries to maneuver the young man into his fold of paid goons and minions. Before long Jimmy is in so deep that he can’t see a way out, and the only outlets seem to end in him dead, or the ones he loves put through the ringer as well.

As I said above, King Creole is a genuinely good movie and one that Elvis himself has remarked that he thinks of as his best film work to date. And luckily it was also due to having a good director who stretched and pushed his star. Michael Curtiz supposedly asked Elvis to tone everything down a large amount, ranging from his stage persona to the interactions with other characters in the movie. It’s a much less kitschy character and as such Jimmy thrives as Elvis dials it back. He’s a tortured character who’s just trying to do what’s right, even though he’s disgusted with the lot that life has thrown him. He’s not a noble character, but rather a flawed hero who is much more human than Hollywood liked to put out at the time. He’s put opposite some great talent, including the infamous Walter Mathau and Carolyn Jones, who both act as a foil and mirror for the character.

King Creole makes it’s Blu-ray debut with a brand new 4K master struck specifically for this release (framed in 1.78:1 even though the back lists 1.85:1) and the results are very good. If you remember a few days ago when I reviewed To Catch A Thief that I was shocked by the heavy use of DNR that Paramount used for the master. Well, King Creole has a little bit of DNR applied to it (noticeable if you have ever seen the DVD or the 35mm print), but it seems to have been applied much more judiciously. It seems to my eye that the grain is a little softer and that faces are a bit smoother than they SHOULD be, but I will say that it is VERY slight. Facial details are still excellent, and the grain looks natural and copious (although a bit reduced from what I was expecting). The black and white photography is excellent, with good deep shadow details and only some minimal crush. The transfer isn’t the gold standard of all modern transfers, but it is certainly excellent and will please 99% of viewers.

King Creole is missing it’s theatrical mix, but it DOES have a really nice 5.1 Dolby TrueHD mix for the release. The track does the best it can with a 1958 track that wasn’t designed for a giant home theater, and despite a few fluctuations of dialog and some obvious ADR for the singing sequences, the track is more or less excellent. Dialog is usually spot on, but as I said, there is some slight issues where dialog can lower suddenly and go back to normal as a character moves closer and away from the microphone. Surrounds are light for the most part, but once the music numbers kick into high gear it’s all 6 channels running full tilt. The music is superb, with rich bass, strong mids, and solid highs. The front of the room takes most of the work when the music isn’t running, and the simple 5.1 mix does what it can to make the action and drama encompassing, despite the minimal surround usage (not a fault of the mix, it’s a front heavy track that was never designed for 5.1 or above anyways.).

This is the 2nd of the first 3 Paramount Presents line and I honestly have to say that his was a treat. I had forgotten about King Creole until I saw the announcement and realized that this was the first title in a long time where Paramount dug into their back catalog and put a movie out that WASN’T released on Blu-ray already. Luckily the video score is WAY better than the butchery that was To Catch A Thief, and almost as good as Fatal Attraction. I really do hope that we see Paramount dig deeper into their massive back catalog and pull out some more gems like these. Highly recommended.