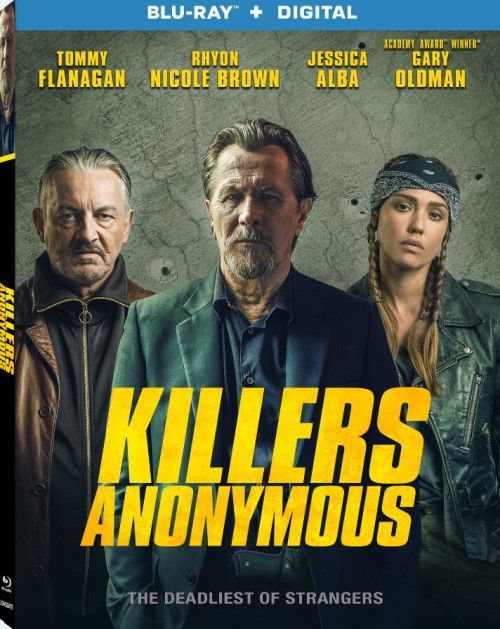 Movie
Killers Anonymous is the type of films that gives critics pains in the gut from viewing, and actors are left with this sense of deep regret and remorse for having stooped to this level in order to take home a quick paycheck. It’s the kind of movie that has no chance of any Oscar status, so the directors/writers attempt to make it as quirky and kitschy as possible, infusing it with genre tropes and subversive twist in an effort to be clever and enjoyable, yet somehow managing to be neither. Writers/Directors Martin Owen and Elizabeth Morris (Elizabeth is actually one of the starring characters as well) made the fantastic low budget horror/thriller Lets Be Evil made this little noir-thriller with the intentions of imitating the 90s Tarantino and Guy Ritchie movies of yesteryear. Infusing it with rapid cuts, twists and turns galore, and lots and lots of red herrings leading up to a battle royale ending that almost feels like this was cut straight out of a graphic novel (complete with CGI blood spray with loud music and stop motion cuts during said blood spray), yet somehow managing to miss the mark so spectacularly that I almost applaud them for said miss.

The film starts out with a bizarre interaction between a lesbian hit woman (played hilariously badly by Jessica Alba) and her handler who is known only as “The Man” (Gary Oldman) over the botched job of killing a sitting U.S. senator. Within minutes of their conversation, The Man sends the hitwoman home, only for her to get gunned down by her lover, who just so happens to also be a hitwoman in the employ of The Man. Fast forward just a bit and we see the real framework of the movie. You see, The Man runs a sort of self help therapy group ala AA for hitmen/women. A place where assassins can come and keep their urges in check, all the while going about their days as a gun for hire.

However, this latest meeting in particular is a bit different, as the assassins in said group have no idea who called the meeting. Soon paranoia and conspiracy theories run high, as the varying members start turning on each other and wondering just who brought this meeting about and what their motive is. Is it the mousy Alice (Rhyon Nicole Brown) has a secret that she’s not telling, the leader Joanna has a few tricks up her sleeve as well, while the foul mouthed Krystal would rather get things over with and kill everyone and move on. The room is a gigantic wheel of snarky and witty assassins looking out for themselves, and no one is willing to to go down for the others.

Killers Anonymous really tries to imitate the John Wick style of a world full of contract killers, complete with a mythos and a set of rules that they have to follow. Blend in the sort of “look, over there!” type of misdirection's and morays that Guy Ritchie is famous for and you have a movie that is DESPERATELY trying to be cool and edgy, but ends up just being an amalgamation of genre tropes and attempts at intelligence, just without the intelligence. By the end of the battle royale style ending I was left not only wondering WHY I had watched this movie, but WHY had any studio actually financed this mess of a script.

Acting wise it’s all pretty run of the mill DTV, and both Jessica Alba and Gary Oldman both wisely stayed on the fringe of this film. Alba is portrayed blatantly on the cover of the film with near top billing, but she’s literally in it for 5 minutes before she dies, and Oldman just kind of mumbles into his beard for about 10 minutes of the movie from the sidelines. He was smart to stay on the outliers of this script, as he is obviously the most veteran actor of the bunch, and he really need not sully his name with the kind of dreck that Killers Anonymous ends up being. After all the misdirections, after all the red herrings, and all the snarkiness, this is just a low budget film with a high concept idea that is poorly executed.

Rated R for bloody violence, and pervasive language including some sexual references

I could find literally next to no information about the shooting style and resolution of Killers Anonymous, but it’s a pretty safe bet that this was a low budget digital shoot judging by the image. The picture is generally clean and clear, with good detail on close up facial shots, but there’s some mild softness in the background and wide angle shots. The interior meeting arena is a mixture of yellows, oranges and greens for a heavy heavy stylistic color grading, but flashbacks and other outdoor glimpses are much more neutral (such as when Joanna takes the rifle shot from her perch). Blacks are solid enough, but there is some digital noise that crops up in the darker sequences. It’s a solid encode with only minimal banding, but it’s so heavily stylized that it will never be a visual stunner.

The 5.1 DTS-HD MA track is also quite capable, but not exactly an exemplary track. The dialog is clean and clear, while the action sequences light up the surround channels with some good activity. Gunshots and slamming doors carry with them a goodly amount of weight, and the mix itself is quite evenly balanced. The track isn’t one to really stand out in a crowd, but it does everything competently enough to where it’s generally pleasing across the board.

Killers Anonymous has its heart in the right place. It’s trying to put a lot of cool ideas at play into a movie that’s almost artistic in the way it carries out it’s violence. However, that is also the undoing of the movie at its core. There’s too many good ideas crammed into a 96 minute film, so that by the end of the run time nothing is fully realized and it’s just an empty attempt at something. Instead of spending the time and money to follow and complete one neat idea, it tries to force about a dozen of them together with the end result being none of them really work. The Blu-ray itself is decent enough, with good video and audio, but only a smattering of extras. Sad to say, this is a 100% skip it recommendation from me. Just run the other direction.

Thanks for the review. I will skip it too. I am surprised to see Jessica Alba in a movie these days. It's not like she needs the money being an entrepreneur. Then again I am sure acting is her first love.