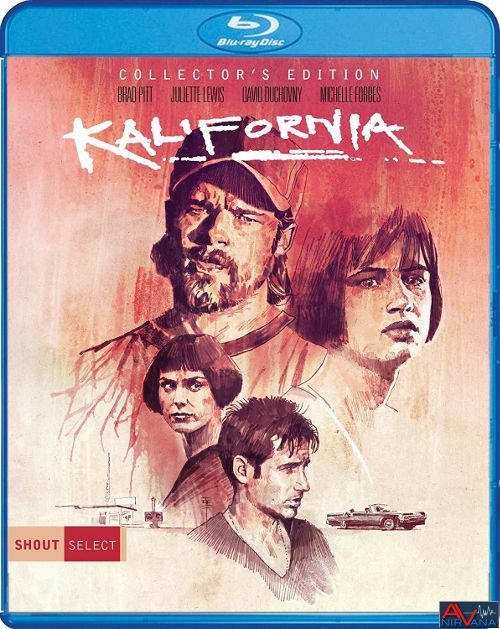 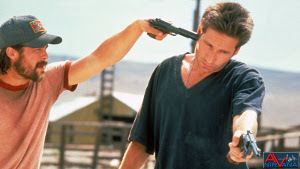 Movie
Ahh, Brad Pitt, the pretty both of the screen. There was once a time when Brad Pitt was like Leonardo DiCaprio. Young, good looking, considered a decent actor, but not much else. Then he evolved into one of the highest paid actors of his time, and still is considered one of the greats. However, there are two sides to Brad Pitt performances. The handsome, suave, debonair Brad Pitt (Legends of the Fall, Ocean’s 11-13, Troy), and then there’s flat out Nicolas Cage insane (12 Monkeys, Fight Club, True Romance) with no balance between the two. Kalifornia falls into the latter category as Pitt goes us probably his most isnane performance to date, playing Early Grayce, a nasty, greasy, hayseed psychopath hitching a ride with his girlfriend from Kentucky to California in a gonzo filmed thriller that is more alike to Natural Born Killers than anything else.

Brian (David Duchovny) and his photographer girlfriend Carrie (Michelle Forbes of Battlestar Galactica Fame) are the artistic type of “upper class” wannabes. Brian is a writer who has found his new calling writing a book about the most infamous murders in the U.S., while Carrie is a photographer whose work is just not accepted anywhere due to her odd and erotic taste in photographs. The two decide to get out of Kentucky where their life has become stagnant and head across country to California, stopping at sites of infamous murders and taking pictures of the sights for Brian’s new book. Sadly the two yuppies are a bit broke and the only way that they can afford the trip across the states is to take on a riding buddy.

In come Early Grayce (Pitt), a hayseed parolee skipping out on his parole officer, and his slightly backwards and slow girlfriend Adele (Juliette Lewis), who agree to split the charges and go with the couple on their way to California. At first it seems like your average road trip, but as the trip goes on Early’s more psychopathic tendencies start coming out. Brain and Carrie are simply worried about the two stiffing them on the bills, but Early keeps his end of the bargain by killing victims along the trip and stealing their money, keeping up the facade of a “normal” hayseed that he seems to be. But as the trip unfolds Early starts to draw Brian into his life crime, going deeper and deeper down the rabbit hole until the two couple’s fates are inexorably entwined.

Kalifornia is a solid thriller, with some down right stellar performances. Brad Pitt is beyond INSANE as Early Gracye. He has lost himself so deeply into the role that you honestly have a hard time reconciling with yourself that it IS actually Brad Pitt. His accent, his mannerisms, the insane actions. They’re all so out of the blue and inspired that I have to truly give the bulk of the credit to the film’s success on his shoulders. Julitte Lewis and Michelle Forbes are great, each showing the opposite end of the intellectual spectrum (Adele is clueless and the epitome of a psychologically abused victim, while Carrie is perfect as the snobby, yuppie photography cliché). The second best part of the film is Duchovny. He’s always been a great actor, but he fits the foil of Early incredibly well and the two play off of each other and his obsession with serial killers soon gets him in so far over his head WITH a serial killer that he takes on a whole new life of his own.

The only MAJOR problem with the film is that it really takes a long while to get going. It’s over an hour into the film before the insanity of Early Grayce really starts to manifest itself. The first hour is more of Brian narrating the film piece by piece as the two couples traverse the nation. You see little glimpses of Early’s psychopathic tendencies with a few murders, but he’s fairly restrained until a little bit past the hour mark. But when that hour mark is up, the movie just goes balls to the walls nuts with the two upscale yuppies getting entrapped in a life of crime ala Natural Born Killers (which Juliette Lewis was fantastic in).

Rated R for strong violence, and for sexuality and language / Unrated (unrated cut)

I can’t see any information on a remaster or anything, and comparing to my older MGM Blu-ray, this appears to be a re-encode of the 2010 Blu-ray. The encode is solid enough, though you can definitely tell that the master is a bit dated. There’s a few specks and flecks of debris on the print, and there is a slightly washed out look to the film. Part of that is due to the fact that the film was slightly stylized with a kind of Neo Noir monochromatic color grading that flits from almost Sin City black and white at the beginning of the film, to heavy earth tones for the rest. Details are usually strong, with a goodly amount of details coming through such as Early’s car throwing up dirt on his landlord’s face, or the grime and mud covering his chest while he digs a giant hole. Blacks tend to be a bit washed out as stated above, and while grain levels are nice, the film seems a TAD soft.

Shout Factory gives us the obligatory “duo” of audio mixes, consisting of a 5.1 DTS-HD MA track and a 2.0 down mixed track in the same lossless encoding. Both tracks sound REALLY similar though, as the 5.1 track is really more of a 3.1 track. The mix is VERY front heavy, with a majority of the heavy lifting all done in the front 3 tracks. There’s some mild ambiance with the score, and a few times where a car crash brings up the surround channels, but 95% of the time the score, the dialog, and the general effects all take place up in the front of the room. LFE is mild, coming through with the opening car crash, as well as a few other times with the music, but otherwise content to withdraw for a majority of the films run time. Comparing against my older MGM disc, this appears to be a DIRECT port, and identical in every way that counts to the previous disc.

​
Kalifornia is a bit long for a thriller, with a strangely Neo Noir twist that makes it both old fashioned and modern at the same time. It’s a bit warped, a bit twisted, but features some great performances by Brad Pitt and David Duchovny. Shout Factory’s Collector’s edition seems to sport the same video and audio scores of the older 2010 MGM Blu-ray, but just about doubles the extras that were available on that old disc (as well as putting bot the Unrated and Rated cuts on their own discs). It’s a solid film, and a solid collector’s edition from Shout Factory, but the upgradability of the disc will solely depend on whether those new special features are something you want to checkout, otherwise this is the definitive edition of the film released domestically so far. Solid Watch.