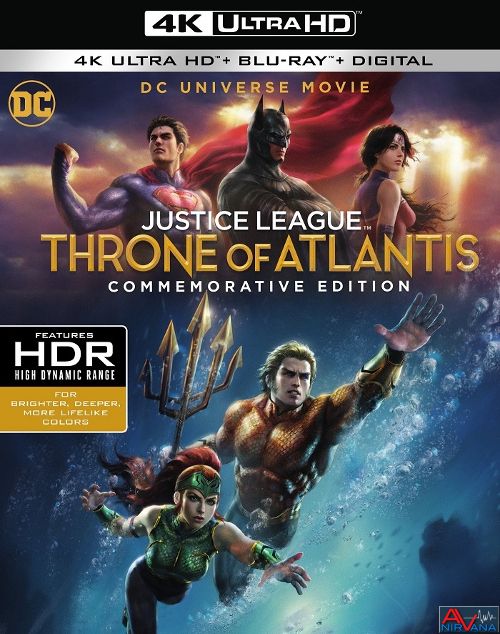 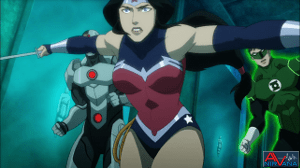 Movie
Justice League: Throne of Atlantis picks up right after the events of Justice League: War, where the majority of the Justice league have had to team up to defeat Darkseid. A grudging realization is starting to form among the super humans that maybe there really is a need for a pooling of powers and the foundations of the full-fledged Justice League begins to form. Ironically the Justice League characters really are more of a background here, as the movie was originally meant to be an Aquaman origins story, but the powers that be feared that Aquaman wouldn’t be a big enough draw for the audience, so they sandwiched in the rest of the crew and relabeled it.

Back in the day, Aquaman was kind of the joke character in the DC universe. He could call upon the power of the sea beasts and walk on land, but that was really it, he never really did a whole lot in the Justice League and most people wrote him off in the comics as well. That all changed when the 52 reboot happened a few years ago and DC drastically changed up and rebooted about 52 superheroes in their comics. Superman became a bit harsher, Wonder Woman gained powers she never had, Hal Jordan came back, and Aquaman was reborn as a MUCH more powerful guardian of the lost city of Atlantis, complete with magical scepters and a physique that could stand up against even the brawniest of supervillains.

This tale goes back to the beginnings of Arthur Curry (voiced by Matt Lanter, who was made popular by voicing Anakin Skywalker in The Clone Wars animated series) and his realization of his destiny. The initial Justice League members are alerted to Atlantis’ presence when the crown prince of Atlantis goes and attacks a U.S. submarine and sets off our heroes on a quest to find out WHO did it. At the same time, Queen Atlanta (Sirena Irwin) summons her own son to her side. Not the crown prince, but rather a young man by the name of Arthur Curry. Arthur was born in the human world, the love child of Arthur’s human father and Queen Atlanta, but raised on dry ground while Atlanta ruled the deep. Hoping to bridge the gap between Humans and Atlantian’s, the Queen hopes to persuade Arthur to take his rightful place as heir to the throne. Unfortunately for her, the crown prince, Orm (Sam Witwer) has other plans, plans that include taking the throne by force and protecting Atlantis in the only way he knows how. By taking his forces to dry land and subjugating the air breathers. Teaming up with Batman (Jason O’Mara), The Flash (Christopher Gorham), Green Lantern (Nathan Fillion), Wonder Woman (Rosario Dawson), Shazam (Sean Astin), Cyborg (Shemar Moore) and Superman (Jerry O’Connell), he must claim his birthright and stop a war between his family by experience, and his family by blood at the same time. 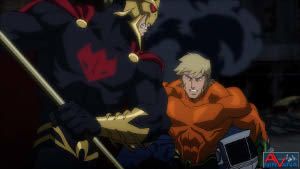 Throne of Atlantis is a bit more awkward than a few of its predecessors, mainly due to the weird hybrid of creating an Aquaman origins story and shoehorning the Justice League into the foreground in an effort to draw that wider audience. As such it feel kind of cramped with too many cooks in the kitchen. The origins of Arthur/Aquaman is actually quite good, and stands as the highlight of the film. The young man who doesn’t know why he carries such incredible physical gifts is brought face to face with his destiny, and we see the forming of the 52 reboot Aquaman on the table. The forcing in of the Justice League really disrupts the flow though, as our attention wavers from Aquaman’s tale, to shift over to Wonder Woman, Superamn, etc waving at us from the sidelines saying “remember us?!”, and then suddenly shifting back to the underwater tale in a jarring snap back.

Don’t take this as a sign that it’s a bad entry into the DCU. It’s still a decent story, and while it’s unfortunate that it tops out at decent, even a decent DC animated film is leagues better than 95% of animated movies (that aren’t Disney/Pixar/Dreamworks) out of the water, and is still dominating Marvel’s animated entries without contest. It’s been nice to see DC create a cohesive universe with the last few movies, and we see that they all are becoming interconnected, much like how Marvel is crafting its live action world. Hopefully next time we get to see Martian Manhunter’s origins, or at least see his inclusion into the team so the circle can become complete.

Rated PG-13 for sci-fi violence and action throughout 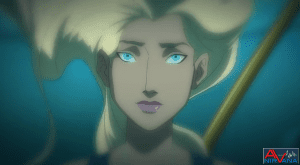 I always am a bit puzzled by the choice to put many of the WB animated DC films on 4K UHD. As to date only ONE of the newer releases films have show obvious improvement over the Blu-ray, and that seems to NOT be a problem with Warner's encode. Rather, it's an issue with the source material not having enough detail and resolution to really show any tangible benefits outside of HDR (which sadly isn't really used here that much). The Commemorative edition comes in both Blu-ray and 4K UHD, and it seems that they are using the same solid Blu-ray encode for the 1080p disc, and the UHD release looks about identical. There's some minor color boosts if you really look for it in the ocean floor arena, but this is really just a lightly warmed over look upscaled to 4K without any fine tuned adjustments. I'm actually loathe to say this as Warner does excellent work for their 4K UHD discs, but the animated WB films so far have been frustrating in their lack of upgradability over the Blu-ray. It's a solid looking disc, with great detail and good coloring.........for a Blu-ray. As a 4K disc it's just a teensy bit improved over what we've seen before, with color banding still baked into the source material. 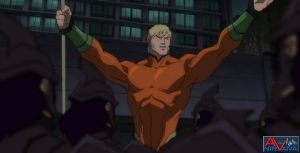 The 5.1 DTS-HD MA is, as always, is the highlight of the audio/video presentation and doesn’t hold any punches. For those wondering if it is an upgrade or similar to the older 2015 Blu-ray, then just be aware that this is the exact same 5.1 mix that has been released before, no more, no less.. A dynamic track that sparkles at every turn, Justice League: Throne of Atlantis bring the battle to the front yard with tons of power and oomph in the gas tank. The surrounds and LFE channels are firing on all four cylinders as the action blasts through the soundscape and leaves no prisoners. The dialogue is well balanced, locked up there in the center channel and well within the limits of the impressive dynamic range. There’s some great directional sounds during the latter part of the movie as the Atlantian army comes out to play with the heroes of Earth and the ray blasts from Orm’s scepter tear up the speakers as they bounce from one side of the screen to another. Definitely a solid A rated track that will leave you grinning from ear to ear.

• Aquaman: The New King (NEW featurette) – An immersive look at Arthur Curry’s evolution from guardian of the ocean to the King of Atlantis and key member of the Justice League.
• Audio Commentary (NEW) – Renowned former DC Editor and current Creative Director of Animation Mike Carlin, Creative Director of Animation, and Throne of Atlantis screenwriter Heath Corson share their insights into the legend of Aquaman.
• Scoring Atlantis: The Sound of the Deep (Featurette) - Every great film needs a great musical score. Filled with emotion, music takes us on a dynamic journey as we adventure with the hero. Throne of Atlantis takes us on that quest through the eyes of Arthur Curry.
• Robin and Nightwing Bonus Sequence – Producer James Tucker provides video commentary for this exciting bonus sequence where Robin and Nightwing join forces.
• Throne of Atlantis: 2014 New York Comic Con Panel – The entire, lively one-hour panel discussion between actor Matt Lanter, producer James Tucker, screenwriter Heath Corson, character designer Phil Bourassa and dialogue director Andrea Romano.
• Villains of the Deep (Featurette) – From Ocean Master to Black Manta to King Shark, each villain operates from his own deep sense of conviction, presenting an incredible challenge for the hero in Arthur Curry, aka Aquaman. This documentary goes into the biographical details of the villains.
• A Sneak Peek at The Death of Superman - The Death of Superman is widely considered one of the most popular stories in the Superman canon and the DCU. This sneak peek at the exciting new film discusses the story and its place in pop culture.
• A Sneak Peek at Reign of the Supermen - An exciting look at the new film which brings the epic and emotional story of a world without the Man of Steel to life.
• Bonus cartoons from the DC Comics Vault:
- Batman: The Brave and the Bold, "Aquaman's Outrageous Adventure!"
- Batman: The Brave and the Bold, "Evil Under the Sea!"
- Aquaman, "Menace of The Black Manta" and "The Rampaging Reptile-Men"
- Justice League Unlimited, "Far from Home"

​
Justice League: Throne of Atlantis is a solid entry, but still one of the weaker ones in recent history. The odd shoehorning of the rest of the Justice League into what was obviously meant to be an Aquaman standalone leaves the viewer a bit disappointed in comparison to the other movies in the universe. Still, it’s a fun little watch, and rests just under the quality of “Justice League: War” and opens up the door for some very interesting follow up adventures to come in the future. Avenues that sadly haven't been followed up in the animated world to date, but will be expounded upon in the upcoming live action Aquaman movie with Jason Momoa. I started to actually wonder why a commemorative edition was coming out for Throne of Atlantis, then it hit me. "ohhhhhhhhhhh yeah, the new live action movie is coming out soon". As an upgrade to the 2015 disc it's a bit hit or miss. There's a couple of cool commentary tracks and featurette's in the special features section, but the audio track is the same mix, and the video is only the barest of increases in visual clarity making this one a hard sell if you've already bought the film. If you haven't, then by all means the commemorative edition Blu-ray or 4K will do you just fine. Recommended as a fun watch.