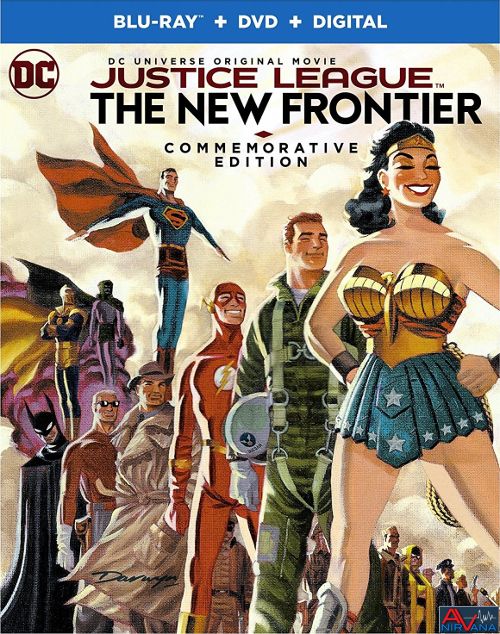 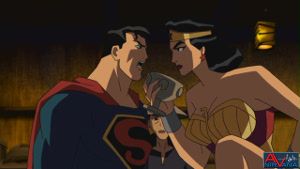 Movie
DC and Warner have been repackaging and sprucing up (ever so slightly) several of their older animated titles with Justice League live action impending, as well as to coincide with Wonder Woman hitting the big screen a while back. Most of these special editions aren’t massive upgrades from the previous versions, but those versions are usually out of print right now, and the additional re-encoding (for some) and nicer packaging makes for an appealing entry for those who missed out the first time, or just are suckers for special edition packaging. Justice League: The New Frontier was actually DC’s first animated film on Blu-ray, coming in right at the beginning of 2008, just after the format launch. As such, it was given the slightly sub par VC-1 encoding method and giving Dolby TrueHD 5.1 audio. This new edition gives us all the same extras (minus the TV episodes), but also tweaks the audio encoding into 5.1 DTS-HD MA, as well as re-encoding the VC-1 image to AVC (something I didn’t expect after Wonder Woman: The Commemorative Edition came with the same VC-1 encode as before).

Justice League: The New Frontier is a bit different than most of the newer animated films from the DC and WB collaboration. Instead of following the Bruce Timm or New 52 timeline, the film goes back even FURTHER in time, setting the film seemingly in the 80s during the cold war era. We start out with a foreboding scene narrated by the self described “Center” (voiced by Keith David), warning of impending doom and destruction on the human race, before cutting forward to a series of introductions. First we see that Superman (Kyle MacLachlan) is dealing with the aftermath of the initial Justice League falling apart. A new administration is in charge of the U.S. and the vigilante heroes have been sort of labeled as outlaws. Wonder Woman (Lucy Lawless) is sulking back on Paradise Island after coming to grips with the injustices of the modern world, and Batman is back to being the vigilante that is the nation’s most wanted criminal. The Flash (Neil Patrick Harris) is hanging up his red tights after a near miss incident that nearly kills Iris West, and Martian Manhunter (Miguel Ferrer) has Just been transported to earth by accident. Hal Jordan is still a hotshot pilot, but having to make due as a test flight operator after he comes back shell shock from the Vietnam war.

One thing they ALL have in common is the fact that they all have had villains who seemed to be mind controlled by a being that refers to itself as the center. Digging deeper than the surface, Martian Manhunter and Batman figure out that there is something to be afraid of, and it’s going to take all of their combined skills to combat this being before it eradicates mankind completely. 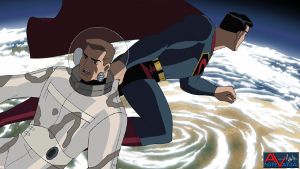 There’s a distinctly different vibe going on with The New Frontier than the rest of the Justice League films, and it’s not just due to the fact that it seems to be based off of the 70s. Retro vibe aside, it takes a different tone that is light and refreshing. Most of us are used to either one of two modes for DC. Dark and brooding with serious dramatic stories, or light and fluffy, filled to the brim with comedic moments and sarcastic dialog. The New Frontier mimics that retro “golden age” of DC comics not only in look and visual “feeling”, but in the upbeat serial drama that we used to feel from the old Superman radio dramas, or the George Reeves serials from back in the day (I still have those DVDs tucked away). There’s a patriotic and hopefully bent to the film that feels slightly dated, but also incredibly refreshing and invigorating. There’s a serious tone to the film, but its wrapped up with a bright shiny hope for the future, and a distinct lack of morose angst that so many modern superhero films are burdened with.

The film originally advertised itself as PG-13 all over the place, proud to be one of the more “adult” versions of the classic cartoons and comic characters, but in reality it’s not that wild compared to most of the New 52 stuff. There’s some blood, a couple of adult words, and that’s about it. Most of the film would fit right into the PG world of Bruce Timm’s legacy, and only slightly in the New 52’s world of darkness and violence. The animation style is very much reminiscent of a modern take on the 60s Looney Toons animation, which gives us a lot of background on where Bruce Timm got a lot of his inspiration from.

The movie also spotlights a whole host of animated superheros as well as the start studded cast to voice them. We’ve got everyone from Miguel Ferrer, Lucy Lawless, Neil Patrick Harris, David Boreanz, Brooke Shields, John Heard, Kyra Sedgwick. Keith David, and a TON of other solid actors and actresses lending their talents. In some ways it’s really cool to hear them all, but in other ways it makes the film seem a bit crowded. So much big name talent feels EVER so slightly off from the more traditional voice acting roles. The same thing is true for the story itself. The cameos and the multiple subplots makes for a lot of fun, but it also over stuffs the films 75 minute run time with a LOT of origin stories, and intersecting plot lines that bring us together for a sadly underwhelming encounter with The Center at the end of the flick. 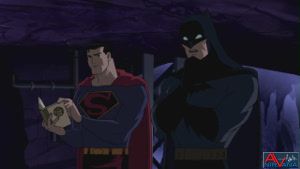 Back in 2008 The Final Frontier was considered one of the best encoded animation films out there, and many places gave it a 4.5/5 rating. However, with advances in picture quality and compression methods things change, and I would give a little bit of a lower rating. The nice thing is that unlike Wonder Woman, Warner actually went back to the VC-1 encoded film and re-encoded it in the more modern AVC package. The master appears to be the same as the film doesn’t look ALL that different, but some of the banding and crush issues that plagued the first release aren’t as prevalent. The colors are warm and cheery, with a slight watercolor look to them, and the fine detail is excellent despite the film’s minimalist animation style. Blacks are inky, and there are no major compression artifacts. Banding is still present, but it’s not bad at all, and slightly reduced from the lower bitrate VC-1 version. 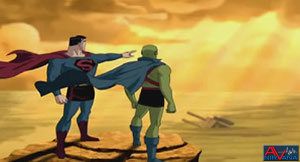 Like the video encode, Warner has repackaged the 5.1 Dolby TrueHD track (and gotten rid of the unnecessary 5.1 Dolby Digital track from the first release) and gone with the more standard 5.1 DTS-HD MA. I honestly don’t believe that there has been any tweaks or changes at all to the audio, just re-encoded with DTS-HD MA instead of Dolby TrueHD. It still sounds wildly dynamic and impressive on the surround usage, and the LFE gives forth a nice array of low end support for all of the action and adventure that goes on in the animated film. Vocals are well placed in the center channel, and the immersive nature of the comic book world is on full display. 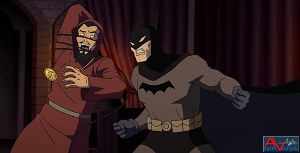 The New Frontier is a fun film, but it’s entirely too busy for its own good, which is the one downside to the animated flick. The voice acting is solid, the animation and tone is simply fantastic, but it doesn’t hold up as well as other of the DC animated universe due to it being TOO ambitious while still trying to stick to the average 1:15:00 run time that these films seem to take on. The nicety of getting a slightly better looking encode from WB is much appreciated, as the VC-1 codec was a bit dated, but the audio (even with the change of encoding wrappers) and the extras are what we had from the previous editions. The addition of DVD and Digital Copy (which is the first time the film has ever had one from a home media release) is nice, and the packaging art and slipcover look fantastic. For those of you who are into collector’s editions, there IS a steelbook version as well. All in all, since the film is out of print and going for some decent change, this new edition is just perfect for those who haven’t watched it yet. For those of us with the original 2008 release, the decision is very hard as the increase in the encode quality is slight, and the rest remains the same. Still a fun watch.