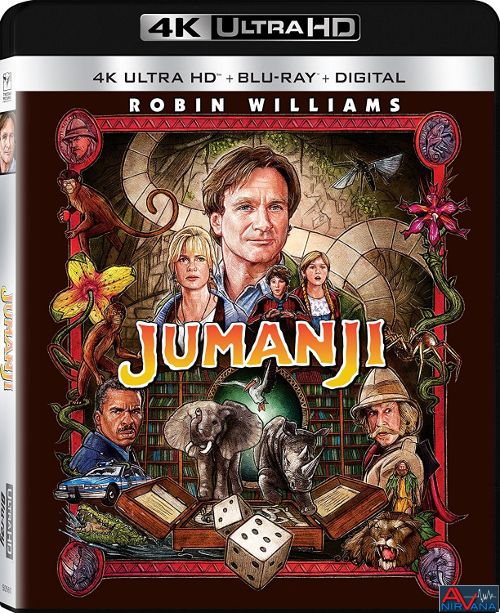 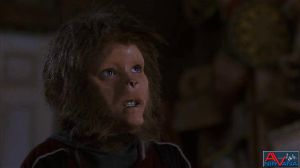 Movie
The concept of board games has been around for a long time, but the idea of supernatural board games has mostly been relegated to “evil” things like Ouija boards and the like. Back in the 1990s, there was a HUGE resurgence of board game mania among families (my family was one of them who succumbed to their allure), and they became all the rage again. New versions of Risk, Monopoly, and the like dotted every Toys-R-Us from here to Timbuktu, and someone in the film industry got the bright idea of making a movie about a board game where every move you made could end up with a real life or death situation. My high school buddies and I actually refused to go see the movie when it first came out because the idea of a movie about a BOARD GAME seemed totally ridiculous, but I decided to go see it in the $2 theater (yes, we still had those) and fell in love with the kids adventure flick (I adored Robin Williams). Over the years I’ve probably picked up most variations of the movie in their differing formats, and even got the lackluster 2011 Blu-ray that Sony put out a few years back despite the mediocre reviews. I was actually waiting for another release of the movie ever since Jumanji 2 was announced, and was SUPER excited to see the movie was getting the royal treatment, including a full remastering and a bunch of new features to enjoy. Looking back I have to say that the movie has aged a bit in the last 22 (almost 23) years, but the charm is still there, with great performances by Robin Williams and a sense of non stop action (in a PG environment) that still makes it family friendly fun.

The film opens up with an old 1800s duo of children burying a chest with fear in their eyes, and whispering the classic “whoever finds this, is cursed!” lines before us jumping ahead to 1969. There young Alan Parrish (Adam Hynn-Byrd) is getting bullied by the local scum bags, and after getting his bike taken away stumbles into a construction yard and unearths the chest that we saw in the opening few moments. Inside is a board game with the name JUMANJI etched across it. Coming home with his friend Sarah Whittle (Laura Bell Bundy), he decides to play the game, only to find out that it is MUCH more serious than he could have ever imagined. The game unleashes monsters after every move, and will not stop until the game has been completed. The only thing is, that Alan’s next move sucks him into the game leaving Sarah to scream in terror at something she can’t understand.

Once again we flash forward, but this time 26 years later to 1995 where the now dormant Parrish house is being given new owners. A young woman by the name of Nora Shepherd (Bebe Neuwirth, most famous for playing Lilith in the show Frasier) is moving in after her brother’s children become her wards. What seems like a rough start for all gets just a bit rougher when young Judy (Kirsten Dunst) and Peter (Bradley Pierce) find the board game still in the middle of play, and decide to cast their own dice roll (effectively drawing them into the nightmare that Alan is trapped in). Poof, bang bam, and Alan is back in the real world, but he’s 26 years older and barely sane. While he’s happy to be home, there’s still one little thing that needs to be completed before all of this goes back to normal. JUMANJI. 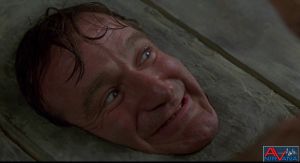 Jumanji HAS aged a bit over the years (the CGI is especially noticeable being that it was jam packed with lots of computer generated imagery and it is over 20 year old CGI at that), but the movie still remains an entertaining piece of childhood fun. What makes the film so accessible, even today, the tightrope balancing act that director Joe Johnston plays with keeping the film light and childish one moment, but dark and rather creepy the next. The cast is having a blast with their roles, but none is better than Robin Williams himself, who just revels in being able to play an adult, who’s really a kid, but kind of an adult at the same time. Kirsten Dunst is so childlike that you almost can’t see the ditzy persona that made her famous right around the early 2000s, and the inclusion of comedian David Alan Grier ads just the right amount of charm to the film.

Still, there ARE some elements of the movie that feels a bit “dated”, you might say. The film’s CGI is definitely one of them, but also Jumanji feels a bit light in the plot department now that I’m many years older. The plot is the equivalent of a kung-fu flick, with the dialog being just enough cohesion to keep the action sequences tied together as each of the dice rolls brings for another catastrophe. One the flip side, there is a little bit of subtext to the film (especially with Van Pelt being played by the same actor who plays Alan’s 1969 father. A move which highlights the fear and conflict he ad with the old man), and the ending is one of the cutest well done ways to wrap up the film that I could conceive of. So while the experience CAN feel a bit like a mixed bag at times, the charm of the actors and the uniqueness of the plot (at least for 1995) makes for a fun family film that still holds up quite well the majority of the time.

Rated PG for menacing fantasy action and some mild language

The 2011 release of Jumanji from Sony Pictures was a decent one, but nothing truly stellar. There was some shaky looking grain structure, and the overall clarity was just “meh”. The film looked decent enough, but it was not one of Sony’s finest achievements. However, the 1995 movie has been completely remastered in honor of the sequel hitting theaters, and the resulting Blu-ray and 4K releases that were put out on the 5th of December are LIGHT YEARS ahead of the 2011 release. The new remaster looks STUNNING in both Blu-ray and 4K, but this 4K UHD disc shows noticeable improvements even over the newly minted Blu-ray. The use of HDR is spectacular, and while the movie isn’t filled with neon lights and heavily saturated colors, the 35mm film shows definite color definition that the new Blu-ray can’t replicate. Blacks are deep and inky, and the 35mm film stock shows a nice layer of healthy grain over everything (with spikes during some of the indoor shots, such as just before the monsoon). Textures are well done, and show intimate details ranging from the blood on Alan’s face, down to the little bits of ooey gooey laundry detergent that Van Pelt slip and slides through in the Save-Mart. 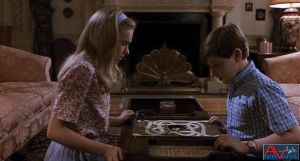 The 2011 release had a very satisfactory 5.1 DTS-HD MA track, but the upgrade to Atmos is a welcome treat, as the mix seems fresh and vibrant in ways that I hadn’t thought possible before. Jumanji has always been a high powered track with lots of loud activity, but the object based new mix is just punishing all the way around. The LFE pretty much starts with the beating of the game’s drums in the opening act and doesn’t give up until the credits roll. The stampede and roaring of big game animals tearing through the house completely pressurizes the environment, while Van Pelt’s big bore rile just reverberates with each and every shot. Dialog is still well placed and evenly balanced, but the surround use is a real joy to listen to. The ability to open up from 6 channels to over 10 widens the listening area up quite a bit, and makes the entire thing just sound more spacious and open. Directional shifting is quite common, and the little nuanced sounds (such as feet stepping on broken glass I the rear of the room) is accurate down to the most minute tone, while allowing for the dynamic range to run completely wild in this audio free for all. 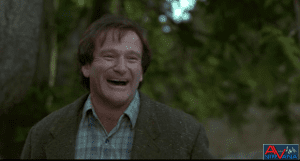 Jumanji has aged a little bit from when I was a teenager and in love with it, but the movie is still a fun little adventure film that stars Robin Williams at the height of his career. The movie is big, bold and full of action for the PG oriented crowd, and this new remaster of the film is completely worth picking up. It’s leagues ahead of the 2011 Blu-ray, and while it’s not AS large of a jump from the new remastered Blu-ray, the 4K UHD is still quite a stunning looking disc that eclipses the 1080p version quite comfortably. If you’re a fan of the movie and haven’t picked it up yet, or have the older 2011 version, then I make no bones about saying “you will be pleased with this release”. Plenty of new extras to add to the old legacy ones, making the 4K UHD set the real deal.

Thanks for the review. I agree, a fun movie to see.