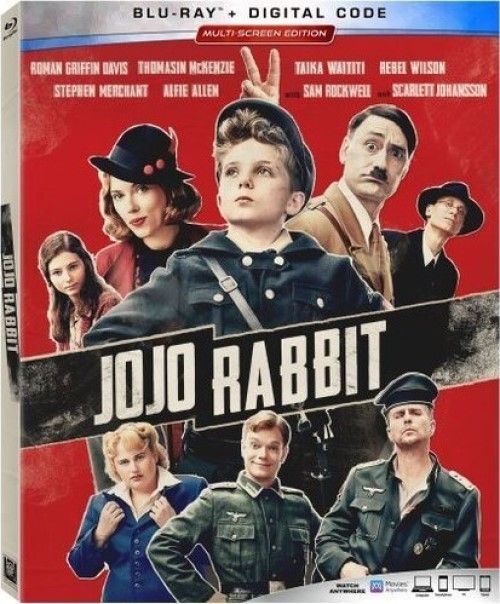 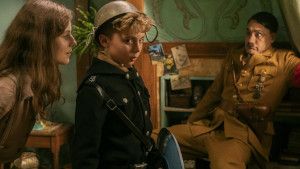 Movie
The first thing you are going to be asking yourself after watching the trailer for Taika Waititi’s Jojo Rabbit is “how are you going to make a movie comedy about Hitler?”. Sure, it’s been done before with the show Hogans Heroes, and kind of similarly played at with The Dictator, but both of those ventures dealt with dictators or actual Nazis OUTSIDE of Hitler himself. How are you going to make the mad Aryan actually humorous? Well, you do it with Taika Waititi’s trademark slapstick/droll humor blend and by making the mustached villain out to be an imaginary friend created by the mind of a 10 year old Nazi youth recruit. The movie luckily doesn’t stay completely humorous forever, slowly blending in more and more dramatic elements to the story, and easing up the in your face humor.

The film revolves around one Johannes Betlzer (Roman Griffin Davis), a 10 year old youth who is being indoctrinated into the Hitler’s youth program, and heading out for a summer of fun learning how to stab things, blow up things, and generally be a good little Nazi when he grows up. Well, Johannes is a bit of a soft kid at heart, and after he won’t kill a rabbit to show his bravado and machismo to the rest of the youths, is nicknamed “Jojo Rabbit” as a derogatory insult. Thinking that he can win back his classmate’s approval, he jumps head first into a grenade toss, ending up maiming himself accidentally.

Sent home, the youth is forced to recoup on his own with the help of his mother, Rosie (Scarlett Johansson), who dotes on her boy as much as she can while being a single mother (Jojo’s father is reportedly a deserter on the Italian front of the war). Outside of his chubby friend Yorkie, Jojo really only has one companion. An imaginary creation of his mind that comes to him in the form of his idol, Adolph Hitler. Jojo’s head Hitler is a bit more of a supportive character than reality, as Jojo’s little fantasies have turned him into his best friend. A guy who will support him and encourage the nerdy youth in becoming more like the other boys. However, Rosie has a bit of a secret of her own, which turns out to be the fact that she’s helping a Jewish girl hide from the Nazi purge during the end of the war. A secret that Jojo finds out rather quickly and one that creates a bit of a moral dilemma for the good Nazi boy.

Written, directed, and starring Taika Waititi (which he was nominated for and won awards for), Jojo Rabbit is a thoroughly engaging film. I wasn’t sure how he was going to keep the slapstick humor going, but it’s cleverly blended in with the much more serious drama surrounding the Jewish girl Elsa (Thomasin McKenzie), and comes and goes at will. While the movie is rarely “laugh out loud and roll around on the floor” funny, it is hilariously funny in a very dry and witty sort of way. If you’ve seen the mockumentary that Taika does with Jermaine Clements called What We Do in the Shadows, you’ll know exactly what I’m talking about. The movie employs well known actors like Sam Rockwell as a dour German officer who overseas the camp (he turns in a spectacularly funny performance), Rebel Wilson actually is toned down enough to where she’s genuinely funny and not annoying, and Scarlett and McKenzie both are the stars of the show. Taika himself is genuinely hilarious as Adolph Hitler, but the movie honestly gets better and better as the humor fades, and the more serious portions of the movie come to life.

While the humor is very much slapstick and Hogans Heroes’esque at times, I was surprised at how much menace and darkness was peaking around the corners of those comedic moments as well. You’re chuckling and laughing at the bumbling Nazi personas that we like to poke fun at, but there is a bite and bit of darkness behind each and every joke. Almost as if Takia is loathe to fully have fun with the Nazi’s efforts to create blind nationalism, but rather keep a certain amount of realism embedded in the film. A sort of fail safe so as not to delve too far in farcical humor, and lose sight of the seriousness of the situation.

Shot on Arria Alexa cameras and finished at 2K resolution for the master, Jojo Rabbit looks excellent on Blu-ray. It’s a varied and highly stylized film that really sparkles in it’s out of door shots. The city of Berlin and the outdoor camp that Jojo attends are lavishly colored against an earthy and dusty backdrop, with bright reds and splashes of green and blue against the dark and grim looking Nazi decorations. The indoors scenes are equally resplendent, but with a different look. The earth tones and browns come out a bit more prominent, and I noticed some black crush here and there. I also noticed that the little hidey hole for Elsa is a bit soft and less detailed, which is probably from the copious amounts of brown being displayed as well as a slightly surreal look to the camera focus. All in all, an excellent looking transfer.

The film showcases a VERY solid 5.1 DTS-HD MA track that is shared on both the Blu-ray disc and the 4K UHD disc, and is more than bombastic enough for my tastes. The film takes place out of doors many times, where there are sounds of explosions, gunfire, and roaring automobiles to flesh out the surrounds and low end frequencies, but the track is also very quiet and laid back during Jojo’s interactions with Elsa. The quiet spots are not overly long though, and the more exuberant aspects of the track come and go pleasantly, especially the score that hums with spice and energy. Dialog is still crisp and clean though, with no signs of level imbalance or crushed dynamics at all. A great sounding track for sure.

I really enjoyed Jojo Rabbit more than I thought I would. I’m a HUUUUUUUUGE fan of Taika in films like What We Do in the Shadows and his show Flight of the Concord, but lacking Jermaine Clement and being totally on his own, I wasn’t sure what to make of the trailer. All in all, it’s surprisingly funny film, and one that doesn’t try to alienate part of the audience in these politically charged times (with a call to more nationalistic standards from the Red part of American politics being criticized by the left, and the rabid left using the call of “Nazis” in place of republicans, I was afraid this would become one of those films where only half of the political spectrum would enjoy it). Instead it’s a very balanced film that decries blatant blind nationalism, and takes a look at a black spot in world history through a humorous lens. The disc is stunning to behold, and despite the lackluster extras found on the Blu-ray, is still well worth checking out as the film and audio/video specs are excellent. Great Watch.

Thank you for the review I will be watching this one.

I finally got the chance to see this movie. I greatly enjoyed it. The interesting thing is that other kid Yorki was the one that really came to the realization of what was happening in reality a lot faster than the main character Jojo.
Jojo still had his head in the clouds so to speak.. Anyways, greatly enjoyed the story and the acting. Well done.
You must log in or register to reply here.
Share:
Facebook Twitter Reddit Pinterest Tumblr WhatsApp Email Link