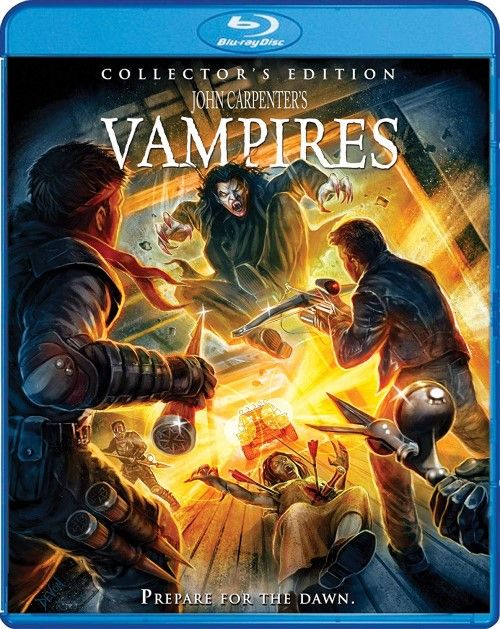 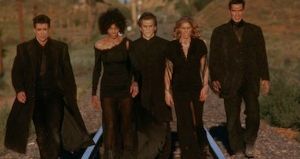 Movie
1998 hailed the release of two very different vampire movies, both of which kind of hailed the end of an era, and the beginning of a new one. Those two movies happened to be John Carpenter’s Vampires and Blade, each taking their own stab at the vampire niche, with wildly different purposes and effects. John Carpenter’s career was really winding down during the 90s, and Vampires was his last stab at making something good (as much as I love Ghost of Mars, it’s a guilty pleasure movie, and there’s very little objectively “good” about the film), and he decided to branch out from his typical sci-fi/horror roots. Watching the extras it’s discussed in depth that this really wasn’t a vampire movie per se, but rather a western with vampires in it. That’s not to say that there wasn’t a lot of gore and classic vampire tropes, but that the main focus in both story, score and tone was to create a western that incorporated John’s love of horror and vampires. Blade, on the other hand, was going towards the future of vampire movies for the next 15 years or so. High octane movies about bloodsuckers with tons of CGI, martial arts, tons of weaponry and a focus on covens of vampires as a near military force steeped in mysticism and lore. Each one has their detractors and fans, but I have to say that John Carpenter’s Vampires is one that feels nostalgically classic, while Blade is a goofy fun action time (complete with techno music and Wesley Snipes hamming it up).

Jack Crow (James Woods) is head of a ragtag band of vampire slayers who are coming into an unnamed western town to take out a nest of vampires. The Gothic mansion is a bust though, as Jack and his crew only found minion vampires at the location instead of “the master” (a head vampire of some sorts who creates and rules over the rest) that they were looking for. After wiping out all that they could find, the group is caught unawares by the master Valek (Thomas Ian Griffith), who returns to slaughter the men who wiped out his little coven. Jack and one member of his crew named Montoya (Daniel Baldwin) are the only two survivors. Well, except for one of the hookers that was brought to their room, and she has more of a purpose than just getting out of there. Valek had bitten her shortly before slaughtering the rest of the crew, and she’s now in the process of turning into a vampire. However, before she does that, there is a psychic link that is created between master and new vampires, and Jack has every intention of exploiting that link to track and find out where Valek is so that he can kill him once and for all.

Going back to the papacy who has funded him for so many years, Jack confirms what he was suspicious of. This master, Valek, is no ordinary master. He’s actually the originator of all vampires. A vampire created BY the church 600 years ago through an accidental exorcism. His powers are enormous, and he’s not just looking to feed. Valek has a mission of his own to find an ancient artifact that will not only grant him continued mortality, but also the means to get rid of their weakness to light, tipping the balance of power between the bloodsuckers and the rest of humanity. With Montoya, a vatican priest named Adam Guiteau (Tim Guinee), and the hooker Katrina (Sheryl Lee) Crow sets out to make sure Valek doesn’t complete his mission and is sent back to hell where he belongs.

Vampires gets a lot of mixed reviews I’ve noticed. I’ve never been on the hate wagon for it like many critics, but really rather enjoyed it more than even the critics who WERE favorable to it. A lot of people were taken back by the modern western setting in their vampire move, and it was kind of off putting to them. I personally really enjoy it, as the twangy score from John Carpenter mixed with the rusty and dusty gothic settings make for a very moody and intense film. James Woods really leads the entire film along with Thomas Ian Griffith, with James really just playing himself. A snarky and sarcastic jackass who makes wise cracks before hacking up the vamps.

The movie’s charm is very much one for the John Carpenter fans who love his trademark gore, as well as the Gothic moodiness that permeates the film. There’s a lot of traditional vampire lore, but Carpenter also twists the story around to really bring the creation of the vampires something less mysterious and instead of just making it a pawn of Satan like the Anne Rice style vampire legends, it goes for a more logical approach of the supernatural. The idea of vampires being an accidental creation of the church, and crafted from a botched exorcism is rather fascinating, and combined with the high amounts of gore and nastiness makes for a very fun watch. My only real complaint about the film stems from the romance between Katrina and Montoya. It comes out of nowhere and feels awkward and forced. Especially with the violence that occurs between them to begin with, only to replaced with some melodrama that just plays out awkwardly as Montoya rides off into the sunset.

Scream Factory’s video encode of Vampires looks to be using the same master that the Twilight Time edition was taken from, which isn’t a bad thing either as that was a stellar release in regards to the technical specifications, and any differences between the two encodes is purely in the realm of nitpicking and nonexistent. I compared my Twilight Time disc and after A/Bing I’m pretty sure 99% of ANY differences were a placebo effect. Artifacting is near zero, and the film’s dirty and dusty western look is preserved. Olive colors and dusty reds and earthy oranges dominated the heavily graded film, with some jaw dropping detail levels. The opening shot where James Woods and his crew are staring at the master’s house is amazing. You can see Woods’ eyes shifting behind the glasses in real time, as well as individual drops of sweat dripping down his face. This was back in the day when actual film stock was used, and while there’s a solid level of grain over the film, it’s very organic and natural feeling, giving the movie a grittier and more rough texture combined with the heavy color grading.

As with the Twilight Time release, Scream Factory releases Vampires with a 5.1 DTS-HD MA track as well as a secondary 2.0 DTS-HD MA that was down mixed for night listening. Again, like the video, the encodes are pretty much identical to the previous limited edition, and that is just fine. The audio track is exuberant and exciting as the copious amounts of bloody action scenes dominate the sound scape. The opening scene as they tear through the hive of vampires fills all 6 channels easily, and the rest of the track doesn’t hold back either. You can hear the screeching of tires in the background as Montoya rips a vampire out of the house with his car mounted cable, and the thudding and slamming of wooden stakes resonate deeply throughout the mix. Dialog is crisp and clean, and evenly balanced with the rest of the track, and incorporates some great LFE into the mix. The western/blues inspired score twangs beautifully, creating a heavily immersive feeling to the moody film, and accents the violence perfectly with a sort of calming effect.

John Carpenter’s Vampires was one of those films that marked the end of an era. It was John Carpenter’s last really solid film, and finished off the 20th century along with Blade as some of the cheesiest, but most fun, vampire movies of the 90s. Being previously released on Blu-ray from Twilight Time, I had high hopes for the release, and was not dissapointed. It’s suing the same technical specs as the TT release, but with a whole slew of next extras, plus all of the ones on the limited edition TT release as well. Not to mention new artwork and a snazzy new slipcover, and this make for a solid upgrade. If you were one of the ones that already bought the TT release then I would hesitate in picking up the Scream Factory edition unless you really want the new extras, but if you were one of the MANY people who didn’t get in on the 3,000 edition limited run from TT, then this is easily the best edition of the film to date, and a heartily recommended purchase.