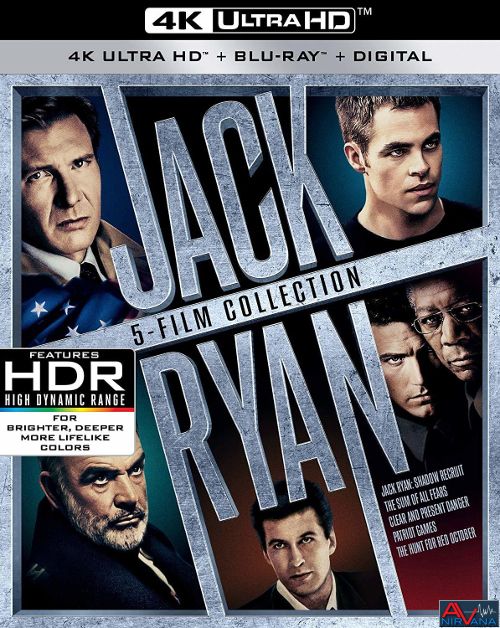 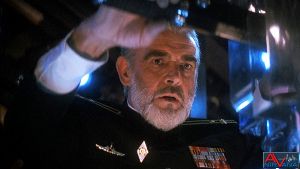 Movie
Paramount has really been on a roll lately with their big name catalog franchises. Transformers, Gladiator, Saving Private Ryan, Mission Impossible, Tomb Raider and now the entire Jack Ryan series in one big boxset. This time around I'm going to be doing something different. Instead of reviewing the boxset as a whole, I"ll be reviewing each individual film in the boxset (they're only available IN the boxset, not individually) so that you can compare and contrast the films in a more detailed manner. To wrap up the box set review, we go back to the beginning with the film that started it all.

John McTiernan was a power house action director in the 80s and 90s, but most people don’t remember that he directed The Hunt for Red October. When you think of McTiernan the first things that come to mind are Predator, Die Hard, The Last Action Hero, Rollerball. However, he branched out a bit and made a few “odd” films that were different than all the rest. 1990’s The Hunt for Red October is probably his most mature and well done film, despite the fact that some of the other films I mentioned above are more iconic in nature. Tom was in full gear during the 80s and 90s, having penned several books at that point, so his most famous one (at that time), was the perfect choice to bring the man’s work to the silver screen. It’s a fun movie, and one that just WORKS on so many levels, despite a few goofy plot points and Sean Connery losing his Russian accent every 5 minutes.

The most deadly submarine ever detected. That’s the premise behind Tom Clancy’s The Hunt for Red October. A vessel that was packed with first strike warheads, and outfitted with a super secret “caterpillar” drive that allowed the submarine to slide by silents, thus evading traditional sonar and echo location equipment making it virtually unfindable. CIA analyst Jack Ryan (Alec Baldwin) and the U.S. military learn of this ship the day that it sets sail. A day that is also marked by the Russian government informing the U.S. that the ship’s Captain, Marko Ramius (Sean Connery) has gone rogue and sailed without authorization, with a suspected target being the United states. However, Jack Ryan doesn’t think that this is the case. Using his knowledge of the man’s past, as well as his psychological profile, Ryan believes that Ramius is actually defecting to the United States, and not actually intending to fire upon us.

What happens next is a thrilling game of cat and mouse, as the undetectable submarine tries to evade the U.S. forces at all cost, while Jack Ryan, with the help of Admiral Greer (James Earl Jones) attempts to find Captain Ramius and ascertain what his actual intentions are, and hopefully stop an international incident from going into full blown warfare if Ryan’s analysis of the Russian captain’s motives are incorrect.

The Hunt for Red October was a drastic change of pace for John McTiernan. He was put on the map by two of the hottest action movies to come out of the 80s (Predator and Die Hard), but The Hunt for Red October is vastly different than either of those. Tense, action light, but full of suspense and excitement, his first film of the 1990s is a PG film that is much more family friendly and safe than the over the top violence and machismo of his previous works. What he ended up making may not be traditionally thought of as normal McTiernan fare, but it is easily the best submarine movie of the 1990s and a great movie in its own right.

The film is tense, superbly acted, and fill with everyone from Tim Curry, Sam Neill, Sean Connery, Scott Glen, Alec Baldwin, James Earl Jones, up to Daniel Davis (who was most well known for his role as Niles, the butler in The Nanny tv series). If you can overlook some of the typical over the top scenarios that McTiernan can put in his films, The Hun for Red October is a great nail biting thriller that is simply superb. Everyone is having a blast with their roles, and despite Sean Connery’s inability to keep a Russian accent for more than 5 minutes, is one of the more impressive films of the decade.

The Hunt for Red October enjoys a very nice 4K UHD encode that easily surpasses the decade old Blu-ray. It’s not going to be a shiny eye candy movie (thus the 4/5 rating), as the film is largely shot in dark submarine interiors as well as dimly lit offices that really don’t lend themselves to “bright and shiny”. Still, the film is head and shoulders above the Blu-ray, boasting some really nice textural upgrades (look at the instrument panels on the Red October, as well as minute facial details like sweat trickling down Scott Glenn’s face), the 2160p image really is the best the film has ever looked. There’s some milky black levels in some shots, but those were present in every home video format that I’ve ever seen, and the shadows actually do show quite a bit of detail. The HDR enhanced image really shines with the deep reds of the submarine lights, as well as the always problematic issue of underwater shots. I didn’t notice any real banding present in those underwater shots (underwater is probably the most notorious instances of banding in films), and the overall clarity is quite pleasing. The gray tinge that was present in Patriot Games and Clear and Present Danger is present here as well, but it seems to be the lightest of the 3 original films.

I’ve always wondered what the formula is that the bean counters at Paramount use for deciding what 4K UHD films get an upgrade to Dolby Atmos, and which ones are left with their original 5.1 mixes from the Blu-rays. While I would have liked to have seen Atmos remixes for all 5 films, I can still say with 100% honesty that the 5.1 Dolby TrueHD that is ported over from the 2008 Blu-ray is still quite an enjoyable track to listen to. The dynamics of the constrained submarine environment makes for an awesome listening experience, filled with little pings, whirring noises and the sound of sonar bouncing off of under water structures. Basil Poledouris’s orchestral score is probably my favorite part of the whole mix, and it swells with power and authority as it floods though all 6 channels with pomp and class. LFE adds punch and weight to the skirmishes, as well as mild ambient noises like hatches slamming shut and the rumble of the engines. Again, I would have LIKED to have seen a Dolby Atmos track, but the 5.1 Dolby TrueHD mix is still quite a good track after a decade.

The Hunt for Red October is easily the best of the Jack Ryan films out, and a bonafide classic to boot. Alec Baldwin put Jack Ryan on the map and it still holds up as one of the best thriller and submarine movies of the 1990s, with one of the best performances of Alec Baldwin’s long career. The film is expertly acted, perfectly scored, and one of the more fun movies from John McTiernan’s career as well. There’s a few flaws, but it still holds up 28 years later on it’s merits and is a blast to watch. The 4K UHD is a solid step up from the Blu-ray and despite carrying over the same extras and audio track as the Blu-ray is still recommended due to the obvious quality increases in the image. Definitely a great watch.

This is one of my desert island flicks... nestled somewhere between Die Hard and Crimson Tide... just a smidge behind The Right Stuff and Caddyshack.

Fantastic flick up and down, back and forth - I wish they could have given it an audio remaster, but agree the older BD release isn’t half bad. Plus - we all have up mixing when desired.

A definite buy for me!