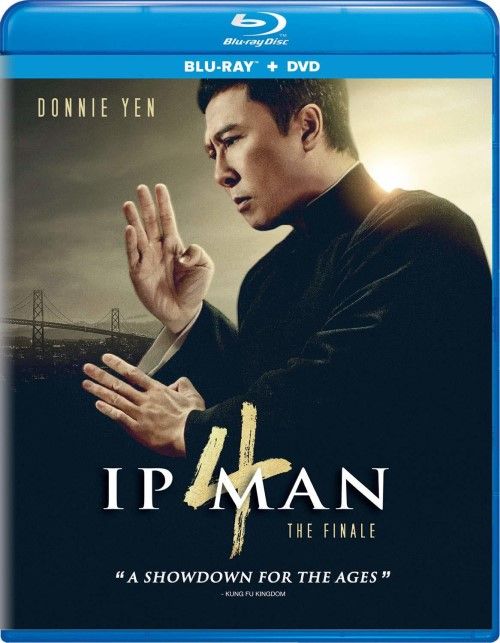 Movie
As a rabid fan of Asian cinema, and martial arts in general, I’ve been keeping track of the Ip Man films ever since they started coming out in the early 2000s. While most people knew of Bruce Lee and all of the countless followers he created, very few people in American cinema knew about the man who trained him and started him on the road to greatness. 2008’s Ip Man changed that with a HUGE bang when Donnie Yen portrayed the iconic Wing Chun master in his own film, effectively shooting him back up the super stardom ladder with it and the 2010 sequel. Donnie Yen is already an incredible Hong Kong (and American) action star with many forms of martial arts under his belt, but he actually learned Wing Chun specifically for these films, essentially using the muscle memory and copious martial arts training of his past to let him learn a new form of fighting for the camera (while Bruce Lee’s Jeet Kune Do relies heavily on the Wing Chun basics, it’s final form is truly a creation of it’s master).

I was a bit disappointed with Ip Man 3, and felt the creators were milking the franchise a bit, especially when you add in a fight between Mike Tyson and Donnie Yen. It just felt a bit cloying and only there to change things up a bit. However, it still wasn’t a bad film so I was more than excited to see Ip Man 4: The Finale, and doubly so when I saw that Scott Adkins was playing the big evil villain of the film. Scott is easily one of the most physically built and skilled acrobatic Caucasian martial artists out there today, and has been criminally under rated as a blockbuster action star. He’s paid his dues with Van Damme, Michael Jai White and countless other 80s and 90s action stars, but sadly hasn’t really been able to take off full tilt with his own fan base. That being said, any time Scott is on screen he just steals the show with his physicality, and has made him one of my favorite practitioners of the art as well as being of the best cinema fighters I’ve seen in 20 years.

Ip Man 4: The Finale really IS the finale. I won’t spoil the ending, but the creators made certain that this was the last of the franchise, giving Ip Man (Donnie Yen) a great sendoff in the final moments of the movie. Also, it was one of the most diverse of the franchise in regards to it’s fight scenes. The first 2 films had Donnie being a one man wrecking crew against everyone else, but this one splits up the fight scenes between several action stars. Bruce Lee (Danny Kwok-Kwan Chan) makes an appearance in several spots, and we get to see him do some street fighting (something he was famous for in real life) early on in the movie. Also Scott himself gets to pummel a few of the good guys throughout the movie as the film’s over the top caricature villain before he finally faces off against the inevitable Ip Man battle.

Multiple sub plots are also at play in the film. The first and foremost being that Ip Man has to travel to America to see about getting his son into an overseas school due to getting kicked out for fighting. An invitation from his pupil Bruce Lee peaks his interest, and soon he’s headed over to San Francisco’s Chinatown to check out the schools around there. However, he finds out that the grass isn’t always greener on the other side, as he comes up against a whole host of troubles. The first is that he’s not wildly received by the old Kung-Fu masters who have set up shop in Chinatown. Bruce Lee has been opening up the world of Chinese martial arts to non Chinese (back then a big no no) and they blame Ip Man for not reigning him in.

To make matters worse Ip Man needs a letter of recommendation from the Chinese Benevolent Association to get his son into a good private school (they would act as financial backing in case of non-payment by individuals), and the head of the CBA just so happens to be the head of the Kung-Fu masters who are off at him for letting Bruce Lee teach his martial arts to the masses. Simultaneously we have a build up to the ultimate end boss (martial arts movies play out like a video game in some respects). A Chinese staff sergeant in the U.S. Marines (my family’s choice for military service to be precise) wants to incorporate some of the Chinese martial arts styles into the training regiment for soldiers, but is stymied by the racist, ignorant, brutish drill sergeant Barton Geddes (Scott Adkins), who sneers at the seemingly weaker fighting style. As Ip Man tries to stick to his principles and find his son a new school, he has to battle racism, exclusion by his own kind, and eventually standing up for them all when a new threat looms on the horizon in the form of Sergeant Geddes, culminating in one of the most savage and brutal fights of the franchise.

Ip Man 4: The Finale is a good step up from the mediocre Ip Man 3 that debuted 5 years ago. The fights are more diverse, the cast allows for some better visual fights, and despite some pretty heavy jingoism, is more than a blast to watch. I noticed off the bat that the jingoism was painted pretty stinking heavy against the Americans (which I don’t have a problem with, martial arts movies THRIVE off of making caricatures out of everything, and especially when you consider that we’re seeing Americans through the lens of a Chinese filter). Scott Adkins character is so over the top that it’s like watching Colonel Guile from Street Fighter, and some of the racism against the Chinese is laid on pretty thick. It’s not untrue that they were mistreated pretty badly back then, but Chinese filter comes across as almost comicbookish if you know what I mean. Despite that, the fight scenes are spectacular and much more intimate this go around. Instead of the huge crowds of villains that Ip Man fought off in the 1st and 2nd film, it’s more one on one. The fight with Bruce and the huge Karate thug in the alley is a treat to watch, and the end fight with Scott Adkins is amazing. Adkins utilizes his extremely vicious and joint oriented hard martial arts to great affect, allowing Ip Man to be forced into using a more brutal form of his infamous Wing Chun. In fact the final fight is a complete delight when you realize that this is a literal fight with no rules and no limits on both sides. Instead of having Ip Man defeat Gunnery Sergeant Geddes with apparent ease, it’s a literal dog fight, with both sides taking MASSIVE damages before one finally wins. It’s nasty, it’s not as flowery as some of the other Ip Man battles, but it’s ridiculously satisfying. 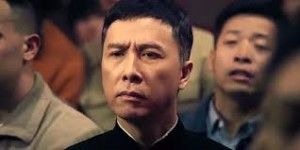 The Blu-rays 1080p image is quite the stunner, completely with the typical yellowed parchment look that is typical of the Chinese color grading. This is a very sharp and detailed picture, and despite some blatant green screen moments (some of the comical in nature they are so blatant), and the overall image is crisp as can be. Facial details are nuanced and accurate, while blacks are deep and inky, showing off all sorts of details in the backgrounds and night shots. There is a little bit of an issue with color banding off and on (a typical flaw in Well Go USA encodes), but overall it’s a very crisp and defined 2.39:1 image. 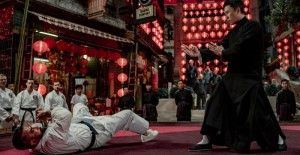 Luckily both the 4K UHD and the Blu-ray share the same audio options, with a 5.1 DTS-HD MA track in English, and the original Cantonese track in Dolby Atmos (thankfully the original language track gets the Atmos this time, unlike Ne Zha) Normally I don’t mind if people choose the English track instead of the native mix, but in this case I highly recommend the Cantonese Atmos track. Not only is it the superior track in terms of dynamics and range, the dub is also ATROCIOUS for the English track. I’m talking full on 90s level of bad. My skin was crawling just being forced to listen to it as a comparison. That being said, the Dolby Atmos track is a true stunner. It’s not flashy and wild at first ,but rather simple and pronounced. The surrounds are light and airy as Ip Man travels through San Francisco, but when the fights start the bass kicks into high gear and pummels you from all sides. Not only is the bass deep and HARD, but not once did I hear it get over cooked and so aggressive as to cause clipping. It’s clean, clear, and the whole mix feels like it’s wildly aggressive without being over cooked (a problem in action tracks). The dialog is crystal clear and evenly balanced with the fight scenes, and the surround channels can be light and airy, or aggressive and vicious depending on the need. Great mix.

For those wondering how accurate the Ip Man movies are to real life I will say this. The Ip Man movies revel in legend and “what MIGHT have happened” in regards to the man’s life. This entire film is based off of his supposed trip to America in the 1960s (most stories have him sent as a sort of “hit man” to take down Bruce Lee a peg, whose arrogance and attempts at spreading Chinese Kung-Fu to foreigners was considered unkosher), and is a fun deviation from the typical “Ip Man vs. Bruce Lee” legends. The film is fun, a bit cheesy in some parts, and while it doesn’t live up to the legendary status of the first 2 films, is a nice step up in quality from the mediocre 3rd film, and also serves as a decent send off to the character. Well Go USA’s 4K UHD is a great disc, with great video and audio, but REALLY skimpy on the extra. Definitely worth checking out, especially if you’ve watched the previous films.

Thanks for the review. I will watch this one once I watch the previous 3 movies that is on Netflix. I will start watching the first one tonight. I see there are quite a few IP films. Do I need to stick only to the Donnie Yen ones?