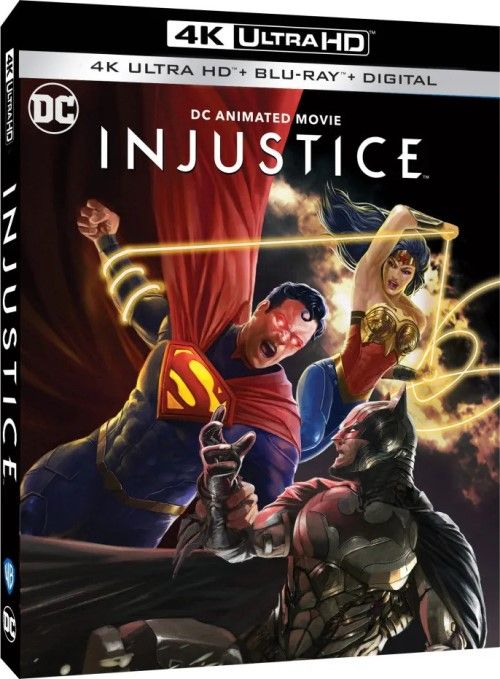 Movie
I think this is the very first time in a long time that I’ve actually been disappointed with one of the DCAU films in recent history. Not all of them are GREAT, but usually enjoyable. I was a super excited to see the infamous 5 year “Injustice” comics was being adapted for the animated screen. The comics were great (for the most part) and actually were a setup for the two video games (which even though they are fighting games, tell a fantastic dark story of Superman’s reign of terror and wrap up everything from the comics, serving as a “Part 2” to the story). My only worry was that this was not even 80 minutes with credits, and there was a LOOOOOOT of meat on the bones in the comics, let alone the games. Sadly my niggling fears were realized as Injustice is nothing but the cliffs notes of the comics, ending on the rather cliffhanger ending that leads into the video games, but with huge alterations to the stories and deaths.

The comics was legendary for being an alternate timeline story that revolved around Earth 22 and a “what if Superman went bad?” cautionary tale. In fact, you’ve probably seen the video games, or noticed that the Snydercut of the Justice League set the stage for it in the end credits scene. It’s a popular modern comic and one that is SUPER dark. In it Superman loses Lois and his unborn child to the Joker, and finally snaps. Killing the Joker is just he start of it, as Superman gives in to his superiority that he’s kept carefully under wraps, and begins meeting out justice in the world HIS way. Effectively splitting the world’s super heroes in half, Supes sets up a totalitarian regime with him at the helm, with Batman, The Green Arrow and half the world’s super heroes (and some of their villains) try to stay alive with a rogue superhero that’s effectively a god coming after them in full rage mode.

The movie is generally a cliffs notes of the comics, but with only hints of what could have been, and not enough of what happened. Some of the deaths in the animated film aren’t in the Comics, but I did appreciate them bringing back a dead Dick Grayson as Deadman (called Deadwing in the movie). However, the truncating of so much meat and potatoes to fit into a 78 minute movie REALLY hamstrings the story. Sure, we get the most popular fights from the comics, but there is SO much story left on the table. Personally I feel that DC should have made this into a two or three parter and really went for broke (kind of like the last Batman animated film), but they instead went for the quick and dirty way.

The movie itself isn’t horrible, but as an R-rated film it seems oddly out of place when you don’t have all of the backstory and inner turmoil that made Superman’s turn to the dark side seem more realistic. Also, the deaths that happen in the film are much more tumultuous in the comics and cause way more grief among the members. Everything here is just glossed over in a few seconds and we go on to the next one. As I said, not bad, decent MOVIE, but in no way a good representation of one of the better graphic novel runs in the last 10 years. Not to mention that it’s left feeling like a cliffhanger (which it is) unless they have intentions to make a part two that follows the plot of the 2 Injustice video games (which really are great games).

The 4K UHD is only moderately better than the Blu-ray that’s included in the package. I gave that a 4/5, but am forced to give the 4K UHD a 3.5/5. The animation style is truly painful to watch at times, and really feels like it was animated by the group that did the last 2 Mortal Kombat animated films. Blocky animation with weird shading and crunchy outlines. The Blu-ray looks good, and so does the 4K UHD, but said 4K UHD shows no real improvement over the Blu-ray in terms of detail levels due to the simplistic animation style. There ARE some moderate improvements in banding and black crush, but the real jump quality from 1080p to 2160p is the HDR application. The HDR tames the overly bright colors in the Blu-ray and gives them a much more tamed depth and with greater punch and saturation to them. At first glance I thought they were identical, but when popping the 4K UHD back into the player it become obvious that the HDR really added a ton of depth and richness to the colors. Butttttttttt, but outsid of that the two discs are way more similar than they are different.

Like with most of the DCAU films, the Blu-ray and the 4K UHD share the same 5.1 DTS-HD MA audio mix. It’s a solid mix as usual, with a bombastic amount of bass and surround activity due to the constant action. Since the movie acts as a cliffs notes to the comics, there is sooooo much action we really don’t have much time to wind down and listen to quieter bits. The movie is basically nonstop, balls to the walls, action with punches and super slams ripping up the low end, and the roar and swoosh of superhero and vehicles alike livening up the surrounds. Dialog is still crystal clear as expected, and while the mix isn’t overly ambitious, it is a great meat and potatoes action track.

​
Injustice is one of the few disappointments of the DCAU in modern years. Maybe I was expecting too much. Maybe I should just enjoy it for what it is, but the feeling that it is so ridiculously shortened to meet an arbitrary 80 minute max runtime like most of the DCAU films rubs me the wrong way. Especially when even my known “Injustice” knowledgeable wife felt that it was just too short. The 4K UHD disc is solid enough, but does suffer from the cheaper animation style. Decent movie, but I’d leave this one as a rental for now.