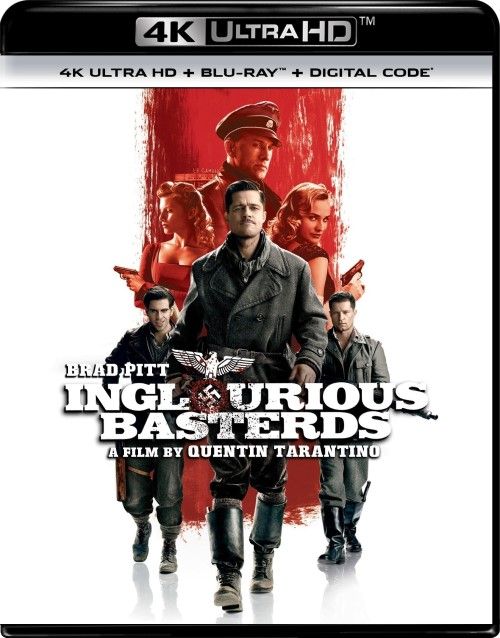 Movie
Ahh yes, Quintin Tarantino’s Inglourious Basterds. Anyone who has ever read my previous reviews knows that I am a rabid Tarantino fan. I’ve been following his career over the last 30 years ever since the release of Reservoir Dogs (little bit of controversy. I don’t find that film to be THAT good at all. In fact I’m usually bored with it) and can say that you either love the controversial director, or you hate him. Obviously I’m in the love camp and am especially fond of his post 2000 works where he implements a good bit of “what if?” esleworlds style storytelling. Django Unchained was a what if slave fantasy, Once Upon a Time...In Hollywood was a what if about the classic 70s murders, and Inglourious Basterds was more than just a homage to Enzo Castellari’s 70s gonzo film of the same name (albeit one letter’s difference in the title). Yes, you guessed it. It’s a what if elseworlds revenge film for every Jew who ever wanted to punch Hitler in the face and shoot some Nazis. It’s gory, cheesy, full of snappy dialog, and also the film that shot Christoph Waltz into stardom.

While most people of 2009 expected the movie to be a Brad Pitt film, it really it isn’t. Sure he is there chewing up the scenery with his fake southern accent while he gets him some Nazi scalps, but this is really a 3 prong story with different heroes making it an ensemble piece. The film opens up with us finding the major villain making his presence known. One SS Colonel Hans Landa (an unknown Christoph Waltz) who is hunting down Jews in the French countryside. Sadly (for him) one of his intended victims escapes and reinvents herself as a French theater owner in Paris going by the name of Emmanuele (Melanie Laurent). She gets drawn back into the chaos of World War II when a war hero named Fredrick Zoller takes a shine to her and convinces Herr Goebbels into allowing her cinema to host the latest Nazi propaganda piece with an event that will show off all the latest Nazi hierarchy in one place. Shosanna (e.g. Emmanuele) schemes a plan to draw all the Nazis into one place, then burn it to the ground.

Simultaneously the Americans have an elite team of Jewish American commandos behind enemy lines known as the “Inglourious Basterds” who are making themselves quite the thorn in the sides of the Nazi forces as guerrilla warriors. The famed Nazi hunters get a call from up high that the Brits have a plan. It seems that Shosanna’s plan to burn the Nazi leadership to the ground during the film premiere is not unique. The Brits and the Americans want to torch the place as well, and utilize the help of a German defection (played by Diane Kruger) to get the Basterds into the premiere, and subsequently blow the ever loving crap out of the Nazi leadership. Badda bing, badda boom, no more Hitler. Seems easy enough, but those kraut loving Nazis have some plans of their own, and now it’s up to some VERY ticked off Jewish commands, a revenged seeking Jewish holocaust survivor, and some luck to make sure that Hitler’s blood paints the walls of that theater.

As I said, Inglourious Basterds is a what if love story to everyone who ever wanted to punch Nazis and put a bullet in Hitler. It bares no semblance to reality outside of the fact that Hitler was in World War II, and the Allies fought the Axis powers. The rest is pure Tarantino exaggeration of epic proportions. I’ve always been a fan of the witty dialog that Tarantino is known for, but he tones it down a good bit here. Brad Pitt and Michael Fassbender chew up most of the scenery, but Christoph Waltz is an utter gem here. He’s been a minor name in European cinema since the 80s, but never broke into Hollywood. Tarantino’s casting was immaculate though, and this role was the catalyst for him becoming the Hollywood star that he is today. His grasp of carefully delivered hammy dialog turned Colonel Landa from a B-list villain to an incredibly complex man with a devious ability to hunt out people. Brad Pitt will forever be the humorous part of this movie, but Landa was simply superb as both despicable and hilarious at the same time.

The movie soon becomes more than the sum of it’s seemingly disconnected parts. The three separate story lines of American soldiers, Jewish revenge, and Nazi SS commanders culminates into an ear splitting grin of a finale that WILL plaster a huge satisfied smile over your face. The dialog is on point, Every actor is having a blast with their role, and Tarantino just revels in satirizing and mocking every aspect of the German Third Reich hierarchy (in many ways he pays homage to the WWII propaganda pieces that we utilized in the U.S. to villainize the Axis powers in a comical way). It’s a great movie if you’re a fan of Tarantino’s work, and one of my personal favorites of his recent works.

The 4K UHD disc was taken from a 2K master and then upscaled to 4K, and looks substantially better than the 2009 disc (which was a demo disc back in 2009). Part of me really wishes they had gone back to the 35mm negative and done a full 4K master for this release, but it still looks REALLY good. First thing I noticed was that the colors on the 4K are much more fine tuned. The reds are less burnished and overlay saturated to the point of orangey glow, and the yellow tinge has been subdued. The darker scenes (such as in the basement bar) are deep and inky with tons more shadow detail to enjoy. Regular textures show a decent upgrade over the old Blu-ray, but the use of HDR in the colors (as mentioned above) makes a MASSIVE difference in how the film feels. That red dress Shosanna wears near the end is so beautifully rendered that I noticed stitching and lines that weren’t visible on the Blu-ray. The disc DID have some minor crush and I noticed weird pixelation around edges in the darker shots (the bar scene once again was the most prominent for that). Otherwise, this is a solid transfer. Would I have preferred a new master from the negative with a 4K DI? Yes I would have, however this is not a case of this being a "bad disc" as a result. Just one that could have been a bit better if Universal had taken full advantage of the format with a new master

The disc recycles the 5.1 DTS-HD MA track instead of giving us an upgraded object based mix such as Atmos or DTS:X, but I will forgive them as the 5.1 mix is still a stunner of a track. The video is great, but the audio has really held up over the years with Tarantino’s brash and aggressive mixing. Gunshots and explosions ring out with deep bassy impacts, and the surrounds are just awash with activity during the violence. The tend to fade into the background when Tarantino employs his usual monologues and snappy dialog scenes, but this is one blazing powerhouse of mix when needed. The explosion near the end as Shosanna lights up the theater is just incredible with deep rich bass, and some of the best surround usage of the film as the flames lick up the sides of the building while those trapped inside scream in terror. It may not be an Atmos track, but this is one incredible 5.1 mix.

​
Inglourious Basterds is a blast of a movie that may go on a FEW minutes too long, but is purely Tarantino having a good time on film. It’s bloody, a hilarious fantasy, and filled with fun dialog and great performances. The 4K UHD is a rather substantial upgrade over the Blu-ray in the video department, even though it recycles the same 5.1 DTS-HD MA track that the Blu-ray came with back in 2009 (not a horrible thing. That was a stunner of a track), and for once the extras are found ON the 4K UHD disc instead of JUST being on the Blu-ray. Personally, a solid upgrade for fans, and a must have for 4K fanatics.

This was the first Blu-ray I bought, and I was excited for the release, though my excitement has been tempered a bit by the first reviews. I’ll likely pick it up but I’ll wait until the prices drop, perhaps to the bargain bin.

thrillcat said:
This was the first Blu-ray I bought, and I was excited for the release, though my excitement has been tempered a bit by the first reviews. I’ll likely pick it up but I’ll wait until the prices drop, perhaps to the bargain bin.
Click to expand...

It's not a perfect disc, but I've read some of the comments on other reviews and think they're over reacting a bit. It's still a very solid uptick from the Blu-ray for sure. VERY obvious with the colors and timings and use of HDR alone. I really would have loved a 4K master instead of an upscale, but I think people are freaking out a bit TOO much (IMO of course)

I think the disappointment is stemming from the fact that this was a full 35mm release and could have benefited from a new master that takes full advantage of the source rather than this being a really underwhelming 4K UHD disc.
Last edited: Oct 12, 2021
You must log in or register to reply here.
Share:
Facebook Twitter Reddit Pinterest Tumblr WhatsApp Email Link