I'm attempting to use REW to calculate inductance parameters to feed hornresp (as per the feature added in http://www.diyaudio.com/forums/subwoofers/119854-hornresp-post5404994.html), to do so I'm importing some data captured by DATS. The calculated TS params appear to be in the same region as those produced by DATS but I end up with a gigantic value for Rss in the blocked impedance params.

Any ideas what is wrong here? 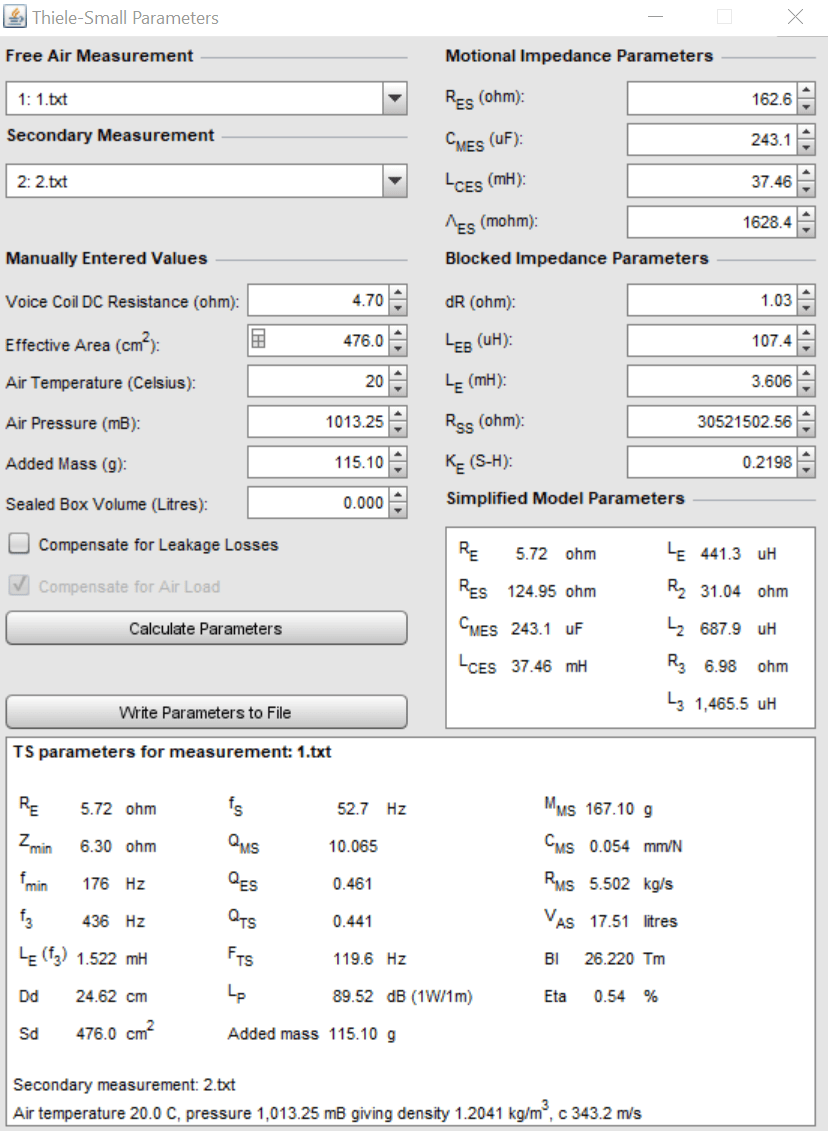 That just means there is next to no Rss component to the response. More concerning is the very poor fit to the peak for the added mass measurement, which needs a very different ΛES value to the free air measurement. The added mass is pretty high, might get better results from a smaller mass.

Poor fit in what sense? Or put another way, what constitutes a good fit?

The mass used was that required to achieve approx 25% reduction in Fs.

What does it mean to have " next to no" Rss component? Is it unusual or a sign of something wrong in some way?

A poor fit in the sense that the model is far from the measurement for the added mass:

The added mass measurement peak is also misshapen, which when I have seen it previously has been due to too much added mass. With curve fitting systems (as opposed to manual calculations) it isn't necessary to provoke such a large shift in Fs, a much smaller shift is perfectly adequate.

The very high Rss value simply means the drive doesn't exhibit the behaviour that term models, which relates to the effect of shorting rings or similar structures. It isn't unusual and isn't a sign of anything being wrong.

Ok thanks, is there any particular minimum %age shift in Fs you would recommend as adequate?

Re RSS, do you mean it's absence indicates an absence of shorting rings (or similar) or that you would expect the value to be present in the absence of such structures?

which measurement and sim are you comparing there? I'm not sure which is which from Z[ME]der or Z[TME]sim.

10% shift should be plenty. Rss is part of the model so it always has to have a value. It is in parallel with 2 other impedance elements, so when it ends up with a very large value that means it is being driven (by the fit optimisation) to a point where it has essentially no effect. The plots compare to the total impedance ZT, though in that region the main contributor is the motional impedance sitting on top of the blocked impedance.
You must log in or register to reply here.
Share:
Facebook Twitter Reddit Pinterest Tumblr WhatsApp Email Link