Ignite Your Home Theater Experience with "13 Hours" on 4K Blu-Ray! 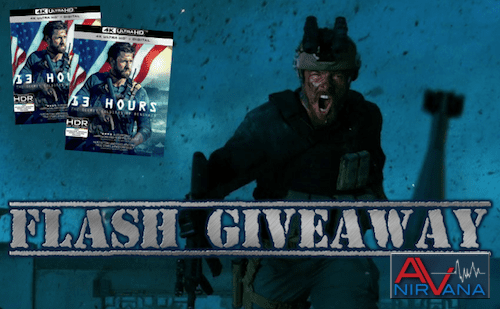 Today we're launching an epic Flash Giveaway featuring a 4K Blu-ray release that fires on all home theater cylinders. Yes folks, it's time to prepare for utter fury and chaos embedded on one of the year's best demo-worthy discs. Thanks to our great friends at Paramount, AV NIRVANA is proud to offer TWO copies of the smash-hit 13 Hours on 4K BD.

All fun and excitement aside, 13 Hours is a veritable masterpiece of film, detailing the heroism and bravery of American security forces at the site of the infamous Benghazi attack in 2012. With director Michael Bay at the controls, 13 Hours delivers you into the heat of battle. As detailed in Michael Scott's official review of the disc, the film offers "thrilling action and nonstop tension from beginning to end." While Scott says the 4K encode provides viewers with a nice uptick in presentation over the standard Blu-ray release, he lauds the film's Dolby Atmos track as "a monument to the man who loves to watch (and listen to) the world just explode." If you're a fan of insane audio, this is a MUST OWN film.

As stated above, this contest will have two winners. Both will receive one copy of 13 Hours on 4K Blu-ray, direct from Paramount.

For those of you that are currently members of AV NIRVANA, you know the entry drill. If you’re not a member, you’ll need to become one to enter the contest. Membership is 100% free… although you can certainly opt to support our site through various levels of Premium Memberships.

In order to enter the contest, simply leave a comment below and you'll gain one entry into the contest. The official – random – drawings will be held on June 21, 2019.

Best of luck to everyone that enters. And of course, the entire staff at AV NIRVANA would like to thank those members that have made AV NIRVANA their home theater discussion destination!

If you would like to become a valued supporter of our community, click here for more information. It helps us to keep the lights on and contests like this happening!

Count me in please!

Me too. Thanks Todd and AVNirvana as always!

Thanks AVNirvana for yet another giveaway!!

I'm in with excitement

Me too! Thanks for the invite and enticing offer. If I win, I promise to keep this for myself and not re-gift it.

Love these contests - count me in!
J

Meaning to see this movie but I haven't yet

Thanks AV NIRVANA team! Count me in.
L

Thanks team! Count me in too

Count me in too guys!

Pick me! Pick me!

Nice....an upgrade is always worth it..for free. Count me in!

One note: Asere is about to gain some serious contest strength! He's super close to 1,000 posts!

Nice!!!! Thank you Todd and the AV NIRVANA team for this giveaway. Can't wait to watch this one.

Congrats fellas! My crown feels a bit tarnished. I must train harder.