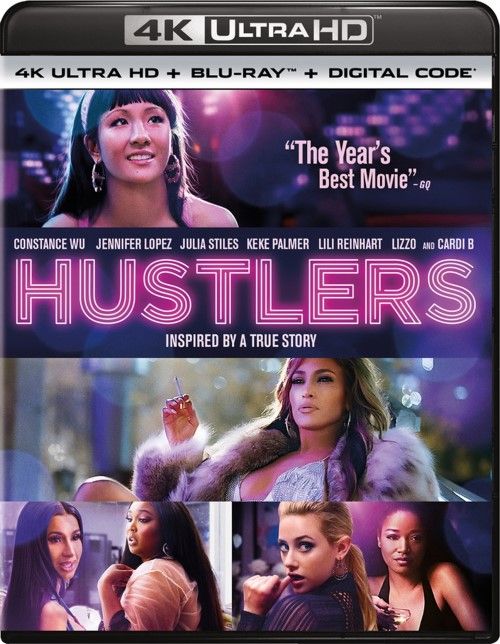 Movie
2008’s financial recession was a blow to a LOT of people. I personally know people who bought houses right at the peak of 2007 when they had all the cash in the world, only to watch as that $390,000 house turn into a $210,000 house in a matter of months. People who had jobs were suddenly working two to make ends meet, and some people struggled YEARS without getting anything but scraps of a part time gig. Director/Writer Lorene Scafaria takes a 2014 article written by Jessica Pressler about some very conniving and resourceful strippers who took matters into their own hands to make sure that the recession didn’t cripple them. I had never read the article until I found out that the movie was coming out, but once I was made aware of the premise of the film I had to dig it up and give it a read. Needless to say I was kind of shocked, appalled, and rather impressed with the real life story. It was hard hitting, a look into a different aspect of life than I had previously been exposed to, and was curious to see how Lorene Scafaria’s take on the subject matter would be. Sadly it’s not nearly as intriguing and interesting as the original article is, and plays things a bit too safe and a bit too blandly to be truly engaging, but still manages to craft a capable drama thanks to the help of Constance Wu and the ever lovely Jennifer Lopez.

Destiny (Constance Wu) is a young, naive, and raw New York stripper just trying to make ends meet. She’s taking care of her aging grandmother (who raised her after her parents dumped the child at a very young age) and barely getting by as an exotic dancer. Her moves are basic, she’s awkward at what she does, and her good looks and the Asian fetish a lot of people have were the only things keeping her from bottoming out. To make matters worse, her greedy bosses take more under the table than she can afford, leaving her with a pittance. The only person in the club that she actually has any affinity to is the club’s vivacious star, the queen bee, Ramona herself (Jennifer Lopez). Ramona has it all. The looks, the experience, the moves, and ALL the cash she could possibly handle. Seeing raw talent in her, Ramona takes Destiny under her wing and soon the two are making cash hand over fist as they tag team customers.

That is, until the 2008 recession hit and all of the big cash spenders at the club dry up. Again, making matters worse is the raw fact that Destiny gets pregnant by her live in boyfriend and is forced to quit the club and movie away in hopes of supporting her child somehow. 3 years later the poor girl comes back to the club only to find out that it’s all changed. Instead of wall street’s easy money for strippers, they’re forced to do things that a normal stripper never would have thought of doing back in the “good old days”, and it’s just too much for the young mother. That’s when Destiny runs into Ramona (who’s done quite well for herself) and is roped into a scheme that the veteran star is running. Running a 4 woman team, she and her acolytes from the club are drugging and luring in men from around the city, using their drugged up status to rack up enormous bills, and take a cut of the action as well. Soon they’re rolling in wealth, and glamour, until the inevitable other shoe drops. Leaving the women with a legal scandal and the lives they’ve ruined come home to roost.
.

Honestly, the premise and basic story line for Hustlers is rather fascinating. Strippers are usually seen as the “dregs” of society by the middle class, or glorified prostitutes by the upper class. As such they’re kind of ostracized by most unless they work at a swanky club in an upscale city, and I really liked the idea of the downtrodden turning the tables on the upper class who viewed them as a commodity to be used and discarded. The problem with the film is that Lorene Scafaria is a bit too “paint by the numbers” with her directing and writing style. The movie just feels like it takes the highlights from the article, fleshs them out on screen, and then moves on to the next one. Also, it’s very obvious that the events were just “inspired” form the original story, as many of the scenes that unfold are pure fantasy, as are some of the relationships between the women.

The saving grace of the movie that actually makes it rather solid is the excellent acting from Constance Wu and Jennifer Lopez (seriously? J-Lo is FIFTY years old as of 2019 and she looks this good? Wowza). J-lo isn’t a mind blowing actress, but she plays the part of the cold, calculating and absolutely gorgeously confident ringleader of the group of hustlers. Constance Wu is fragile, confident, and yet seemingly innocent in the whole thing, and it’s this dichotomy of character that makes her interesting to watch. The simple fact that the two characters mesh so well on screen makes their journey actually worthwhile despite the overly simplistic plot and blatantly obvious conclusion.

Woah. I wasn’t expecting an upgrade this big. The Blu-ray for Hustlers was about as pristine as I’ve seen on Blu-ray, but this 4k UHD disc is a rather large jump over it’s 1080p counterpart. The film was actually given a native 4K master, and the end results are rather stunning, with some rather large textural upgrades over the Blu-ray. Colors are deeper and richer due to the use of HDR (look at the flash club costumes for one thing), and the black levels deeper and richer. Textural backdrops and intimate clothing details are startlingly clear and nuanced, and I really loved the raw and organic feel of the film’s picture. The Blu-ray looked very “digital” in nature, but this 4k UHD disc actually looks closer to film. It’s sharper, cleaner, and more real looking than I ever expected it to be, and is one of the standout 4K discs I’ve seen recently.

The film comes with a robust and exciting Atmos track that really keeps the pop and R&B music at the center of it’s focus. The music flows from all angles, bringing down heavy club beats, as well as light and airy moments as the girls celebrate their newfound wealth. Dialog is always cleanly replicated in the front of the room, and the surrounds get plenty of activity with the score, as well as some more traditional “fun” in the form of cars roaring around New York, screaming and yelling of the crowded club, and various locations that add some surround spice to the mix. Overheads are used judiciously, and without a ton of discrete effects. Most of the time they are utilized to open up the music a bit more, and add some spaciousness to the club setting rather than calling attention to themselves. Bass is tight and punchy, adding a lot of weight to the score and blends seamlessly with the rest of the mix.

Hustlers is a pretty basic “true story” drama that paints things by the numbers, but is a movie that really survives by it’s cast. Especially Jennifer Lopez who turns in a great performance, truly embracing the highs and the lows of Ramona as she turns the pole into a weapon to be used against those who took advantage of them for years. It was also really nice to see Julia Stiles play the journalist who bookends the film’s narrative, as she has been missing in action for years (ever since the 3rd Bourne movie if I remember correctly). The 4K UHD is absolutely stunning on it’s technical merits, giving us picture perfect video, fantastic audio, BUT only a single special feature to pad out of the very anemic extras section. All in all, my recommendation is that it makes an interesting rental, but does little to elevate it past many other “true life crime stories” that are out there.