How To Train Your Dragon: The Hidden World - Blu-ray Review

How To Train Your Dragon: The Hidden World 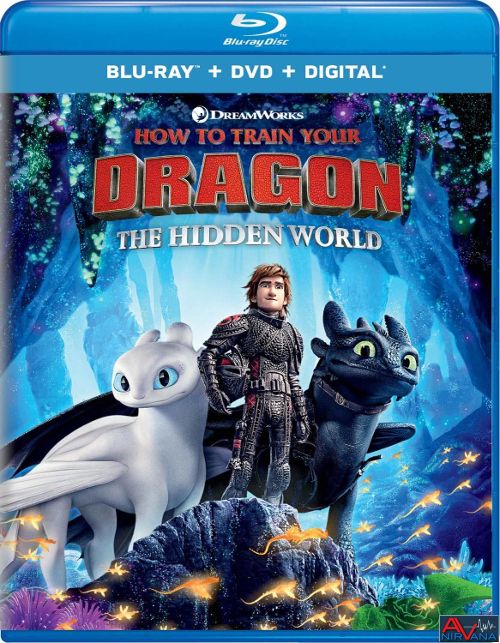 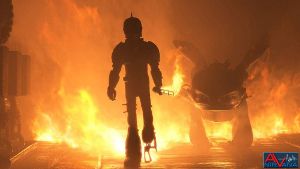 Movie
2010’s How To Train Your Dragon was kind of a turning point for Dreamworks studios. At that point in time they were still considered second fiddle to the big animation studios like Pixar/Disney and the like, even though they had a really long and varied history with animated titles. Usually they were considered “very good” in the story telling department, but never on the epic levels that Disney/Pixar dominated for multiple decades. That is until 2010 when How To Train Your Dragon just came from left field land shot them into superstardom. The animated flick was a slam dunk success, and proved that Dreamworks could hang with the big boys. 4 years later they followed it up with a sequel that was bigger, bolder, and even BETTER (if you can imagine that, since I gave the first film a 4.5/5 rating) than it’s predecessor. We’ve all been hoping for a followup film, and while we were satiated by the TV show, and the digital shorts, it’s been 5 years in the making for director Dean DeBlois to wrap up the story that he started nearly a decade ago.

It’s been a few years since Hiccup (Jay Baruchel) defeated the vicious barbarian Drago and his dragon army. However, things have changed due to the sucker punch death that happened in the previous film. His mother (Cate Blanchett) is back at his side, but with the loss of his father Stoic (Gerard Butler) Hiccup is having to learn to lead his brethren by sheer will power. Berk is now fully functional as a Dragon haven, and Hiccup, his fiancee Astrid (America Ferrera) and his friends Tuffnut (Justin Rupple, replacing T.J. Miller), Ruffnut (Kristen Wiig), Snotlout (Jonah Hill) and Fishlegs (Christopher Mintz-Plasse) all work together to free the remaining dragons in the Viking community from their oppressors. However, their world is turned upside down by the inclusion of an ancient enemy. The warlords of the other Viking communities are annoyed at the Berkians for SAVING the dragons instead of killing or controlling them, and bring back Grimmel (F. Murray Abraham), the original dragon hunter who was responsible for wiping out all the Night Fury’s except for Toothless.

Using a female Night Fury as bait, Grimmel beings to worm his way into the Berkian village, slowly but surely separating the wounded Night Fury from Hiccup, until he can strike. Realizing that he might have to rely on himself and his friends instead of just Toothless, Hiccup thinks of the only escape plan he can make that keeps everyone together. Find the fabled “Hidden World” where Dragons came from, and escape off into the sunset to live happily ever after with their precious dragons. Running turns out to be futile as Grimmel is relentless, and soon the dragon riders of Berk are faced with an impossible decision to make. Continuing on to a world that may not be theirs, or saying goodbye to their friends and making a stand as humans.

How to Train Your Dragon: The Hidden World brings the story back full circle. At the beginning of the movie the vikings of Berk was self sufficient and reliant on themselves, but with the inclusion of Toothless and the ideology of Hiccup they were able to become something greater with the dragons by their side. The 2nd movie expounded upon that, giving us higher stakes and taking some MASSIVE risks (which turned out to be a good thing, as the 2nd film was the best in the series due to those high stakes risks that DeBlois took with the story), expanding the influence of the dragons even more. The third film brings that story full circle, drawing upon themes of maturity and growing up, and the changes that comes with growing up. Kind of like Ralph Breaks the Internet where they TRIED to really push the sobering tale of friends moving on, The Hidden World just sucker punches the audience with the sadness of friends needing to go to different places while still remaining friends.

Although this is a fantastic story, and a great ending to the series, it unfortunately is the weakest of the series for a few reasons. The first is the villain Grimmel. After the first movie’s dealings with Stoic the great, and the insanely dark and evil Drago from the 2nd movie, Grimmel just feels a bit tame. He’s never really set up as a true threat, and his end battle feels a bit weaker as a result. The second is due to some mild preachyness about humans not deserving dragons (you’ll know it when you see the ending). The film works, but it doesn’t hit nearly as hard as the previous 2 films, AND it doesn’t really take any risks. You know the ending before the film is a quarter of the way through it, and DeBlois kind of plays it safe with the story. It doesn’t take nearly the risks of the 2nd movie (that movie didn’t pull punches when it came to emotional scenes, or ripping characters away). It’s still a fun movie, but The Hidden World is just a bit tamer than it’s predecessors, and that sort of robs it of some of the emotional power that the series is known for.

Rated PG for adventure action and some mild rude humor 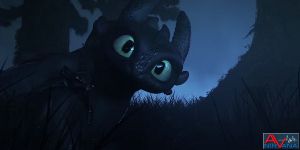 5/5 right. Did you expect anything less from a day and date Dreamworks title? The 2.39:1 AVC encoded Blu-ray is simply demo material eye candy from beginning to end, and dazzles with bright and shiny colors. This is probably the most vibrant of the three films, as the locations change from Berk, to the sky, to the underground chasms of “The Hidden World” of the dragons throughout the film. That underground cavern is jaw dropping with it’s quart and crystals reflecting off of the ambient light, as is the bright and green fields of the dragon rider’s new home after being chased off Berk. The blacks are deep and inky, with the underground cavern being the “murkiest”, but still showing off tons and tons of shadow detail. In the underground cavern as Hiccup flies in you can see some of the SLIGHTEST effects of banding around the characters, and that banding returns up in the clouds when Toothless and his girlfriend are chasing each other. However, it’s never more than a small flicker and not enough for me to justify knocking anything off the score. The colors are soooooooooo deeply saturated with shades of green, blue, red and the orange of flames alternating throughout the film. Every line, every crease, ever scale on Toothless’s body is immaculately rendered, leaving the viewer with the satisfaction of knowing this is digital perfection.

The Hidden World is distributed by Universal instead of Fox like the first two, and that means that the Dolby Atmos track that they prepared is on BOTH the 4K UHD disc and this Blu-ray (something Fox gimps on the Blu-ray). For those of you who remember, How to Train Your Dragon carried a reference level audio track with jaw dropping bass that literally would stress test any subwoofer system you put it on. Then came the 2nd film which had as good of an audio track, except that the sound designer felt the original film’s mix was too overpowering, and dampened the dynamic range by dropping the decibel level of the 7.1 mix’s LFE channel a full 12 Dbs. This Atmos track seems to give me suspicion that they realized they went too far with the LFE drop, and it’s squarely in the middle this time. The LFE is deep, throaty, heavy, and pretty aggressive, and firmly in the middle between the first and second film (meaning it’s not going to make your poor sub drivers cry in agony like the first, but they get a LOT more power than the 2nd movie gave to the LFE channel). The Dolby Atmos upgrade is also fantastic, allowing the sky battles and travel of the dragons to really encompass the listener with the surrounds and overheads. The swooshing of Toothless and his little girlfriend makes for some great directional shifts, and the end battle with the crackling of flames, and the swooshing of dragons really puts you right into the heart of it. Dialog is crisp and clean, and the film’s dynamic range is quite spacious. Overall, this is fantastic track that really is a treat to listen to.

• Audio Commentary by Writer/Director Dean DeBlois, Producer Bradford Lewis and Head of Character Animation Simon Otto
• Alternate Opening with Intro by Writer/Director Dean DeBlois
• DreamWorks Shorts:
- Bilby – Directed by Liron Topaz, Pierre Perifel and JP Sans; produced by Jeff Hermann and Kelly Cooney Cilella. Threatened daily by the deadly residents and harsh environment of Australia's Outback, a lonesome Bilby finds himself an unwitting protector, and unexpected friend, to a helpless (and quite adorable) baby bird.
- Bird Karma – Directed by William Salazar and produced by Jeff Hermann, the beautifully artistic 2D short film Bird Karma tells a delightfully lyrical and fully unexpected tale of a long-legged bird's journey of blissful joy, inescapable greed and the accidental discovery of the consequences when too much is not enough.
• Deleted Scenes with Intros by Writer/Director Dean DeBlois
• How to Voice Your Viking – Go behind the scenes with the cast as they record the Viking voices of HOW TO TRAIN YOUR DRAGON: THE HIDDEN WORLD.
• Creating an Epic Dragon Tale – Discover what filmmakers learned while crafting this epic dragon trilogy.
• How I Learned from Dragons – The diverse cast of characters reveal why they think the dragon trilogy is so special.
• Brave Wilderness Presents: Nature + Dragons = Awesome – Join Coyote Peterson, host of Brave Wilderness, as he explores what it takes to make the dragon's characters come to life.
• The Dragon Sheep Chronicles – Protecting sheep from the dragons of Berk is no easy task but Hiccup has a plan.
• A Deck of Dragons – Observe four new dragons as Fishlegs unveils his original deck of dragon trading cards.
• Growing Up with Dragons – After years of being with these characters, hear the lasting effects of the dragon trilogy from the filmmaker's perspective.
• The Evolving Character Design of Dragons – Cast and crew reveal what it was like to evolve not only the characters of HOW TO TRAIN YOUR DRAGON: THE HIDDEN WORLD, but themselves as well.
• Drawing Dragons – Get a glimpse of what goes in to designing a DreamWorks dragon.
• Epic Villain – A different kind of villain, Grimmel brings great challenges to the village of Berk. Go behind the scenes as filmmakers breakdown this epic character.
• Astrid's Whole Dragon Trilogy in 60 Seconds – Hold on tight as Astrid sums up the whole dragon trilogy in a legendary 60 seconds.
• Welcome to New Berk – With Hiccup as your guide, get a firsthand look at the updated Viking village of New Berk.

​
How To Train Your Dragon: The Hidden World is a great (though not perfect) wrap up for the series that Dean DeBlois has helmed the last nine years or so. While it is not AS great as the first two films, The Hidden World is not far behind them and has a tear jerker of an ending that had me really wanting to rewatch the trilogy from beginning to end. The themes of moving on and growing up were fantastically done, and Dreamwork’s legendary attention to audio and video makes the Blu-ray an absolute stunner on the technical front. Add in a huge host of extras (which is a welcome relief in this day and age of meager extras) and the disc is well worth checking out for casual fans, and good buy for fans.