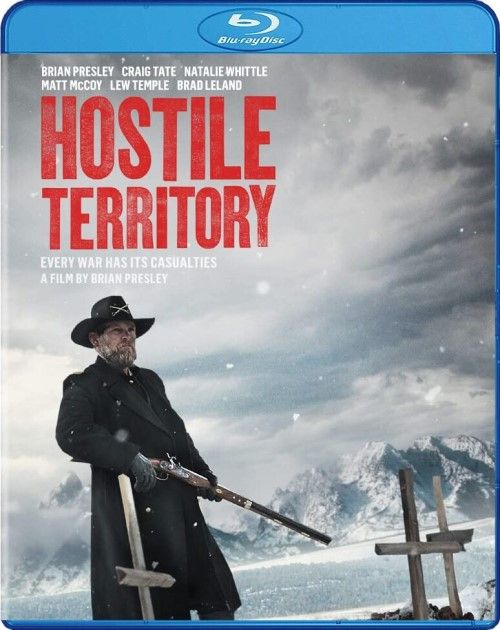 Movie
Regional non Hollywood films are always a bit hit or miss for me. I understand that Hollywood has become bloated, cliched, and pumps out cookie cutter films by the gallon, but there is a sense of stability and “quality” of production that is not nearly so adhered to in indie film making. That being said, there are many an indie production that is an incredible watch, and allows us to take a view outside of the typical Hollywood tropes and lenses. Hostile Territory is just such an attempt by writer/director/star Brian Presley.

Set in post Civil War America, the film narrates to us how Union officer Jack Calgrove (Presley) has actually been a POW for several years, and now that the war is over he and his fellow captured Union Jack’s are on their way back to civilized society. However, Jack soon finds out that this world has come crashing down. His wife Molly died of Tuberculosis after he was pronounced dead as a war time casualty, and his children were shipped off to Missouri on an orphan train to stay with his son Phillip. However, Missouri was basically hostile territory for them, as it was one of the confederate states that Calgrove had fought against, and fraught with rogue Indians, outlaws, carpetbaggers. Now it’s a race against time for Jack to track down the train before his children succumb to any one of the dangers out there.

Hostile Territory feels in many ways like a classic western. It’s your classic hardened hero on a quest to save his family in a time of uncertainty. It’s a story of family, sacrifice, and putting yourself on the line and pushing yourself to the limits to protect what is yours. However, it’s weirdly done with a sort of modern gaze and temperament. There was many a time where I truly felt most of the actors were more at home in our time period than what they were trying to portray. It’s not horribly so, but just enough that they felt awkward and slightly out of place. Sure, the movie goes into the classic cowboys and Indians type of battles, but once again, the outfits and the temperaments just feel so much more modern.

The production and costuming ARE budget, and that is one thing I’m sort of willing to overlook. This is a budget indie film and they just don’t have the resources to make things look and feel “perfect”. It’s, once again, not a horrible thing, just something that may feel out of place for viewers. The movie itself tries to be a good classic western with a modern revisionist twist, but personally I couldn’t overlook the stodgy acting and the cheap story, despite the very obvious enthusiasm and passion by everyone involved.

The 2.39:1 AVC encoded transfer looks pretty good for a budget release. The film is obviously shot digitally, but I couldn’t find a whole lot of information on the actual resolution of the master or the filming cameras. I would naturally assume a 2K master based upon the low budget, but if anyone has any other info I’d be glad to update the review.

The colors are a bit on the cool side, with a heavy blue filter for many of the scenes, only to be replaced with a neutral looking one later on. Colors are crisp and well saturated, and outside of the film just being slightly soft with some digital noise swarms that crop up now and again, I’d say it’s a very admirable transfer. The blacks are actually one of the best part of the encode, with deep and inky shadows and no major crush to be seen.

Well Go USA gives the disc a higher bitrate Dolby Digital 2.0 downmix as well as a lossless 5.1 DTS-HD MA track to enjoy. The 5.1 mix is just what I would expect for a low budget indie western. It’s crisp and clean on the vocals, it has good surround representation (the gunfight with the natives near the end makes great use of the sound stage), but the bass is fairly mild and the track just doesn’t really stretch it’s legs FULLY, if you know what I mean. Technically it checks off quite a few check marks of quality, but due to budget constraints and stylistic choices it’s not going to be one you use to show off your home cinema.

Hostile Territory isn’t a bad indie western. It’s just so rough and raw that you may have to really LOOK for that diamond midst all that rough. The Blu-ray from Well Go USA is pretty solid, with good video and audio, but negligible extras like we would expect. Decent rental, but that’s about all in my humble opinion.