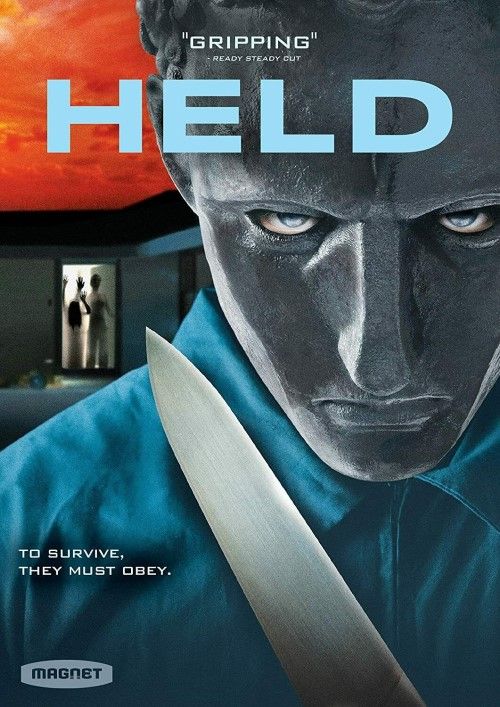 Movie
I should have known from the very start that Held was going to be one of “those” films, but after watching it I wish I had taken advantage of the little warning bell in my head saying “this isn’t going to be a good film Michael!”. Held is written and starred with Jill Awbrey, who blatantly states that this is a “#MeToo” film (as is the case with a lot of new movies) and that she had crafted the movie from her anger and frustration over the ideas of misogyny and male dominance. A fine enough underpinning for a terror thriller, but her movie comes across as incredibly sloppy and hilariously mix mashed with her genres.

Husbands and wives have been having problems for as long as human beings have been alive. It’s kind of a common thing due to human nature, so hashing out your problems is a part of having a relationship. Sometimes it’s as simple as your spouse not pulling their weight in the basic chores, and sometimes it’s a lot more serious. Either way, it requires work and many times some relaxation time together to start getting back into the groove of things. Such is the case Emma (Jill Awbrey) and Henry (Bart Johnson) who are going through a rough patch of their own. Emma apparently had an extramarital affair and the couple are trying to patch things up with a weekend getaway to a time share for their anniversary. Emma heads out to the middle of nowhere suite (already a red flag in a known horror movie) where she’s sort of made uncomfortable by the foreign cab driver (a red herring by the way, an a very sloppy one at that). It’s obvious she’s nervous about the weekend, but made even MORE nervous when her husband joins her.

The two are kind of delicately trying to make it work, but awkwardly stumbling into each other (emotionally speaking). However, their little weekend gets flipped upside down when Emma wakes up to find herself dressed in a very conservative night gown, and neither of the two can find their clothes. To make matters worse their car keys are gone and the second they try to leave the duo find out that they’ve had sonic devices implanted behind their ears that send a sonic shock if they try to leave the invisible barriers set up around the home. A mysterious voice starts issue commands, claiming that the two will make it out alive if all they do is “obey”. It starts out simple enough, but soon it’s obvious that there is something eerily ominous and patriarchal about the whole thing as the disembodied voice starts to shape and mold their behaviors to that of the stereotypical 1950s nuclear family of old. As Emma and Henry try to escape, the little clues and hints start to lead them down a path that neither of them may ever come back from the same.

The first maybe 45 minutes of the movie aren’t actually half bad. It’s your typical home invasion, mystery box thriller where two people are caught in a maze/puzzle and have to find their way out alive. The very obvious hints at male dominance with the disembodied voice had me suspicious where Jill Awbrey was taking the movie, and while I had a few ideas about where it was going, the “twist” that changes the movie from “thriller” to “Stepford Wives” had me rolling on the floor. I’m not going to spoil the twist, but if you watch the 45 to an hour prior to that point, it’s really no surprise. What really surprised me was how hilariously over the top the change of pace was, and how comic book ish the real “villain” turned out to be.

The film is a very ANGRY film, and you can feel the frustration and rage coming out of every poor from Awbrey (I have a sneaking suspicion that her own experiences with #MeToo may have been the driving force for the creation of Held). An admirable trait for a horror/thriller about this subject matter, but what makes the film fail SOOOO very badly is not the subject matter, but rather the implementation. The movie is acted very poorly, to the point where I started chuckling to myself that this was a Hallmark movie, if Hallmark did horror films (btw, Bart Johnson actually has several Hallmark movies under his belt, so my sensation of being a Hallmark film was a little closer to reality than I expected). Not to mention the overly hilarious plot twist that comes at the 2/3rds point in the movie. I literally sat back and said to myself “No way, they’re actually doing this?” when it came about. Simply put, it just didn’t work.


Rating:
Rated R by the MPAA

Yikes, I know it’s been a while since I’ve watched a DVD on my big screen, but this MPEG2 transfer doesn’t exactly look too hot. There’s a lot of digital noise in the dim picture, and haloing and artifacts abound. You can see halos around people, title screens, and general items in the house, and the swarming of digital noise and smeared detail levels got really old, really fast. I mean, outside of those fairly nasty issue the picture looks ok. Brightly lit areas are solid enough, and detail levels are ok, but blacks are crushed and swarm with said noise, and the general artifacting of the transfer left me rather turned off. Decent enough as I’ve seen worse, but definitely not what you would expect from a modern DVD transfer

The audio was probably the best part of the whole package. It’s not SUPERB, but it is definitely head and shoulders over the movie and the video sections, that’s for sure. It’s got some very solid bass for the tense score, and dialog is well placed up front. It’s not super duper active in the surrounds, but there’s definitely enough to get the job done. An all around decent, if rather budget track.

Held had potential, and I actually kind of liked the first 2 acts. It was pretty rote and typical of thrillers like these (find out who’s doing this to you, escape the traps, and turn the table on the villain) but it was SOOOO poorly implemented that it taints most of the film. Awbrey is ok as Emma, but the over the top references to overly cheesy machismo cliches got annoying after a while, and the “Stepford Wives” twist was just painful to watch. I HIGHLY recommend watching Promising Young Woman if you want to watch a MUCH better adaptation of the same thematic material. The DVD that I was given to review was pretty low budget too, as it has no scene selections or audio sections, but rather a list of extras and a “play” button. Audio and video are really nothing to write home about either, so I’ll give this one a solid thumbs down.

Creepy cover art. Too bad it will NEVER see my home theater room....