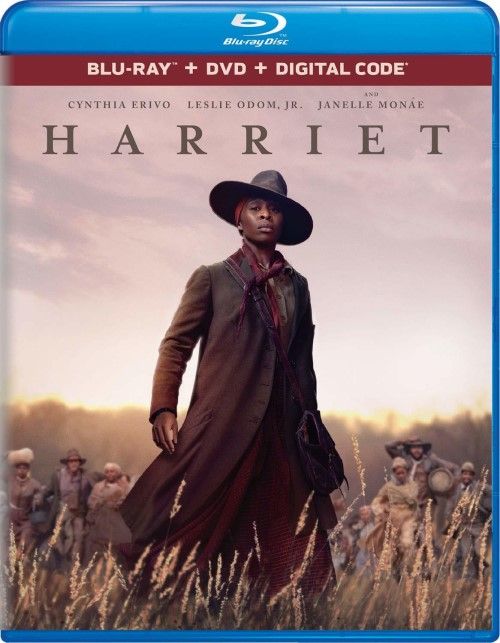 Movie
The story of Harriet Tubman has become one of the key components of our understanding of the of the Underground Railroad back in slave times. There are actually many historic figures who gave their lives, their time, and their money to free the African American men and women held in captivity during the precursor to the Civil War, but Harriet Tubman is the face of the movement if you will. She was even considered for replacing Andrew Jackson on the 20 dollar bill recently, and was a one of the figures that I remember the most when studying the Underground Railroad in grade school. Harriet sort of flew under the radar for me when it was first announced, and even though I was looking forward to it due to the subject matter, I didn’t even see it hit theaters in my perusings. Only after Cynthia Erivo was nominated for an academy award for her portrayal of the titular character did I realize that it had even come out, which made me slightly nervous about the quality of the film. No press, no real word of mouth, just a nomination for best actress. Luckily those fears are put to rest, as Harriet is a very good film that had Cynthia earning that nomination of best actress for sure.

“Minty” Ross (Cynthia Erivo) is a slave who has married a freed black man by the name of John Tubman (Zackary Momoh), and actually has a legally binding contract from her owner’s ancestors giving her her freedom, only for her current owner to deny her that right. Crying out to God to take her master from her, Minty realizes that the only solution for her is to make the run to the North and gain her freedom when her owner’s son Gideon (Joe Alwyn) decides to sell her, separating her from her family and her freed husband. Making the trip alone, Minty is presumed dead after a near miss incident with the slave hunters, only for her to make her way up to Philadelphia and the Anti-slavery Society, where she hooks up with William Still (Leslie Odom Jr.) and Marie Buchanon (Janelle Monae) who help her gain her footing as a free woman in the North.

However, Minty is not done yet. She has family back home, and a burden on her heart to help others like she was helped. Going back home under forged documents she attempts to free her family, and actually succeeds against the odds. Realizing that she can do more than just free one or two slaves, Minty dons the name of Harriet, as well as her husband’s name of Tubman, and becomes a full blown “conductor” on the gigantic subversive movement known as the Underground Railroad. She is soon dubbed as “Moses” for her efforts, and becomes one of the most hated conductors in the South. Once her identity is known, Gideon continues a relentless assault on finding her, especially when the fugitive slave act is passed (a law allowing southerners to come North and claim their escaped “property”), only for him to be thwarted by every turn.

Harriet Tubman has become legend over the years, and the film just solidifies that legendary status. Without trying to take ANYTHING away from her, I will say that her legendary status was the work of many people supporting her as “Moses”, and was a massive group effort, but Tubman’s name has been solidified as the face of the Underground Railroad movement for a reason. She did more conductor runs than any other conductor at the time, traveling hundreds upon hundreds of times into enemy territory to rescue people without though of her own life. Cynthia Erivo does an absolutely fantastic job as Minty/Harriet/Moses, portraying her as a simple woman with strong convictions. Her strength is given to her by her iron clad faith, as well as a great supporting cast of actors/actresses who allow her to continue on in her mission as well.

One of the biggest boons to the film is that it sticks to the central theme of the Underground Railroad without changing direction, infusing multiple side stories, or trying to gussy it up. This is a story about Harriet Tubman and her mission to free slaves. Too many other historical biopics (ish) try to make it more interesting by throwing in a lot of stuff that never happened just to make a good story. Harriet is much more straight forward and simple thematically, and that actually works to the film’s benefit. The raw performance from Erivo is riveting though, giving it the energy and momentum the film needs. While it’s not a perfect film (the non deviating approach isn’t AS exciting or cinematic compared to needing fluff to pad it out), but it makes for a very good portrayal of an American icon.

PG-13 for thematic content throughout, violent material and language including racial epithets

Shot on a variety of digital cameras and finished at 2K, Harriet looks absolutely stunning on home video. I’m talking immaculate to the extreme. The first show of John leaning over Harriet after she’s had one of her fainting spells is jaw dropping, as you can see every line, crease, and follicle on his faith. The film is given a slightly dusty look with all of the earth tones and Southern plantation areas, but the color grading is still very neutral, with clean lines and great details all around. There’s some VERY mild banding in a couple of other scenes, but otherwise I could find no fault with the digital picture in terms of artifacting. Colors are bright and sharp, while fine detailing is resplendent whether it be in the Southern plantations, or the more urban areas of Philadelphia. Texturing is amazing, showcasing the rough hewn clothing of the slaves, as well as the brocade and luxury of the upper class’s living situations.

I wasn’t expecting perfection from Harriet due to the dramatic nature of the film, but perfection is what we got. The film’s 7.1 DTS-HD MA track is filled with heart, soul, and an encompassing mix that uses pinpoint precision sounds to cocoon the listener in layers of sonic warmth. Chirping birds, buzzing insects, rustling grasses, scratching sounds of leaves rubbing against each other. ALL of these can be heard with ease as the surrounds and mains work together harmoniously to create a wildly intricate track. The thundering of horse hooves or the blasting of black powder fire arms set off sonic attacks that lift you off your seat, and the soul inspired gospel music of the slaves fills the room with power and authority. The quieter moments are still perfectly intelligible at all times, and the dynamic range can shift from quiet to incredibly shocking at a moment’s notice. PERFECT.

Harriet itself doesn’t go straight for Oscar bait like I was expecting, but rather sticks to the simple nature of the story, and builds upon the character of Harriet Tubman as the movie goes along. Cynthia does a great job of anchoring the movie to a single character, and the timeless story is well done on a technical level. It isn’t a “masterpiece” as one would expect for a movie with an academy awards nomination, but I don’t think it has to be. It’s a good biopic that tries very hard to stick to the facts (or as many facts as possible, as all legends from centuries ago have been altered or embellished to some extent) and makes for a very impressive watch. Universal’s tech specs on the disc are near flawless expect for the extras, and I give this one a hearty thumbs up.

Thanks for the review. I do enjoy historical movies so will see this one.
J