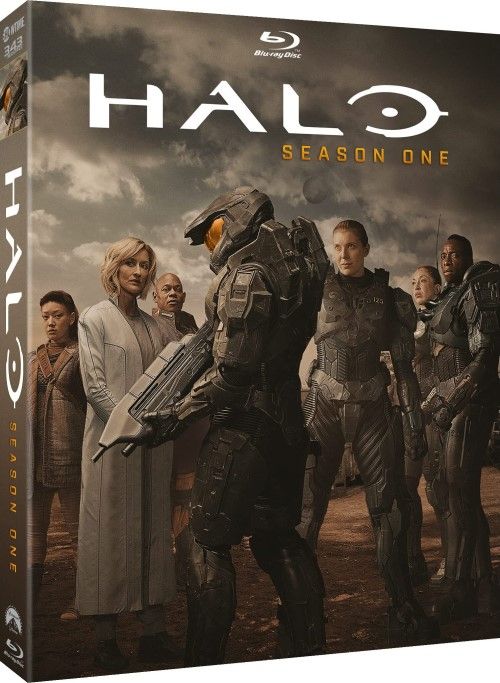 Movie
I’m quite literally the perfect target for the Halo show. I was a brand new freshman in college when myself and other computer science majors were talking about this revolutionary new first person shooter coming out called Halo. It had been in active development for a few years by a small company called Bungie, and then suddenly in 2000 Microsoft bought them out and our wild fantasies about a game changing FPS were dashed when we figured it was going to be corproatized and destroyed from the Microsoft acquisition. Well, come my sophomore year just before winter break and Microsoft releases the game, and it turns out to be a killer FPS. Maybe not as great as our teenage minds had hyped it up to be, but it was a LOT of fun in multiplayer mode. Then there were the years of playing Halo 2 on the original Xbox, literally screaming across the house at my friends as we hooked up multiple systems to play via LAN (if you grew up in those times nothing was more rage inducing than locking on with the sword and having someone shotgun you in the face mid swing, or the shrieking whine of a missile lobbed across the other side of the map as it somehow magically hit you right in the chest). Halo 3 and Reach were when I was starting to phase out of the games, but the latest several games pulled me back in with a rather solid storyline. Thus you can be sure I was one of those nerdy 40 year olds instantly re-living those early 20 somethings of my youth when I saw the press release for the show.

Now, with that being said, you can also bet that as deeply lodged in the lore as I was/am that when we saw that the show basically had nothing to do with Halo outside of names, armor and weapons and a few hints here and there, you can bet I was HUGELY disappointed. The series is not Halo. It’s a generic sci-fi action series that blends parts of Starship Troopers with Firefly and added in a few trappings that everyone knew from the game. Interviews and stories from the writers basically confirmed what we all knew after the first couple of episodes. They decided to ignore the lore nearly completely and just made their own show with the framework. HOWEVER, the show itself isn’t bad at all if you can separate it from the knowledge that this is Halo in name only. The show is competently directed, has a really nice budget, and the Spartan armor looks really cool.

The story basically drops us into the middle of the Human/Covenant war by introducing us to Kwan Ha (Yerin Ha) on the outpost of Madrigal. There a covenant ship touches down and slaughters an entire village looking for an ancient alien artifact. However, the aliens are thwarted when Master Chief (Pablo Schreiber) and his team of Spartans (genetically and technologically enhanced super soldiers) drop into the middle of the massacre and literally wipe out the covenant forces. While there, Master Chief picks up the alien artifact that the Covenant were after along with Kwan (who is the only living survivor of the colony). On the way home, Master Chief gets a kill order for the girl, and against all of the super soldier programming he has embedded in him, the soldier decides to go on the run with the young girl and figure out what the Covenant really after before it’s too late.


The show itself is pretty fun despite being Halo in name only. Outside of Master Chief taking his helmet off WAAAAY too early in the series (seriously? The first episode? They Kylo Ren’d him!) and some generic sci-fi trappings, I was actually enjoying the show. It’s quickly paced, has some good action, and there’s ENOUGH of the Halo lore about the ring and the covenant that I was intrigued. A the end of the day it’s a rather enjoyable show, but one that gets hampered by too much deviance from Halo lore, and some pretty obvious video game cheesiness. This is by no means a Resident Evil debacle (the Netflix show was horrifyingly bad), but there ARE quite a few video game tropes and easily predictable routes that the show follows, making this purely a popcorn show.

The digitally sourced show looks excellent, and rightfully so with a 4K native master being used. It’s very richly colored, with bright shades of blue, green, dirt shades and all sorts of neon tones used for the space docks. It can be very grungy at times, but also crisp and Star Trek 2009 glossy as well. Fine details are never under any doubt, with great facial tones, nuances on armor, and set pieces. I did notice that the CGI DIIIIID get a bit wonky here and there (aerial shots showed it the most), and black levels showed some banding and crush. Otherwise, this is a top notch transfer

I was a bit surprised with the 5.1 Dolby TrueHD track. It’s not that it’s a bad track, or there’s anything wrong with it, I just expected a bit more. It has a distinct volume level drop that needs about 4-6 DB’s over my normal listening volume to even out, and even under full swing feels a bit constrained and stunted. Bass response during the battles and ship take offs are great, and the surrounds moderate, but once again. I just felt like something was ‘missing’ to make it great. All that aside, the dynamics are really strong, with solid vocals up front (once you make the volume adjustment) as well as a good sense of ambiance in the alien worlds.

• Becoming Spartans - Our larger-than-life heroes
introduce one another and share their thoughts on the process of becoming Spartans. Master Chief, Kai, Riz, Vannak and Soren recollect
their memories from training and early bootcamp to the epic result we see on screen.
Showrunner Steven Kane and director Otto Bathurst join the Spartan team to reveal the
challenges and joy of creating near-perfect superhumans encountering imperfectly human
emotions for the very first time.

• Creating the Costumes of Halo - Costume designer Giovanni Lipari brings insight into
the creation of the 5 different worlds shown in HALO: SEASON ONE. Giovanni shares
not only the process of creating the costumes and styles for each of the planets, but
provides background and history for the different groups and their connection to one
another.

• Weapons and Vehicles of Halo - Master Chief’s assault rifle or the sound of a warthog?
Two emblematic tools of the Halo universe. Property Master Andrew Orlando leads us
through the steps of the realization of Covenant and Spartan weapons from initial design
to final construction. Sophie Becher, Production Designer, joins in to share details about
the newly invented spaceships of this one-of-a-kind universe. There is no Halo without the
sound and look of warthogs, and Picture Vehicle Coordinator Parádi Sándor Jr. joins to
tell us how it and other Halo vehicles were conceived.

• The World of Halo - Join us for an inside conversation with Executive Producer Kiki
Wolfkill, Director Otto Bathurst, Showrunner Steven Kane, Pablo Schreiber and other cast
members as they break down how the story and characters of this sci-fi epic game were
brought to the screen.

• Adapting Halo - The Halo production teams give viewers an inside look at how visual
effects, artful direction, and purposeful set design were used to create the show’s other
worldly look and feel. They share how each setting is unique and immersive, and built on
a massive scale.

• The Culture of The Covenant - Take an exclusive tour alongside remarkable talent,
visual effects artists and production teams who show us how they brought to life the setting
and aliens that make up The Covenant.

• The Making of Cortana - Actress Jen Taylor discusses her character’s emotional journey
throughout the series and reveals how the filmmakers brought Cortana to life on screen.

-- 102 - Host Sydnee Goodman takes viewers behind the scenes of Episode 2
("Unbound") with actor Bokeem Woodbine, Director Otto Bathurst, as well as some
lucky fans who got to attend the red-carpet premiere of Halo the Series.

-- 103 - We dive into Episode 3, "Emergence." Here, host Sydnee Goodman talks
with star Charlie Murphy (Makee). Plus, see how the show built one of its most
impressive sets and meet some of the most passionate Halo fans in the world.

-- 104 - Host Sydnee Goodman welcomes Cortana herself, Jen Taylor! They discuss
Jen's longtime role as Master Chief's fan-favorite A.I and how bringing the
character to life on TV brought new challenges. Plus, get a lesson in the Covenant
language of Sangheili from the linguists who created it. Then, passionate Halo fans
explain what Master Chief means to them. Finally, get a special look behind the
scenes of the incredible visual effects of Halo the Series, including how the
talented artists brought Cortana to live action.

-- 105 - In this installment of Halo the Series: Declassified, host Sydnee Goodman
talks with Kate Kennedy (Kai-125). Plus, behind the scenes of the stunts and
weapons of Halo the Series and a look at the world's largest Halo collection.

-- 106 - Host Sydnee Goodman is joined by Natascha McElhone (Dr. Halsey) to
explore the complicated nature of Halsey's work with the Spartans. Plus, we visit
Spartan bootcamp, talk with composer Sean Callery, and more.

-- 107 - Host Sydnee Goodman chats with actress Yerin Ha (Kwan Ha) about her
character's journey from average kid to freedom fighter. Plus, enjoy a visit from
actor Wil Wheaton, a closer look at iconic Halo vehicles, and plenty of Easter eggs.

-- 108 - In this installment of Halo the Series: Declassified, host Sydnee Goodman
welcomes star Olive Gray (Dr. Miranda Keyes) to discuss their approach to a
character that has complicated relationships with everyone around her. Plus,
behind the scenes with Director Jonathan Liebesman, a cosplay tutorial, and more.

-- 109 - On the finale installment of Halo the Series: Declassified, host Sydnee
Goodman welcomes Executive Producer Kiki Wolfkill and Executive
Producer/Showrunner Steven Kane to dive deep into all the big events, so far.
Plus, enjoy a thank you from the cast and crew and an enlightening discussion
about reflecting the real world in sci-fi.

Halo: Season One may not be as compelling as the first couple of games (or even the later games), but it’s a satisfying enough season that as long as fans of the show can put aside their preconceptions will at least get a nice popcorn watch out of. Pablo is rock solid as Master Chief (ESPECIALLY with his helmet on), and the machinations behind the scene with the Admirals and Halsey adds some nice intrigue to the mix. The 5 disc set from Paramount is impeccable, with only 2 episodes per disc spread out across the BD-50s and some substantial extras. Fun popcorn watch is my personal recommendation for the season.