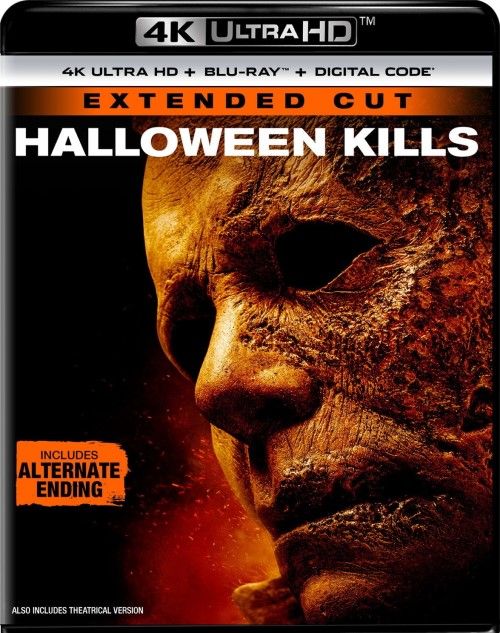 Movie
It seems that nostalgia baiting is one of the biggest trends in Hollywood at the current time period. I mentioned it during my Matrix: Resurrections review, and it’s been ever present on my mind in the last year alone. Films like Spiderman: No Way Home, Ghostbusters: Afterlife, The Matrix: Resurrections, and countless others seem to be bolstering their appeal by hearkening back to older actors, older characters from previous installments in a franchise and saying “look! We have what you really want here!” as they bait audiences into liking their movies. Now, I fully understand that movies are ALL about nostalgia, and long running characters are nothing new. But it just seems like Hollywood is trying so desperately to infuse their stories with something new, as ideas seem to be running out in mainstream blockbuster cinemas.

2018 brought us a sort of reboot/sequel to the Halloween franchise, getting rid of all the tangled story lines and mythology of Michael Myers that had mired the franchise down years ago, and instead pulling a Terminator: Dark Fate and acting as a sequel to the original 1978 film. To top it off, they brought back Jamie Lee Curtis as Laurie, and then “pow!”, blockbuster gold. Halloween made bank 3 years ago as it did what many thought was impossible. Bring satisfying closure to the series as Laurie and her offspring complete the cycle of killing, putting Michael Myers away for good and letting the franchise die out with dignity. The movie wasn’t GREAT, but I really enjoyed the Halloween era flick, and it brought one of the most satisfying endings to a slasher career as legendary as this (and we didn’t even go to space once!). HOWEVER, 2019 brought another announcement. Co-writers Danny McBride and David Gordon Green (who directed the film) saw dollar signs, and announced that this wasn’t a one off event, but due to the success of Halloween 2018 they were going to make it into a trilogy (oh boy, there goes that whole “ending things with dignity” scenario) and that Halloween Kills and Halloween Ends would both come out right on top of each other (2021 for Kills and 2022 for Ends).

This film opens up with a montage showing how deputy Hawkins (Thomas Mann as 1978 version) COULD have ended Michael Myers before his reign of terror began, only to flash forward to just seconds seconds after Laurie Strode (Curtis), her daughter Karen (Judy Greer) and granddaughter Allison (Andi Matichak) have brought down a house on Michael Meyer’s head, burning him alive at the end of Halloween. Rushed to the hospital, Laurie doesn’t see that the fire department has actually come on scene in time to put out the blaze, freeing Michael Myers from his near death, and unleashing him upon the entire town in a matter of hours.
.

However, the townsfolk are sick and tired of Michael’s reign of terror over the last 40 years, and are going to do what it takes to put him in the ground for good. Led by OG Tommy Doyle (Anthony Michael Hall of John Hughes film fame), the townsfolk band together in groups to hunt down and destroy evil. But here is where the film sort of turns weird. Instead of being a typical Michael Meyers film where he hunts and kills everyone, it turns into a sort of strange social commentary on how mob mentality turns people just as evil as Meyers. The town literally undergoes a sort of mob psychosis in their rage, even killing an innocent man because of their fear. All the while Michael Meyers is walking around and killing off all of the original 1978 characters that survived (as I said, memberberries. LOTS of kids and teenagers from the first movie show up to get offed one by one, all played by the original actors some 40 years later), leading up to Laurie vomiting exposition on Michael’s inability to die as she sets up the premise for Halloween Ends.

I’m not really sure whether I like or dislike Halloween Kills. I really enjoyed the 2018 Halloween as it did an ending right, but this one retcons that ending, falling into the same slasher trap of not killing the killer in the search for more sequels. And that’s exactly what this movie feels like. A sequel that was made as a cash grab, and they shoe horn in more scenarios as a middle act so that they can wrap up everything (again) in the next film. I really did kind of like using all the original actors from the 1978 film to bring more survivors to kill off, but at the same time the dialog is just ATROCIOUS in this movie. There were times I was visibly cringing at some of the one liners that were spoken into the camera with a straight face. Yet, at the same time I kind of was having a ball with the whole meta nature of the thing. Many of Michael’s kills of the OG cast was recreations of classic deaths, or near deaths, from the first movie or so, and it added a layer of “niiiiiiiiiiiice” to the whole affair. The big kick off with the mob mentality commentary through my for a loop, but I started getting into it as I realized the mob were the equivalent of the dumb teenagers that the slasher kills in your typical horror movie. I started rolling with it, then the whole social commentary thing went overboard in the last act, and things started becoming super cheesy again with Laurie vomiting the setup for the second movie in a narration cluster bomb that the audience fully realizes is nothing but a setup.


Rated R for strong bloody violence throughout, grisly images, language, and some drug use

If you saw the 2018 film, then you’ll know the look of this one. The 2nd of the franchise to use digital, it looks really smooth and clean, with a fairly bleak looking color palette here that includes your typical blue/grays and some autumn colors thrown in for good measure. There are splashes of bright red (Judy Greer’s sweater), and some other primary colors, but this is a fairly desaturated and completely intentionally stylized low color look. UNLIKE Halloween 2018, this is not a 2K master upscaled to 4K. This is a native 4K master that was used for the 4K UHD (and “dumbed down” for the 1080p Blu-ray). However, due to the desaturated and dark look to the film, it doesn’t look a WHOLE ton better. It’s good, but the darker shots leaves some detail to the imagination, and the low color grading makes it so the Dolby Vision doesn’t really pop in the color department. That being said, the blacks do show noticeable improvements over the Blu-ray and the older film, with deeper and inkier night shots and some excellent lack of banding or crush. All around good disc.

Unlike Halloween 2018, which used a DTS:X track, we get a Dolby Atmos mix instead (on both 4K UHD and the Blu-ray). Much like the DTS:X track from 3 years ago, it’s a good mix, but never a truly GREAT one. Mostly because the Atmos overheads are used VERY sparingly (except for some mild ambiance). The track, much like many of its predecessors, is rather front heavy and relies heavily on thumping footsteps, a few crashes, and the creepy iconic score to really fill out the side and rear channels. Bass is punchy and tight for the death scenes, and while this isn’t a show stopper track, is still technically very good by all accounts. Nothing out of balance, dialog is crisp and clean, and surrounds (when utilized) well used. Solid mix all the way around.

• GAG REEL
• DELETED/EXTENDED SCENES
• HADDONFIELD'S OPEN WOUNDS - Those who die at the hands of Michael Myers are not his only victims. We look at some of the returning characters, and why their past traumatic encounters with The Shape made them natural candidates to try and defend Haddonfield against him.
• THE KILL TEAM - It takes a big team to create a film the scale of HALLOWEEN KILLS, especially when part of the task is raising the bar for Michael's gruesome kills. We hear the people behind the mayhem discuss how they continue to push the franchise to new heights.
• STRODE FAMILY VALUES - Filmmakers and cast discuss the three generations of Strode women that have been terrorized by The Shape, and the roles Laurie, Karen and Allyson play in trying to vanquish his evil.
• 1978 TRANSFORMATIONS - Shooting new footage that matches the feel of the iconic 1978 footage is no easy task, and even takes a little bit of luck. We reveal some of the secrets of how filmmakers achieved these stunning sequences.
• THE POWER OF FEAR - The impact of Michael Myers' pure evil extends far beyond his victims. We examine how fear of The Shape changed the psychology of the people of Haddonfield.
• KILL COUNT
• FEATURE COMMENTARY - Director/co-writer David Gordon Green and stars Jamie Lee Curtis and Judy Greer

​
Halloween Kills is more of the same that we were used to in the 2018 film, just with more fan service in the casting, and a lot of weird social justice commentary on vigilantism. It’s sort of fun, sort of weird, and actually sort of made me sad that we didn’t just end with the 2018 film. Though, if you’re a fan of slasher films for very long, get used to it. These franchises are known for cheesy continuations so it should come as a shock to you. The 4K UHD disc is a very solid disc, with video that really mimics the look of the 2018 Halloween and good audio. Long and the short, this is a filler film to get us to the “real” ending (that was made after the 2018 film was successful, even though that movie was the intended ending originally) and you should be satisfied if you’re looking for some fun and gory death scenes.

I'm such a huge fan of Halloween and Halloween II. It kills me that they keep beating the franchise into the ground. I haven't given this one a watch yet. Not sure I will.

Todd Anderson said:
I'm such a huge fan of Halloween and Halloween II. It kills me that they keep beating the franchise into the ground. I haven't given this one a watch yet. Not sure I will.
Click to expand...

it's not the worst in the series... it's just one of those things where it's not the best either. Still a Halloween film, so I watch

I liked this one but I am sure it will not end with Halloween Ends. Thanks for the review.

Asere said:
I liked this one but I am sure it will not end with Halloween Ends. Thanks for the review.
Click to expand...

Sure he did lol. Give it awhile and he will resurrect haha.

Asere said:
Sure he did lol. Give it awhile and he will resurrect haha.
Click to expand...