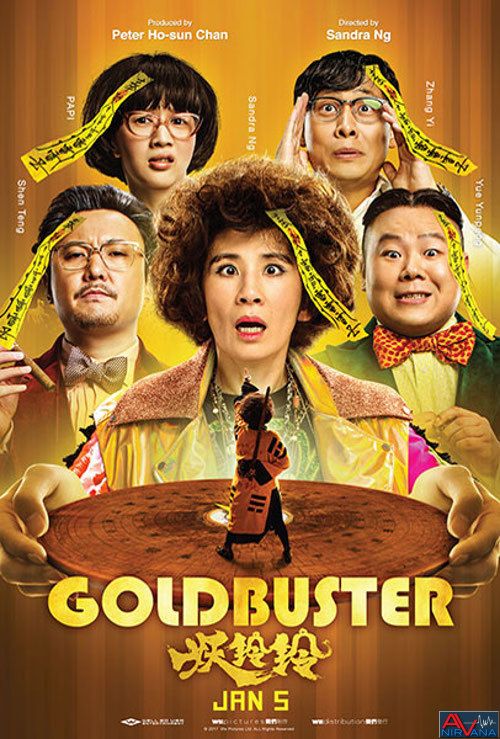 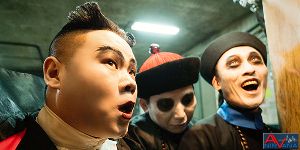 Movie
I usually don’t do many digital reviews (this is actually only the 2nd one we’ve done here at AV NIRVANA), but I have soft spot for Well Go USA’s Asian offerings and I had to take on the chance to review Sandra Ng’s directorial debut. The woman has been a legend in the Chinese comedy circle for quite some time, and she lined up quite the cast for this little horror comedy. Her life long acting friends Francis Ng and Alex Fong show up from Hong Kong, and she even pulled in a couple of high level Chinese comedians to star alongside her. I had really high hopes for Goldbuster, but unfortunately Sandra’s debut is a bit of a mixed bag. Her slapstick style humor is zany and generally hilarious, but the pacing is very awkward and herky jerky, leaving the audience feeling like they’re watching a series of vignettes rather than a whole movie.

With glimpses of Stephen Chow, Sam Raimi, and even John Landis, Sandra Ng crafts a wacky tale of melodrama, slapstick humor, and gory goodness. The plot is rather simple. 7 people live in 4 separate apartments in a dilapidated old apartment complex. Right now they’re the ONLY people left, as a real estate developer named Richie Xiu (Shen Ten) has pushed out all of the other tenants in order to buy the building and bulldoze it in order to build up a skyscraper (pretty standard motivation in films actually). The 4 different families include a pair of washed up gangsters, a widower and his son, an erotic cam girl, and a pair of drug making inventors who just want to be left alone. Since the developer has been hounding them for quite some time, the 7 people stay holed up in the old building, never coming out for anything so that they aren’t FORCED out.

The developer’s son Xu Tianyu (Yue Yunpeng) has enlisted the help of a couple of minions to drive the rest of the tenants out through fear, and these two doofuses had the bright idea of dressing up as a ghost to do so. The only problem is, the 7 remaining tenants just aren’t falling for their tricks (possibly spurred on by the reality that they aren’t PAYING to stay in the building, and would be better off there, ghosts and all). However, they decide to fight back by hiring Yiu Ling-Ling (Sandra Ng herself), a swindler posing as a ghost hunter, in order to drive out the evil spirits. Yiu does her normal smoke and mirrors trick to skim a few bucks off the residents, but soon becomes embroiled in a fight for their lives when they run into some TRULY undead monsters that force her to become leader of the group and lead them to safety.

Not every joke lands solidly in this zany comedy, but the move at such a break neck pace that some of them are bound to hit home. The film is really separated into 4 different chunks, and each “act” feels distinctly different than the last. The first one has to do with the two minions of Xu Tianyu trying to terrify the tenants, with the second being Yiu Ling-Ling’s carefully crafted tricks to pay them back. The third shoots COMPLETELY into left field when the zombies invade the city, and feels a LOT like Army of Darkness meets Kung Fu Hustle. The last act is more down to earth, and has Sanda Ng going into full lunacy mode as she realizes the betrayal that she did, and tries to rectify the situation and turn the tables on Ricky and his son Xu after they’ve stolen the land.

It’s a bit of an awkward up and down roller coaster, with Sandra playing her normal slapstick persona, and the rest of the cast firing on all 4 cylinders trying to make it work. Many of the jokes DO stick, as I said, but there are so many failures as well that the movie is not nearly as even as it could be. Papi, Francis Ng, and Alex Fong are simply HILARIOUS, but it’s the pacing of the movie, and the missed jokes that keep it from being as funny and endearing as it should be.

This particular review was sourced through Vimeo, so the only way I could view it was on a digital stream that had some fluctuating bandwidth issues (my internet was fine, but it had some buffering issues that introduced artifacts that weren’t a part of the original image), thus I can’t give an accurate analysis of the video quality, especially since differing resolutions and compression techniques (and I was limited to 720p). The film looks rather nice in terms of colors, with bright shiny shades for the cam girl’s costumes, and the dimly building is appropriately shadowed with green and blue. Past that, I’ll have to stand back and not issue a score, as the stream just isn’t a reliable way of analyzing a film’s video quality.

The same thing can be said of the Mandarin audio track. The vocals were nice, but the track seemed like a 2.0 track (the video source wouldn’t tell me what codec it was in, but I’m assuming a compressed 2.0 track), so this score will also be omitted. The subtitles were both in Mandarin and English (one on top of the other interestingly enough, but I assume that was a feature of Vimeo, as other retail sources of the stream will probably give the option to change them up). The ONE thing in the audio track that I took a bit of a worry over was the subtitles. The translation was a little bit rough, and had the markings of a quick literal translation, without efforts to translate into English vernacular as well.
.

Goldbuster is a film that I REALLY wanted to like more than I did, but the uneven nature of the film just kept me from really loving it. That’s not to say that I didn’t enjoy the watch, but it is a flawed film by Sandra Ng, and one that shows she needs a little more work BEHIND the camera. Hopefully she’ll learn from the mistakes in Goldbuster and use her zany comedic talents to better use in the next adventure. Sadly the film is not getting a physical release (thus the nature of this digital review), but the film can be purchased at Amazon video and other digital retailers (as well as rented their as well). It’s not the greatest Chinese comedy ever made, but if you’re a fan of the wacky styling of Stephen Chow and Sandra Ng’s other works, then this would make a fun enough rental.