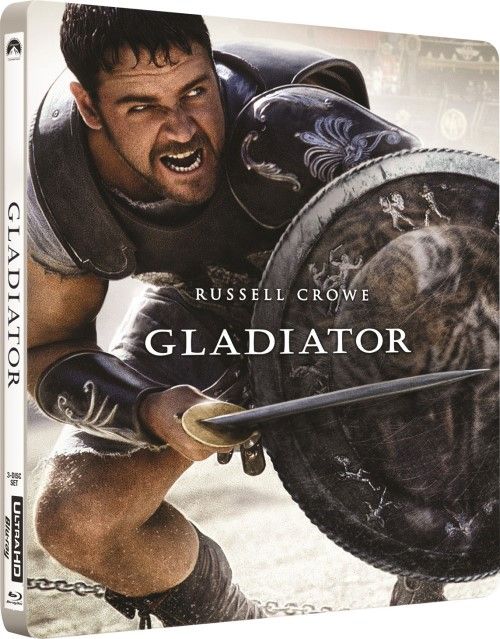 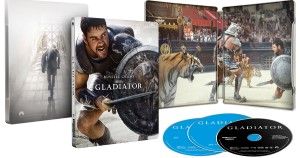 Movie
“ARE YOU NOT ENTERTAINED!? “

Paramount continues on with their pattern of re-releasing Blu-rays and 4K in some snazzy steelbook sets for us collectors. Like the rest, there's nothing NEW in these editions outside of the packaging. The same discs are included inside, and the same digital copy is included. Just thing time it's a REALLY classy steelbook case to hold them all (thus my video and audio and film critique will remain the same.)

Back in 2000 I was a squirrely little high school senior with very little on my mind besides getting out of final semester physics, and looking forward to when I would be a free man, devoid of rules from my parents and the future of college ahead of me (being an adult wouldn’t sink in for a few more years). However, the big buzz going around my tiny little high school (my graduating class was about 200 people) was the huge R-rated blockbuster hit, Gladiator. Everyone was raving about it, but I wasn’t a wild fan of Russell Crowe, so I ditched my friends going to see it and did other things instead. It wasn’t till about 2-3 years later when I was halfway (or so) through college when somebody whipped out the 2 Disc DVD and said “dude, you HAVE to see this!”. Almost three hours later I was cursing myself for never having seen it, and heading on down to Frys Electronics in Tigard Oregon to pick up the DVD.

Fast forward just a few more years and Paramount was starting to put out their “Sapphire Edition” line of Blu-ray films (meant to be a premium line that was dramatically short lived) and Gladiator was near the top of the list. Sadly the Blu-ray was a source of much consternation among the home theater community as the upgrade was abysmal, with copious amounts of Digital Noise Reduction (it was so bad that you could infamously see arrows appearing and disappearing across the screen in the opening battle due to the digital scrubbing), poor detail levels, and a general waxy look that put even the Blu-ray of Face/Off to shame. A year later Paramount fixed their blunder with a glorious looking re-release of the film and offered an exchange program for owners who already owned the botched Blu-ray. Now it’s nearly a decade later and what better way to keep the 4K UHD progress going than to release one of Paramount’s greatest selling films on the latest format.

I almost need no introduction to one of Ridley Scott’s greatest masterpieces, but I will anyways. In the year 180 A.D., the Romans are winding down an extended war with the barbaric Germanic tribes to the north of the Roman Empire, and general Maximus Decimus Meridius (Russell Crowe) is ready to head back to his family in Spain after many years of fighting. However, his dreams are cut short when Emperor Marcus Aurelius’ (Richard Harris) conniving son, Commodus (Joaquin Phoenix) murders his aging father and puts the blame squarely on the shoulders of Maximus. Scheduled to be executed, Maximus escapes from his own men and makes his way back home, only to see the remnants of what WAS his home, and the burned corpses of his wife and child. Broken, on the verge of death, and completely alone, Maximus is picked up by a roving Gladiator trainer named Proximo (the famous Oliver Reed) and put to work fighting in the Arena.

However, Maximus has far greater plans than just living and dying at the whims of rabid Roman citizens, but instead has his eye on a far darker goal. Revenge on the man who took away his emperor, and destroyed his life. Commodus is sitting high and mighty on the throne, leering at his sister (Connie Nielsen) and safe in the knowledge that no one knows of his crimes against his own father. But when Maximus comes to Rome to fight in the grand arena, his own demons come back to haunt him as the people LOVE Maximus, and there is no way to kill him besides throw man after man against the trained military general in hopes that one of them will kill him before Maximus can get close enough to put a blade in Commodus’s heart.

Gladiator is truly an epic film. Whether you watch it in the theatrical form, or 16 minute extended cut, you truly are in for a treat, and I still get giddy as a school girl today, just as I did the first time I watched it in college. Ridley Scott has had some dubious films come out in the last decade (sadly I think the guy has lost his creative spark), but back in the day Ridley Scott was untouchable. Gladiator came out while he was still on top of the world, and his passion for the film really shows. Maximus is not just a one dimensional revenge machine. He’s calculating, compassionate, relatable, and a ferocious warrior that infuses the audience with as much excitement as Maximus did in the arena. The movie was so well received due to the intricate, yet so simple, tale of revenge that it swept the 2001 academy awards and cleaned house with 5 trophies that year (beating out Crouching Tiger, Hidden Dragon, which was an incredibly close contender), and has become a modern sword and sandal classic.

One of the strongest comparison to other sword and sandal epics is that of Stanley Kubrick’s Spartacus. Both films are wildly differently in execution, but the sense of sweeping epicness is comparative between the two classic films, with Russell Crowe turning in a performance that rivaled that of Kirk Douglas. Maximus is both powerfully commanding, and humble at the same time, earning Russell Crowe another best actor award, just after he came off L.A. Confidential and The Insider (where he earned his first ever awards in that position). Crowe demands respect, but also is so honorable that it makes it extremely easy for the audience to root for him as he cuts down everyone in his way. Phoenix is well cast as the unhinged Commodus, and acts as the perfect foil for the honorable and stable Maximus Decimus Meridius. If I had to have ONE fault in the film, it’s that it has a difficult time with the third act rebellion, as it looses a bit of steam between the reveal of WHO he really was in the arena, and the end battle between Maximus and Commodus.

Rated R for intense, graphic combat (theatrical) / Not Rated by the MPAA (extended)

It seems to me that the master used for this release is the same 2010 remaster that was used to fix the botched 2009 Blu-ray edition that was so maligned. The same signs of print wear, and certain flecks of dirt and debris here and there appear to match up perfectly, which causes me to surmise that is the same 8 year old transfer. That’s not a negative statement at all, considering the 2010 Blu-ray remaster was widely considered one of the best transfers of the time. The 4K UHD boasts improvement in all aspects of the film, with more nuanced textures and detail levels across the period piece clothing. Look at the dusty and dented armor that Maximus sports, or the dusty arena where Maximus bends over to pick up the broken arrow. You can see every grain of sand, every little bit of dirt clinging to the arm hairs of the general. However, the film is still a little bit soft compared to some other 4K UHD films I’ve seen, and there are little bits of print damage that are still on the master.

The biggest boost to the film is the use of HDR applied to the colors. Like Saving Private Ryan the HDR brightens up the image considerably, but does so in a way that doesn’t affect the integrity of the filming style. The dusty, sandy environment is sharper and cleaner, with luscious earthy tones, combined with brilliantly saturated blood splatters, or the beautiful clothes of the Emperor and his staff. Flames look brighter and vivid, with smoke clouds billowing up from around their target area. Even when the film has a light blue filter applied to it and is meant to be dark and brooding, the brightness doesn’t wash it out or cause any visual issues that I can see. Blacks are deep and inky, with no signs of crush or banding at all (and luckily, since we’re using the 2010 remaster meant to FIX the DNR of the 2009 edition, no signs of noise reduction or waxiness at all). It’s not a perfect 4K UHD disc, but it comes really close and is still one excellent looking film in 2160p 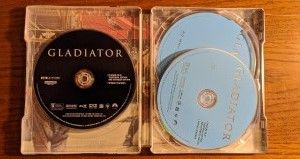 I find it interesting how the same studio will mix up the different encoding companies for their 4K or Blu-ray releases. Paramount USUALLY release their object oriented tracks on Dolby Atmos, and did so with last week’s Saving Private Ryan, but for some reason they have used the DTS:X format for Gladiator. Not a big deal as pretty much any modern receiver will do BOTH Atmos and DTS:X, but just a curiosity for those of us outside of the boardroom decisions. The Blu-ray sported a hefty 5.1 DTS-HD MA mix, but the uptick to DTS:X certainly allows the track to really flex its muscles. The track is much more spacious with the added channels, allowing the cheering of the crowd to come from different angles, and the extra breathing room for a heftier mid range. Overheads aren’t wild and heavily used, but they do make for some great immersion with the raised arena seating and the crowd bellowing from up above. LFE is powerful and throaty, adding hefty weight to the infamous battle scenes, and the throbbing low end to Hans Zimmer’s award winning score.

Like always, if you don't have the Blu-ray or the previously released 4K UHD disc, then this is a great buy. For those of you who HAVE the previously released 4K disc, then it's going to depend on how much of a packaging collector you are. These Steelbooks are aimed squared at steelbook collectors and new buyers over upgraders, but even I have to admit that this is one of the coolest looking steelbooks I've seen from Mondo in a while. The glossy silver with gold look is really nice, and the inside art is actually very impressive as well. The film itself goes without saying, and is a must own for any film fan. Whether you get this release or the previous 4K UHD release will depend solely on price, as well as whether you want this collectible packaging. Buy without worry, whichever edition you do choose though.