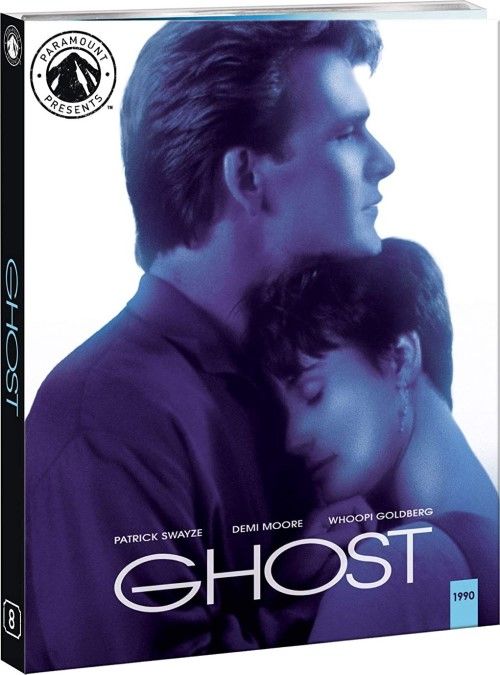 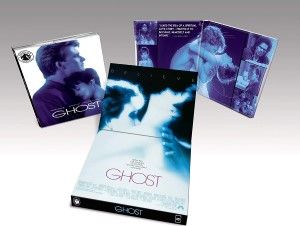 Movie
Well, to celebrate it’s 30th anniversary Paramount decided to give 1990’s Ghost the royal (ish) treatment and include it in the latest batch of their new “Paramount Presents” line of 4K remastered Blu-ray catalog titles. I haven’t personally dusted off my Blu-ray copy of Ghost since it came out in 2008 as it was one of those movies that got played on cable for the last 30 years, and I had kind of been worn out of watching the classic. Now, don’t get me wrong, this is still a fun movie. After having given it a break for 12 years I dove into the film with gusto and remembered why I loved it so much. The movie works as a genre bender mixing in comedy, drama, thriller, and even the supernatural into one 2 hour long event. It was at the peak of Patrick Swayze’s (may he R.I.P.) career and Demi Moore was just coming into her own. It was the perfect mix of magic, love, and 1990s drama (that would be perfect by Michael Douglas) and a film that still hasn’t lost it’s spiritual center 30 years later.

Sam Wheat (Patrick Swayze) is a high level banking executive who has it all. He and his girlfriend Molly (Demi Moore) have just moved in together, and he’s on top of his business game. Along with his best friend and co-worker, Carl (Tony Goldwyn) the pair are working at restoring a loft for their new life together, until it all comes crashing down. After a night out on the town in New York City, Sam is gunned down by a mysterious assailant, leaving Molly all alone to pick up the pieces. However, Sam isn’t gone JUST yet. Refusing to walk into the “light” and leave this earth, Sam is determined to stick around and figure out what went wrong.

Desperately trying to stay with Molly, Sam learns the truth that he was never supposed to know. He was set up for murder and the man who killed him is still out there and looking to come after Molly next. The only person who can actually communicate with him is a con artist psychic named Oda Mae (Whoopi Goldberg), and she’s MORE than reluctant to help the spirit complete his mission on earth. A mission that will unravel a conspiracy that puts not only his own worst fears on the table, but puts Oda Mae and Molly in even deeper danger the more he digs.

I don’t mind a good romance, but Ghost is MORE than just a simple romance. It’s one of those “lightning in a bottle” films that takes advantage of Swayze’s stardom, Demi’s beauty, and even the comedy of Whoopi while rolling it up into a giant genre bending blender and hitting the frappe button. A move which SHOULDN’T work, but actually does. The film’s premise is sweet and endearing, and Patrick and Demi’s chemistry just elevates it. I’m usually not a fan of Whoopi Goldberg’s comedy, but she works well as the mostly straight faced Oda Mae (her comedy usually comes out in the form of sass rather than full on slapstick).

Even though it’s been pumped through every cable station for the last 30 years, Ghost has really held up over the years. The charming bits are still charming, and the drama is well worth it. My only “complaint” with the film is purely technical, as you can see some of the obvious split screening and use of 1990 optical effects to show the “spiritual” realm. Nothing big, but just gave me a chuckle when I watched it for the first time in 12 years.

Ghost has been given a brand new 4K remaster for the film’s re-release (sadly no 4K UHD, which would have been amazing) and it really is quite good. Watching this new edition first had me marveling at how film like and beautiful it looked (yes, film grain is intact, unlike the To Catch a Thief debacle from a few months ago), but when I pulled up the old 2008 Blu-ray I was shocked how well that one had held up, and how excellent it was for the time. The new edition mildly improves detail levels (the film was always a hair soft due to the filming techniques and optical effects), but if you know what to look for you can see the fine tuning done to it. Background textures at the bank where Carl is desperately looking for the closed bank account shows more nuance, as does the street scenes with Whoopi and the Nuns. The real noticeable improvements here is the fine tuning of the colors and the more uniform look of the grain levels. There’s been some slight color alterations to make the effects blend a little better, and I noticed a teensy bit of blue in some of the darker scenes. Overall this is a nice looking disc that improves upon the already excellent 2008 disc in clarity, color timing, and grain structure.

Like all the other “Paramount Presents” titles I’ve reviewed so far, Ghost copies over the same 5.1 Dolby TrueHD track that was found on the 2008 disc. That means a fairly good mix, but not a spectacular one. The film is very VERY front heavy, with most of the heavy lifting living in the three main speakers. Sub activity is slight, but does come into play during the subway train sequences, as well as the conflict at the end of the film. Surrounds display moderate usage, with some solid background noise in the busy New York City shots, as well as some minor ambiance during the rest of the movie (beeping computers, mumbling voices at an office, and debris fallen when the trio are hacking away at the loft). The sound mixing is a bit dated and I can understand that we really can’t do MUCH with the way the sound was recorded, so I’m more than satisfied with what we have to work with. As long as you’re not expecting some wildly innovative Atmos experience, you’ll be happy.

Ghost is a fun flick and the addition to the “Paramount Presents” lineup brings with it the much anticipated 4K re-master. I’ve been VERY pleased with all of the lineup so far outside of one (*cough, To Catch a Thief *cough) and this one falls very much in line with what I was expecting. A substantial upgrade on the video, the same audio mix, and some solid extras. HOWEVER, this time it’s a bit different. Instead of Paramount deleting extras from the old release, we have some deletion and some new ones. Two extras (Inside the Paranormal and Cinemas Greatest Romances) are cut from the release, but we get the addition of a new film maker focus. A bit irritating that we have to leave two legacy extras on the cutting room floor, but a bit of a trade since we get something new. Still, well worth checking out as the video shows some nice upgrades and the new “Paramount Presents” packaging is really classy looking.

Hmmm... I'd forgotten about this one. This whole 4k re-master to Blu-ray is a bit curious. Really not sure what to make of it.

It's really nothing new. It's just the latest mastering techniques. They used to advertise "Mastered in HD!" during the DVD days whenever they future proofed a new master for the release. "Mastered in 4K" has been going on for about 7 or 8 years with studios just upgrading the resolution every time they strike a new master. In these cases the Paramount Presents line is just them taking old and worn out catalog titles and give them fresh masters that just so happen to be in 4K on their end. My GUESS is that they're not popular enough to do a 4K UHD release, but who knows. All we know is that these are new remastered Blu-rays....*shrug

My thought is: why not just release as a 4K/BD combo pack and be done with it?