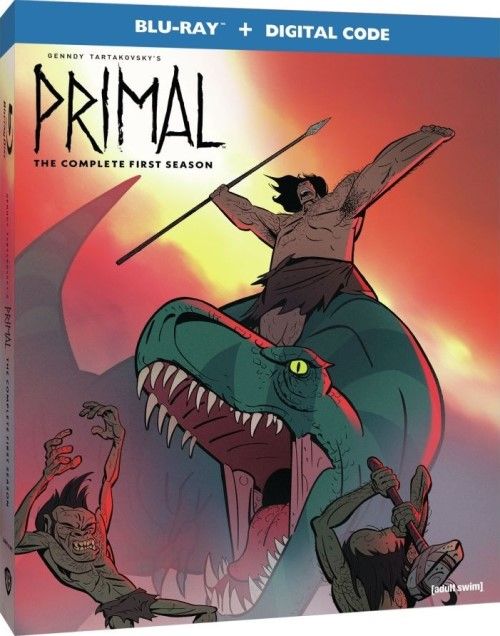 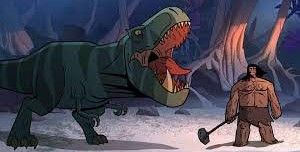 Movie
I was more than a BIT curious about Genndy Tartakovsky’s Primal TV show as I’m a huge man of the guy’s work. He’s most famous for doing the ORIGINAL animated Star Wars: Clone Wars miniseries animation, but he’s had his fingers in a LOOOOOT of pies over the years (although I’d be reticent to let my name be synonymous with Hotel Transylvania). Primal is supposedly one of his biggest passion projections, giving us a….well...primal telling of a cave man style dinosaur filled world of pain and suffering. Friendship and love. Magic and sheer brutality all in one. The show is complete dialogless (outside of guttural screams and yells), but it has the ability to tell a story on pure visuals and base noises alone. It’s not exactly for the young kids, and the hand drawn animation CAN get a bit gruesome (I mean, we see the main character’s family eaten by dinosaurs in the first 10 minutes of the series), but it is a blast to watch.

The show unfolds in a sort of vignette style of storytelling. Each episode showing us something about the primal world that “Spear” (what the main character is apparently called in the credits) lives in. Spear is a cave man doing what cave men do best. Hunting, fishing and trying to feed his family. However, when he arrives back home after a fruitful day of gathering food, he is privy to seeing his wife and 2 children eaten by dinosaurs in front of his very eyes. Filled with rage and heartbreak, Spear hunts down the offending monsters, only to find them attacking and doing the same thing to another dino mother. Fending off and slaughtering them all, he and the mother dino finally have peace. But unfortunately only after the predators ate her children as well.

In a strange symbiotic way, Spear and the mother dinosaur are on the same wave length. They’ve both watched their families decimated, and they both are just trying to survive. In an unlikely friendship, the two head out to make their way in the world and try to survive a world that wants nothing more than to eat them alive. Along the way the pair fight off monkey men, mystical witches (ala the Night Sisters in Star Wars), and even finding human companionship with a female slave who has escaped her captor’s clutches.

Primal is experimental film making at its finest. Tartakovsky is in fantastic form, and he tells the story in a unique way. We watch what happens, we see the pain and suffering that Spear and his dino friend endure. And while it all seems episodal and segregated at first, it’s not until the final episode that we see just how intricate the storytelling really was when it all wraps up. The “silent TV show” method of telling said story is ingenious in many ways, freeing the show from cheesy dialog and other animated traps that it could have fallen into. Instead the audience is left to imagine what’s going on in Spear’s head, and watch facial cues and action sequence to pick up the plot. It’s liberating, freeing and completely intoxicating at the same time. I honestly wasn’t sure I would be totally on board with the experimental nature of the show, but it just WORKS. The primal nature of the show thrives off of the brutal simplicity of it, and by the end of the season I can totally see why people were raving about it and begging for a second season (which is coming by the way).

Rated TV-MA By the MPAA

Primal is 100% pure hand drawn animation (Tartakovsky is a fanatic for hand drawn art) and it looks gorgeous. The show is remarkably dim and shadowing much of the time, with the primary colors look dulled and slightly muted. HOWEVER, this is contrasted with splashes of almost neon blood red as well as greens (think of the witches episode) and other various colors that are amplified when needed. I didn’t notice any major artifacting throughout the show, but I did notice a teensy bit of banding in things like the night sky (again, the witches episode is obvious. Especially when the queen witch descends from her perch and we’re all looking up). Nicely drawn, you get to see every little bit of line art, including edges of the lines with droplets showing, or a flicker where the artist missed. There’s no haloing, not edge issues, and all in all this is a great looking Blu-ray, even with 220 minutes of content and low 20s as the average bitrate.

Yeah, we don’t have any dialog for the show, but this is a rocking track. The screams, the roars of the dinosaur’s, and the pulsating score all make for an intense sonic workout. You can hear the shifting and panning effects as Spear leaps from one end of the screen to the other, as well as the splash and pattering of footsteps in the surround channels. LFE is crushing most of the time, and really adds a much needed dimensionality to the dialogless mix. The guttural vocals that are present are still razor sharp and well located in the front of the room, and even simple things like the scrape of a foot on the ground are impeccably replicated.

Genndy Tartakovsky’s Primal is not going to be for everyone. That’s not a negative for the show at ALL, but just a recognition that the lack of dialog and simple hand drawn animation may not appeal to someone looking to veg out in front of a cartoon. However, if you’re willing to invest the time to WATCH the show and pay attention, it is extremely rewarding. Warner’s Blu-ray looks and sound fantastic, but sadly the extras are limited to a 10 minute behind the scenes clip and nothing else. Still well worth checking out if you have the ability.