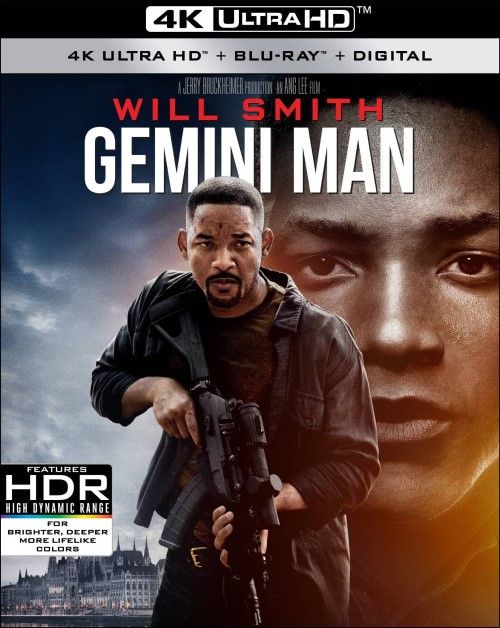 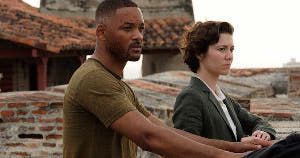 Movie
Ang Lee has always been a very passionate and intuitive director. Not all of his films work, but he really puts his heart and soul into them. He’s made some INCREDIBLE films in multiple different genres over the year (my mother’s favorite film is Sense and Sensibility), but lately he’s become really impassioned with moving visual film making in a new direction. One of his opinions is that without CHANGING something in film making, it is going to die out due to being stagnant. With that in mind he has pressed forward into making films in different frame rates and using much higher tech digital cameras to try and create a different feel and texture to the movie watching experience.

Gemini Man is his long awaited technical masterpiece, having been in production hell for well over a decade (almost two really) as the studios have awaited for the technology to catch up with Lee’s vision. Shot with 120fps 3D cameras, Gemini Man is a visually stunning film, but one that very well may be extremely controversial depending on HOW you watch the movie. There are only a few theaters in the entire U.S. that can project 120 fps 3D film, so many theaters were forced to show it in 120 fps 2D, or 60 fps 2D (and in some cases, not even that depending on studio age), so each person got to see it slightly differently. The Blu-ray format is only capable of traditional 24 fps viewing, but the 4K UHD disc (much like Billy Lynn’s Long Halftime Walk) is capable of 60 fps in 2D (no physical format is has the 3D presentation), and watching the two back to back produced a drastically different experience.

I’m honestly not sure whether the near two decade wait was worth it really. I understand that Ang Lee was using the movie as a vehicle for the 120 fps cinematography, but the story REALLY suffers quite a bit, while the video thrives. The film is about as deep as a paper mache tiger and really only serves as a near two hour vehicle for Ang Lee’s visual vision. If you watched the trailer then you know that there are no hidden secrets or plot for you to unravel. Will Smith is Henry Brogan, a government assassin who just wants to return after killing his 72nd mark. With his kills weighing heavily on his heart, Brogan settles down to fish, only to receive some information from an old friend that puts him at risk. His old agency, headed up by one Clay Verris (Clive Owen), wants him dead for that information, and sends after him the only person who can kill the best assassin in the world. Himself. 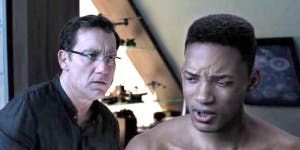 Yup, it’s that simple. Will Smith is cloned by Verris 23 years ago, and has built up a clone that is faster, better, and without the weaknesses and mental defects of his more “human” predecessor. It’s a plot device that we’ve seen in dozens of movies. The Reavers in Serenity/Firefly being one of the most prevalent. Playing God in order to make a better soldier or a better human. The rest of the movie is one giant chase scene as Henry and his accidental agency partner Danny (Mary Elizabeth Winstead) run from one corner of the globe with Henry’s young clone hot on their trail. The film is a mess of action scenes as Ang Lee uses some incredible angles and bits of cinematography to try and tell the tale visually.

The only problem is, the film is a bit TOO thin in the plot department. I don’t mind big, dumb, action movies at all. In fact I revel in them. But Gemini Man is so paper thin than the only thing holding it together is the incredible visuals and Will Smith’s Charisma. Benedict Wong, Clive Owen and Mary Elizabeth Winstead do their best with what they’re given, but the script really hamstrings their efforts at being anything other than stereotypes. Will Smith is honestly the best part of the whole cast, as he proves that he has most certainly not lost the charm and charisma that shot him to stardom in the 1990s. Ironically he gets to play two characters as well. Even though there’s a heavy layer of digital manipulation over the face of his stunt double, as they did in Rogue One for Princess Leia and Tarkin, he voices the young man simultaneously as Henry.

Rated PG-13, violence and action throughout, and brief strong language

Wowza. That’s about all I can say about the 4K UHD video quality. Right off the bat let me state that the 4K UHD experience is going to be wildly different than the 1080p viewing experience. While the 1080p Blu-ray is shown at 24 fps like the format allows, the 4K UHD specs allow Gemini Man to be played back at 60 fps (sadly not the 120 fps 3D that was shown in some theaters, but the film’s camera work is way ahead of it’s time for the lay person). As such it has that high frame rate look, with a ridiculously glossy soap opera feel to it. The detail levels are out of this world though. No matter what your opinions on high frame rate motion, the detail levels are so picture perfect that I honestly was surprised my TV could show that much detail and clarity. You can see lines and pores on the face, little hairs waiving on Will Smith’s arms as he racks the bolt back on his sniper rifle. The cinematography is also varied and uses some wild angles (such as that fish eye train passing moment in the first 6 minutes of the movie), and the use of a single camera following Henry and his clone on the initial motorcycle chase is amazing to view. Blacks are deep and inky, and the HDR is so rich and punchy with the colors. Watching the 1080p disc back to back showed a shocking difference in color pop and clarity, beside the obvious differences between 24 fps and 60. Also, the 4K viewing experience shows off much more of the CGI (such as when the clone takes the motorbike and does his little flips. The CGI is startlingly obvious above the Blu-ray). However, there was a much more 3 dimensional feel to the film that Blu-ray just couldn’t capture

Now, this portion of the video review is nothing but my subjective opinion. I haven’t held it against the video score at all, and is just my subjective take on the whole HFR issue. To me it was like watching a documentary or something. My brain couldn’t come to grips with the high frame rate soap opera look, despite the obvious increases in detail and clarity on the 4K disc. It completely took me out of the film and felt like I was watching the nature channel instead of a movie. Pop out the 4K UHD disc and put in the Blu-ray and suddenly I felt like I was watching a movie again. My brain accepted that it was a movie and I could enjoy it once more. Otherwise the 4K high frame rate really took me out of it and I had a very difficult time watching it.

The Dolby Atmos track (found on both the Blu-ray and the 4K UHD) is a stunner as well. Jumping around the sound stage at all times, it creates an incredibly immersive sound field for the listener. You can hear the wind whistling in the grass at the beginning, with that soft “schnick” of a bolt being ridden back, then the roar of a bullet train drowning out all other sounds. The dialog is well placed in the center of the room, with a solid balance as the action heats up and the fisticuffs, bullets and roaring motor engines revs into high gear. The LFE is powerful and deep, but doesn’t try to over cook itself like so many action movies do. When called upon it can shake the entire foundation, while at other times it adds a deep punch to an impact, or a low end hum that just pulsates and rises up from the background. Surrounds are wildly active, and the overhead usage is stunning. A motorcycle flies overhead and lands in the back of the room, and at other times you can hear the individual scrapes and footfalls as the clone leaps from wall to rooftop to floor. 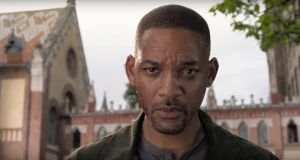 • Visual Effects Progression presented by WETA—In 60FPS, Ultra HD and High Dynamic Range (on 4K UHD disc only)
• Alternate Opening
• Deleted Scenes
• The Genesis of Gemini Man
• Facing Your Younger Self
• The Future Is Now
• Setting the Action
• Next Level Detail
• The Vision of Ang Lee

For a film that has been in pre-production for almost two decades (so long that Harrison Ford, Clint Eastwood and even Nic Cage were once attached as the leads), I was expecting something a bit “more” if you know what I mean. The movie is a technological marvel as Ang Lee has really pushed the limits of high frame rate technology, but the story is just a paper thin framework for him to hang all of the technology on, and my enjoyment suffered as a result. I won’t lie. The 4K UHD disc is not going to be for everyone, and even though it was a marvel to watch, I guiltily enjoyed the Blu-ray more, as it felt like a real movie to me, rather than a soap opera tech experiment. That being said, both discs are reference material for their particular formats and the stunning audio mix is present on both discs.

I feel like this and all HFR movies are a perfect example of just because you can do something doesn't mean that you should. Having said that I think it would of been fun just from a technical perspective to see it at 120fps in 3D
You must log in or register to reply here.
Share:
Facebook Twitter Reddit Pinterest Tumblr WhatsApp Email Link